Yankees slugger Judge scratched from lineup due to illness 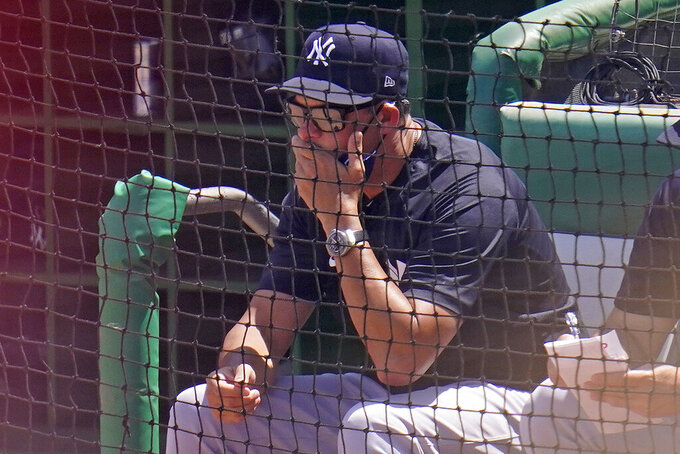 TAMPA, Fla. (AP) — Yankees slugger Aaron Judge was scratched from the lineup for Monday’s spring training finale against Detroit due to illness but is set to play on opening day after clearing MLB’s coronavirus protocols.

“He should be good to go,” Yankees manager Aaron Boone said after a 5-2 loss to the Tigers.

“We sent him through all the protocols and thankfully we’ve eliminated all the stuff other than the fact that every now and then you come up with not feeling really well,” Cashman said. “He’s not been the first one that had to deal with that at camp.”

Cashman and most of the Yankees’ personnel have not received vaccinations yet but that will likely change soon as eligibility is lowered to younger age groups.

“Making sure everybody gets staggered out properly, vaccinated, feeling good from it,” Cashman said. “We’re just patiently waiting for those windows to be cleared and a runway to land on. We know those days are coming sooner than later because things are opening up around the country and that’s great for everybody.”

Wilson, slowed by tightness in his throwing shoulder, threw off a mound Monday but will need additional bullpen and batting practice sessions before returning.

Voit, expected out until May, was scheduled to undergo surgery Monday night in New York with New York Mets medical director Dr. David Altchek at the Hospital for Special Surgery to repair a partial meniscus tear in his left knee.

Cashman said infielder Tyler Wade and righty Michael King will be on the opening day roster. The last spot on the roster will be filled by Wilson’s replacement.

Chirinos is expected to be out until May following surgery to repair a fractured right wrist.

Boone had a pacemaker inserted during surgery on March 3 in Tampa and continues to rave about how things are going.

“I feel great,” Boone said. “I've gotten built up here now these last few weeks as well. As I said when it happened, it was a game changer for me immediately and it remains that way. Excited along with the guys to get this thing going (on Thursday).”

Former Yankees right-hander Masahiro Tanaka was quoted by a Japanese newspaper as saying his decision to return and pitch in Japan this year factored in racism he and his family faced last year due to the novel coronavirus pandemic.

Cashman said Tanaka never told him about the situation.