In years before outbreak, investment in public health fell 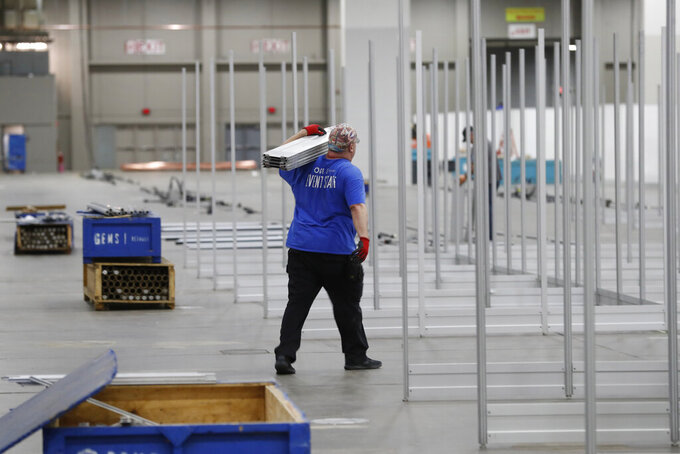 In this April 1, 2020, photo work continues at the TCF Center to build temporary hospital rooms in the convention center in Detroit. In the decade before Michigan and its largest city became the latest hotspot for the deadly coronavirus, officials were steadily cutting back on their first line of defense against pandemics and other health emergencies. Approaching bankruptcy, Detroit disbanded most of its public health department and handed its responsibilities to a private nonprofit. (AP Photo/Carlos Osorio)

In the decade before Michigan and its largest city became the latest hot spot for the deadly coronavirus, officials were steadily, and at times dramatically, cutting back on their first line of defense against pandemics and other public health emergencies.

Approaching bankruptcy, Detroit disbanded most of its public health department and handed its responsibilities to a private nonprofit. When the department reopened in 2014 in the back of the municipal parking office, its per capita budget was a fraction of other big cities', to serve a needier population.

In Ingham County, home to the capital city of Lansing, then-Public Health Director Renee Branch Canady sat down at budget time every year for seven straight years to figure out what more to cut.

“It was just chop, chop, chop,” Canady said. By the time she left in 2014, all the health educators, who teach people how to prevent disease, were gone.

What happened in Michigan also played out across the country and at the federal level after the 2008 recession, which caused serious budget problems for governments. But as the economy recovered, public health funding did not, a review of budget figures and interviews with health experts and officials shows.

A shortfall persisted despite several alarming outbreaks, from H1N1 to Ebola, and has left the U.S. more vulnerable now to COVID-19, experts say. In normal times, public health workers are in the community, immunizing children, checking on newborns and performing other tasks. In a health emergency, they're tracing outbreaks, conducting testing and serving as “first responders” when people fall sick — efforts that are lagging in many states as the coronavirus spreads.

“Our funding decisions tied their hands,” said Brian Castrucci, who worked with health departments in Philadelphia, Texas and Georgia and is now president of the de Beaumont Foundation, a health advocacy organization.

The cuts came under both Democratic and Republican administrations. While there is no single number that reflects all federal, state and local spending, the budget for the federal Centers for Disease Control, the core agency for public health, fell by 10 percent between fiscal year 2010 and 2019 after adjusting for inflation, according to an analysis by the Trust for America’s Health, a public health research and advocacy organization. The group found that federal funding to help state and local officials prepare for emergencies such as the coronavirus outbreak has also fallen — from about $1 billion after 9/11 to under $650 million last year.

Between 2008 and 2017, state and local health departments lost more than 55,000 jobs — one-fifth of their workforce, a major factor as cities struggle to respond to COVID-19.

“It definitely has made a difference," said John Auerbach, Trust for America's Health CEO and a former public health director in Massachusetts.

New York has seen the most COVID-19 cases in the U.S., but numbers are surging in places such as Detroit, where those testing positive nearly tripled in the week between March 28 and Saturday, when officials said the city was approaching 4,000 cases, with 129 deaths. A more robust health system could have done more earlier to track down and isolate people who were exposed, said the city's former health director, Abdul El-Sayed.

State spending on public health in Michigan dropped 16% from an inflation-adjusted high point of $300 million in 2004, according to a 2018 study.

Some of the funding problems, Canady and other public health advocates believe, stem from a fundamental belief in smaller government among Republican governors, including former Michigan Gov. Rick Snyder, who called for “shared sacrifice” after the state's auto-dependent economy was battered by the recession.

In Kansas, then-Gov. Sam Brownback ran what he called a “red-state experiment” to cut taxes. State spending on its Public Health Division, outside of federal funds, dropped 28% between 2008 and 2016.

The cuts meant a “shifting of responsibility for services from the state level to the county level," Democratic Gov. Laura Kelly said in an interview. "And we saw that in public health."

In Maine, then-Gov. Paul Le Page's administration stopped replacing public health nurses who were dealing with families in the opioid crisis. The number of nurses fell from around 60 to the low 20s before the Legislature tried to reverse the action.

Although agencies often receive emergency funding when a crisis strikes, the infusion is temporary.

“Decisions are made politically to support something when it becomes an epidemic,” said Derrick Neal, a public health official in Abilene when Ebola surfaced in Texas. “And then as time passes, the funding shrinks.”

In Oklahoma, state funding for the Department of Health still hasn’t returned to its levels of 2014, when a combination of slumping oil prices, tax cuts and corporate breaks punched a giant hole in the state’s budget. When state revenues later improved, the money went to other priorities.

“It’s much easier to cut funding for public health than it is to start taking away benefits from people or access to care for people," said former state Rep. Doug Cox, an emergency room doctor.

Castrucci said the problem with providing more money only at times of emergency is it doesn't allow time to recruit and train new workers.

“We waited until the house was on fire before we started interviewing firefighters,” he said.