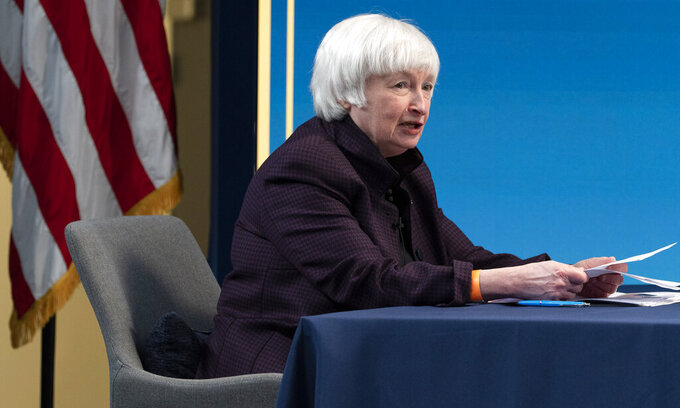 Yellen told members of the Financial Stability Oversight Council that she wants the panel to examine what needs to be done to better protect the financial system from further turmoil. It should also study the impact of climate change on the stability of financial institutions, she said.

“Almost exactly one year ago, the pandemic’s outbreak caused significant stress in the economy and in the financial system,” Yellen told the panel during its public session. “In response to the deep uncertainty, investors sought safety in the form of cash and sort-term government securities. Bond markets became illiquid.”

Yellen said that the country is now “digging out of a deep hole,” but she said the hole could have been even deeper if not for swift rescue actions by the Federal Reserve, Treasury and Congress and by the regulations passed in response to the 2008 financial crisis.

“But the fact that extreme policy interventions were still required to support market functioning should serve as a clear reminder: We have to do more to address vulnerabilities in the financial system,” Yellen said.

Her comments marked a change in tone from the Trump administration. Then-Treasury Secretary Steven Mnuchin and other panel members searched for ways to lessen the burden of financial regulations that had been imposed by the Dodd-Frank Act passed in response to the 2008 financial crisis.

The stability panel, which was created by the Dodd-Frank law to address failures to coordinate oversight, includes the heads of government regulatory agencies including Treasury, the Federal Reserve, the Office of the Comptroller of the Currency and the Securities and Exchange Commission.

Yellen said the examination of last year’s financial market turmoil would include a review of potential reforms for money market mutual funds and the operation of hedge funds. Yellen said the council’s review would also address ways to make the Treasury securities market more resilient to future disruptions.

The council will also examine ways to make financial institutions more resilient to the threats imposed by climate change, she said.

“We know that storms will hit us with more frequency and more intensity,” Yellen said. “Our financial system must be prepared for the market and credit risks of these climate-related events.”