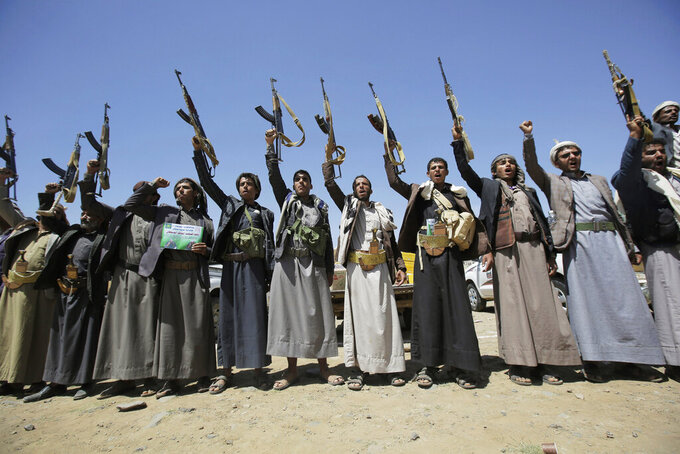 FILE - In this Saturday Sept. 21, 2019 file photo, Shiite Houthi tribesmen hold their weapons as they chant slogans during a tribal gathering showing support for the Houthi movement, in Sanaa, Yemen. On Wednesday, April 8, 2020, the Saudi-led coalition fighting the Iranian-backed Houthi rebels in Yemen announced that its forces would begin a cease-fire starting at midnight, in what could pave the way for the first direct peace talks between the two sides that have been at war for more than five years. (AP Photo/Hani Mohammed)

The case is a 73-year-old Yemeni national who works at the port of al-Shahr in Hadramawt province, Yemen’s Minister of Health Nasser Baoum told The Associated Press. The man is in stable condition, the minister added, without providing further details.

Yemen is a uniquely dangerous place for the coronavirus to spread. Repeated bombings and ground fighting over five years of war have destroyed or closed more than half its health facilities. Deep poverty, dire water shortages and a lack of adequate sanitation have made the country a breeding ground for disease.

Health officials have dreaded the virus’ eventual appearance in the country.

“We have been saying since the declaration of the pandemic that the introduction of such a case in Yemen would be catastrophic,” said Altaf Musani, representative of the World Health Organization in Yemen.

The Saudi-led coalition fighting the Iran-backed Houthi rebels declared a cease-fire on Thursday on humanitarian grounds, to prevent the spread of the pandemic. However, fighting continued unabated on Friday, diminishing hopes of a truce that could open doors for peace talks.

Yemen’s war erupted in 2014, when the rebels seized the capital, Sanaa, and much of the country’s north. The U.S.-backed, Saudi-led coalition intervened to oust the rebels and restore the internationally recognized government. The conflict has killed over 100,000 people and largely settled into a bloody stalemate.

The U.N. has described Yemen as the world’s worst humanitarian disaster. Over 24 million people in the country require humanitarian assistance, many of them on the brink of starvation.

Hadramawt recently witnessed an outbreak of dengue fever, with hundreds of cases filling the public hospital of al-Shahr, where the coronavirus case was detected.

In Yemen's under-equipped and barely functioning health system, it's hard to distinguish among different viral diseases. Some of the symptoms of dengue fever are similar to the ones in COVID-19, the illness caused by the coronavirus, including muscle aches, fever and difficulty breathing.

“That makes it very difficult to say whether or not coronavirus has already spread in Yemen," said Yousra Semmache, advocacy director for Save the Children.

One young man with dengue fever died after a hospital in Mukalla, the provincial capital of Hadramawt, refused to admit him for fear he was carrying the coronavirus, two local aid and government officers said, speaking on condition of anonymity because they weren't authorized to speak to reporters.

To try to curb the spread of the virus, provincial Gov. Farag al-Bouhsni announced on his Facebook page a partial curfew and placed all workers at the al-Shahr port under a 14-day quarantine. Residents criticized the governor for not shutting down all ports in Hadramawt, which are the main lifeline for aid and commercial shipments for southern Yemen.

The adjacent governorate of al-Mahra, which also borders Oman, sealed off its entry points just hours after the announcement from Hadramawt. Yemen's Ministry of Religious Endowment said mosques will be closed to mass prayers as well as Quran teaching sessions.

Even before the war, Yemen was the Arab world's most impoverished country, the majority of its population living in rural areas, far from health facilities. With the country relying on imports for 90% of its basic needs, the Saudi-led coalition's blockade triggered price hikes. Political infighting led to suspension of salaries for government employees, including medical staff, while corruption deprived millions of access to humanitarian aid.

According to WHO data, 15% of Yemen’s districts have no doctors, with an average of 10 health workers and less than 5 hospital beds for every 10,000 people.

U.N. special envoy Martin Griffiths said he gave the Yemeni government and the Houthis revised proposals on Friday for agreements on a nationwide cease-fire, urgent resumption of the political process, and economic and humanitarian measures “to alleviate the suffering of the Yemeni people"and to support the country's “ability to respond to the crisis of COVID-19.”

“I urge the parties to accept these proposed agreements without delay and begin working together through a formal political process to comprehensively end the war,” Griffiths said in a statement.

Elsewhere in the Mideast, the number of coronavirus infections rose in Israel, with the Health Ministry on Friday reporting more than 10,000 cases, including 92 deaths. The government imposed strict measures to contain the pandemic early on, closing borders, grounding flights and shuttering all non-essential businesses. But the virus tore through its insular ultra-Orthodox religious community, as many ignored guidelines on social distancing.

The tightened lockdown left many alone in their homes for the Passover holiday this week, with no visitors allowed, not even immediate family. When it emerged that Israel’s figurehead president, Reuven Rivlin, had nonetheless hosted his daughter for the traditional Seder dinner, outrage spread on social media. Rivlin acknowledged the criticism and apologized on Friday.

The virus causes mild to moderate symptoms in most patients, who recover within a few weeks. But it can cause severe illness or death, particularly in older patients or those with underlying health problems.

The Palestinian Authority, which governs parts of the occupied West Bank and also imposed a widespread lockdown early on, reported its second virus death, out of 253 confirmed cases. It says 45 people have recovered.

Also Friday, authorities in Oman ordered those living in the capital, Muscat, to remain there while banning people from traveling into the city over the virus. The country has more than 450 confirmed cases with two confirmed deaths.

There are more than 134,000 confirmed cases of the coronavirus in the Middle East, including over 5,300 fatalities. Some 4,200 of those deaths are in Iran, which has the largest outbreak in the region. Authorities there had recorded over 68,000 total cases as of Friday.