Zeta's toll on a Louisiana island: 'Like a bomb was dropped' 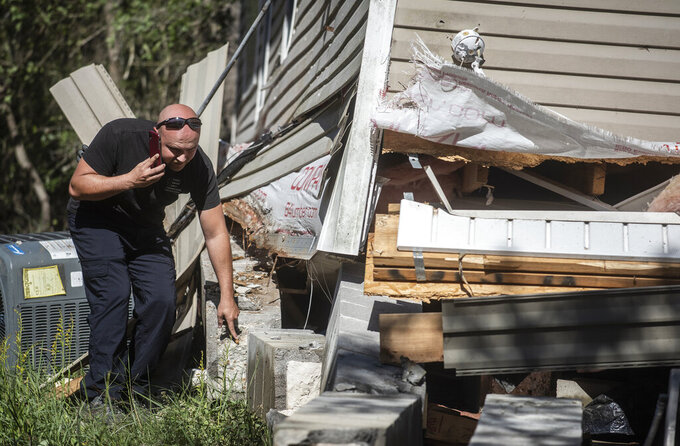 GRAND ISLE, La. (AP) — Mark Andollina remembers stinging rain and a howling wind that peeled the roof off part of his Cajun Tide Beach Resort on Grand Isle, the Louisiana barrier island town where residents were among the first to feel the ferocity of Hurricane Zeta.

Andollina was salvaging what he could Friday morning, picking up pieces of reusable scrap wood, while mulling what it will take to repair and reopen. He said residents there believe Zeta spawned at least one tornado. “I guess that's what did it,” he said. “Because we got the most damage on the island right here, basically in the middle of the island.”

“The middle of the island looks like a bomb was dropped,” said Dodie Vegas, who with her husband owns Bridge Side Marina on the west side of the island.

Part-time town resident Jimmy Ellis, a New Orleans area physician, said his raised camp survived, but he spent Friday morning retrieving fishing equipment and pieces of an LSU mural that washed away when water swept beneath it.

Zeta came ashore on the southeast Louisiana coast, near Cocodrie, on Wednesday evening with 110 mph (177 kph) winds, just shy of Category 3 strength. It hit hard on Grand Isle, a popular waterside getaway and recreational fishing destination. With a population of about 1,500, the seaside landscape is dominated by rustic fishing camps and vacation homes on pilings high above the flood-prone ground.

Zeta lifted away roofs, snapped telephone polls and washed away parts of a levee designed to protect the narrow island from storm surge.

Andollina rode it out, despite an evacuation having been ordered a day before, when the storm was expected to be a relatively weak, Category 1 hurricane. Zeta's speed and intensity caught many on the coast off guard.

“That thing just souped up and kicked all of our butts, especially the levee,” said Lan Tivet, a member of the Grand Isle town council. She had been away from the island on family business as the storm approached and was getting reports from town officials as she made her way back Friday.

Zeta's remnants moved off the northeastern U.S. coast Thursday night. But its effects were evident Friday through a swath of the Southeast. From south Louisiana to Virginia an estimated 1.3 million homes and businesses remained without power as of midday. Restoration, for many, was expected to take days.

Six deaths have been blamed on the storm. A man was electrocuted by a downed live wire in New Orleans. Four people died in Alabama and Georgia when trees fell on homes, authorities said, including two people who were pinned to their bed. In Biloxi, Mississippi, a man drowned when he was trapped in rising seawater.

Zeta was the 27th named storm of a historically busy year, with more than a month left in the Atlantic hurricane season. It set a new record as the 11th named storm to make landfall in the continental U.S. in a single season, well beyond the nine that hit in 1916. And the coronavirus pandemic has only made things more difficult for evacuees.

It's been an especially active season in Louisiana, hit so far by two tropical storms and three hurricanes, including Laura, which devastated southwestern Louisiana in August.

“We have three sets of hurricane evacuees that are sheltering in Louisiana simultaneously,” Gov. John Bel Edwards noted during a Friday news conference. That included 3,051 people whose homes were damaged or destroyed by Laura, 172 from Hurricane Delta, which hit weeks later in the same area, and 27 from Zeta.

Zeta toppled trees in New Orleans and the surge tossed a shrimp boat into a front yard in coastal Mississippi. The mayor of Thomasville, Alabama, reported hundreds of downed trees, blocking trees and damaging homes.

As a weakening tropical storm, Zeta was blamed for a landslide that blocked a North Carolina road, severing access between mountain counties and forcing motorists to take a 90-mile detour, authorities said.

With just a few days until Tuesday's election, there were concerns about some voters’ ability to get to the polls. Edwards said Louisiana officials were working to identify areas where damage or power outages might require a change in polling locations.

And the 2020 hurricane season isn’t over. Forecasters said disturbed air off the northern coast of South America could become a tropical depression and head toward Nicaragua by early next week.

Tivet, the Grand Isle Council member, is hoping to make it to the end of hurricane season in November without another hit on the levee that protects the island from storm surge. She said the state coastal protection agency plans a major project that includes building up the beach with sand and protecting it with rock barriers.

“We're so close to the end of hurricane season that we can't jeopardize — just start a project sooner — it's not an option," she said. "The best we can do for now is just pray for no more storms.”

This story has been updated to correct the spelling of Andollina.