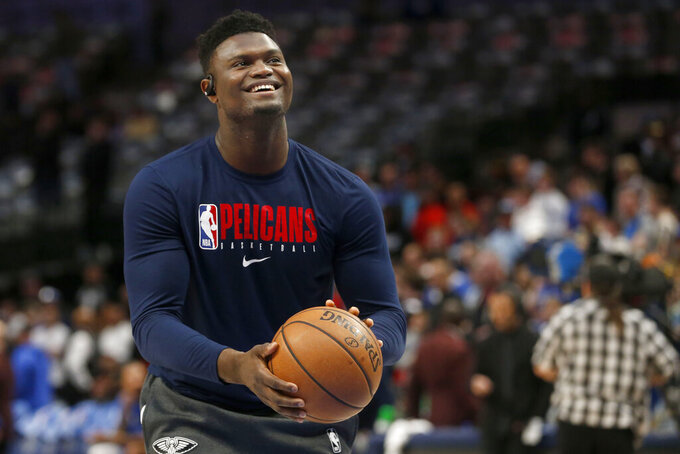 FILE - In this March 4, 2020, file photo, New Orleans Pelicans forward Zion Williamson shoots free throws prior to an NBA basketball game against the Dallas Mavericks in Dallas. Pelicans rookie Williamson says he feels like he is in good shape as he prepares to help lead New Orleans' eight-game push to make the NBA playoffs. (AP Photo/Michael Ainsworth)

It has served the NBA’s top overall draft choice well during a highly unusual debut season that has gone nothing like he imagined, yet still holds plenty of promise.

“The last 12 months have been a different experience,” Williamson said Thursday, projecting his typically affable, smiling, easy-going manner during a video conference at the New Orleans Pelicans’ practice headquarters. “My mom tells me, ‘Life is life. You may go through a lot of bad times. You may go through a lot of good times. It’s just: Try to prepare yourself as best as you can.’”

Now Williamson and the Pelicans are preparing to make a “playoff push,” something that appeared highly unlikely when he was sitting on the sidelines with a surgically repaired knee, watching New Orleans labor through a franchise-worst 13-game losing streak that left the club with a record of 6-22.

“I think this team can be really special when we’re all healthy,” Williamson said.

The 6-foot-6, 285-pound Williamson was expected to be out six to eight weeks when he had surgery to repair his torn right lateral meniscus the day before the regular season. He wound up missing about three months and 44 games. When he finally returned on Jan. 22, fans packed the stands and Williamson routinely delighted them with around-the-rim highlights.

Williamson averaged 23.6 points and 6.8 rebounds in the 19 games he played. New Orleans won 10 of those games and looked to be gaining momentum when the season was suspended March 11 because of the coronavirus pandemic.

Still, that stint kept the Pelicans close enough to the playoff picture – 3 1/2 games behind Memphis for the eighth and final playoff seed in the Western Conference -- to be included among 22 NBA teams that will finish their regular seasons at a central location in Orlando, starting July 30, when New Orleans plays the Utah Jazz.

“If we had him in the beginning of the year, the story wouldn’t be fighting for the eighth seed,” Hart continued. “It would have been, we’re the four or five seed in the West, honestly.”

Williamson quickly developed an on-court synergy with creative, play-making, up-tempo point-guard Lonzo Ball. Williamson was praised by teammates and coaches for an unselfishness that has allowed other players like Pelicans leading scorer Brandon Ingram to continue to flourish.

Because Williamson’s surgery and rehab had occurred this season, he qualified for an exception that allowed him to continue to seek treatment and work out at the Pelicans’ practice center after team training headquarters around the NBA had been closed to most employees and players.

But Williamson said he remained vigilant about not exposing himself to the coronavirus, performing on-court work only with his stepfather until this week, when the NBA allowed team facilities to reopen to all virtually players except those with positive coronavirus tests.

“At first, it was very tough because even now you don’t fully know what’s going on” with the virus, Williamson said. “Me and my stepdad just found different ways to stay in condition on the court, off the court, wherever we could find it. I do feel like I’m in good shape right now.”

Pelicans general manager David Griffin has caught glimpses of Williamson’s workouts. He said he couldn’t say for sure how Williamson’s game looked because he wasn't able to work against other NBA caliber players.

“I can tell you he is handling the ball awfully well, and his shooting looks great,” Griffin said. “In terms of his preparedness and fitness for basketball, I can’t give you any indication of that at all.”

Williamson said his early priorities will include bonding with teammates again.

“We’ve got to stick together, keep our emotions high together and I think we’ll be fine,” he said.

Williamson’s eagerness to take on a leadership role comes despite his youth and relative inexperience in the NBA. He turned pro after one season of college basketball at Duke and doesn’t turn 20 until Monday. But he became a global internet sensation while he was still in high school and has been flooded with endorsement offers since his college career ended.

He also encountered another side of the sports business when he was sued for $100 million by his first marketing agent after he fired her in favor of another. That case is ongoing.

“In a weird way I haven’t felt like a teenager in a long time," Williamson said, “so I feel like it’s not going to be anything different.”

Meanwhile, Williamson indicated that his disappointment over no longer playing in front of fans this season is outweighed by his enthusiasm for returning the sport he loves in games that matter.

“It’s definitely going to be different. You know, I love the fans,” Williamson said. “It’s crazy, man. We’re actually about to go. It’s a lot to process for sure, but I am excited.”