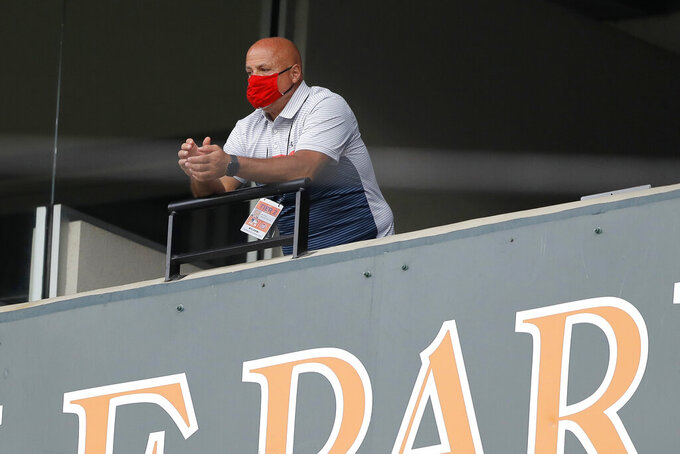 FILE - In this Aug. 14, 2020, file photo, Washington Nationals general manager Mike Rizzo looks on during the seventh inning in the continuation of a suspended baseball game between the Baltimore Orioles and the Nationals in Baltimore. On Wednesday, March 31, 2021, Rizzo said a player for the team has tested positive for COVID-19. Rizzo said that four teammates and a staff member have been quarantined on the eve of the start of the regular season after contact tracing. (AP Photo/Julio Cortez, File)

WASHINGTON (AP) — A Washington Nationals player tested positive for COVID-19, and four teammates and a staff member have been quarantined after contact tracing on the eve of the regular season's start, general manager Mike Rizzo said Wednesday.

Rizzo did not identify any of the six members of the organization who are involved.

“We’re still in the process of finding out exactly what their status is,” Rizzo said. “They’re certainly out for tomorrow’s game.”

The 2019 World Series champions — who finished tied for last in the NL East in the pandemic-shortened 2020 season — are scheduled to host the New York Mets on Thursday night, with Max Scherzer facing Jacob deGrom in a matchup between pitchers who own a total of five Cy Young Awards.

“We will certainly have some roster decisions to make, depending on how this all shakes out,” Rizzo said in a video conference with the media.

The positive result came from a test conducted Monday, while the Nationals were still in Florida for spring training. Word of the test came a little after 1 a.m. Wednesday, after the team already had traveled home to the nation's capital, Rizzo said.

The flight home was where there was close contact between the five who are quarantining and the player who tested positive.

Scherzer said he was not on that team flight and traveled separately with his family.

The Nationals — who had planned to have a workout at their stadium on Wednesday, before it was called off because of rain — did not have a single player test positive during their six weeks of spring training camp in West Palm Beach, Florida, according to Rizzo.

“We’ve done so well in spring training,” Scherzer said. "Everybody across the game — we had seen so few positive cases across spring training as a whole. It just shows you how quickly that can turn. It can turn on a dime. We have to face it, and we have to overcome it.”

Rizzo said the team underwent a new round of COVID-19 tests Wednesday, as was previously scheduled — a combination of rapid tests and MLB-mandated saliva tests.

“We’re ready for the long haul. This is just a small blip on our radar screen. We’re going to handle it and take it in stride,” Rizzo said, noting there are players available to be brought in from the club's alternate training site in Fredericksburg, Virginia. “This is the reason you have 60 good players in the organization, to kind of prepare for these type of ... scenarios.”