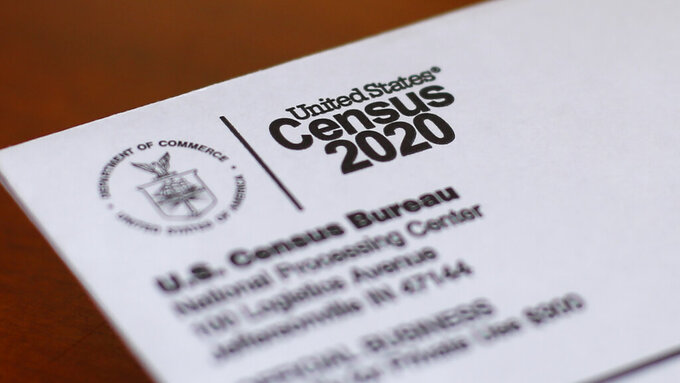 FILE - This April 5, 2020, photo shows an envelope containing a 2020 census letter mailed to a U.S. resident in Detroit. A group of Harvard researchers are coming out against the U.S. Census Bureau's use of a controversial privacy method on the numbers used for redrawing congressional and legislative districts, saying it doesn't produce data that are good enough for redistricting. (AP Photo/Paul Sancya, File)

The letter addressed to Commerce Secretary Gina M. Raimondo said the governors recognize the difficulties associated with completing the decennial Census during the coronavirus pandemic, which has postponed release of redistricting data until mid-August.

But the letter also said the ongoing delay puts states “in a nearly impossible situation to redraw lines prior to the 2022 election cycle” in U.S. House and state legislative districts.

The governors asked that redistricting data be released this month or as soon as possible.

“Further delaying the release of redistricting data negatively impacts redistricting efforts nationwide, places state governments in an unnecessarily precarious position, and presents compounding delays in operations at every level of government,” said the letter to Raimondo, an appointee of Democratic President Joe Biden.

The Census is completed every 10 years and is essential for determining population numbers and other key demographics. Census data is used for redrawing congressional and legislative districts, determining how many congressional seats each state gets, and deciding how $1.5 trillion in federal spending is distributed each year.

As part of a settlement agreement in a lawsuit brought by the state of Ohio, the Census Bureau promised in May to release the redistricting data no later than Aug. 16 — a date it had previously picked for releasing the numbers in an older format.

Ohio sued the Commerce Secretary earlier this year after the Census Bureau said it would be unable to meet a legal deadline to release the redistricting data to the states by March 31 because of delays caused by the pandemic. The bureau said in February that the data would be available in an older format in mid-August and in a more user-friendly format by the end of September. A federal judge dismissed Ohio’s case and the state appealed, saying the delay threatened its ability to meet redistricting deadlines approved by voters and set in its state constitution.

An appellate panel later said Ohio had standing to sue the Census Bureau. It sent the case back to the lower court to come up with a solution.

Still pending is a lawsuit filed by the state of Alabama against the Census Bureau in an effort to get the statistical agency to release the redistricting data before August. Alabama’s lawsuit also challenges the bureau’s use of a statistical method that Census Bureau officials say is needed to protect participants’ privacy, but which the state says damages accuracy. A three-judge panel could issue a ruling any day.

After the redistricting data is released in August and September, the Census Bureau also plans to release other data sets derived from the 2020 census, including tables on housing, family relationships in households and the age and sex of household members in areas as small as neighborhood blocks.