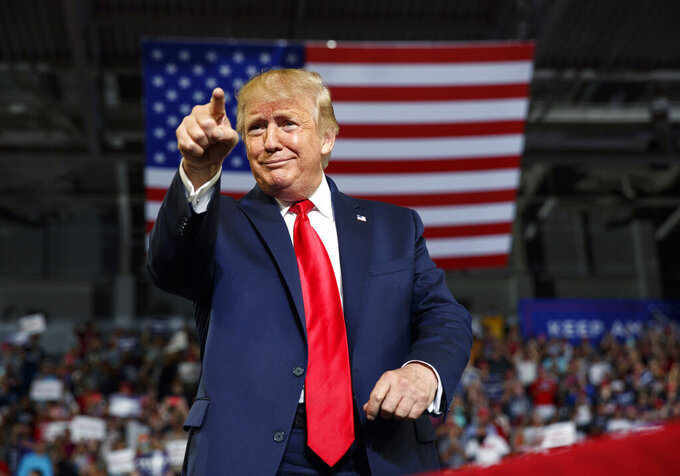 FILE - In this Wednesday, July 17, 2019 file photo, President Donald Trump gestures to the crowd as he arrives to speak at a campaign rally at Williams Arena in Greenville, N.C. Donald Trump’s first impeachment trial centered on a phone call that Americans never heard with the leader of a country far away, Ukraine. His second was far different. It centered on the rage, violence and anguish of one day in Washington itself. Together the two impeachment trials Trump faced illustrated his ability to escape consequences for actions that even many Republicans denounced. (AP Photo/Carolyn Kaster, File)

WASHINGTON (AP) — Donald Trump's first impeachment trial centered on a phone call Americans never heard with the leader of a country very far away. The trial went on for two weeks of he-said-she-said. There was a mountain of evidence to pore over but not one drop of blood to see.

Trump's second impeachment trial was a steroidal sequel centered on the rage, violence and anguish of one day in Washington. There was nothing foreign or far away about it. There was blood.

Together these trials a year apart spoke to one president's singular capacity to get into, and out of, trouble — the story of Trump's life. The only president to be impeached twice has once again evaded consequences, though this time as an election loser shunted off the field of play to the jeering section, at least for now.

In a broadside against Trump every bit as brutal as that leveled by Democrats, Senate Republican leader Mitch McConnell declared the ex-president “practically and morally responsible for provoking the events of the day” with his “unconscionable behavior" and “disgraceful dereliction of duty.”

“The leader of the free world cannot spend two weeks thundering that shadowy forces are stealing our country and then feign surprise when people believe them and do reckless things," McConnell said.

But this was after he gave Trump an escape hatch for the ages, voting to acquit him on the grounds that the Senate, in his view, cannot legitimately try a president out of office.

Until the conclusion of the five-day trial, the noisiest man in America stayed silent, down in Florida. But the panic, terrified whispers of officials hiding from their attackers and the crack of a fatal gunshot played out on a big screen in the Senate chamber penetrated less than six weeks earlier by the Trump-flag-waving insurrectionists.

This time the case did not hang on a whistleblower in the bowels of the national security bureaucracy.

This was an impeachment driven by what people saw happen and by Trump's voluminous public rhetoric, heard that day, for weeks before, and after — until Twitter exiled him and he let his lawyers and supporters do the talking while the trial played out.

“We saw it, we heard it, we lived it," said the Democratic majority leader, Sen. Chuck Schumer. "This was the first presidential impeachment trial in history in which all senators were not only jurors and judges but were witnesses to the constitutional crime that was committed.”

Trump's fanciful boast five years ago that he could shoot someone in the middle of New York's Fifth Avenue and still be loved by his followers was never, of course, put to the test in his presidency. But something like it was, on Pennsylvania Avenue.

On Jan. 6, he sent his followers down that street to the Capitol, where they committed their mayhem. And in the end, that did not cost him the loyalty of enough supporters in Congress to convict him on the charge of inciting an insurrection.

The Senate acquitted Trump on a 57-43 vote Saturday, well short of the 67 needed to convict him.

“Sorry haters, I’m not going anywhere," Trump declared after his Senate acquittal Feb. 5, 2020, on charges of abusing power and obstructing justice. The Senate, then under narrow Republican control, voted 52-48 to clear him of abuse of power and 53-47 to clear him of obstruction.

It had taken Democrats some four months to get to that point, grinding through congressional inquiries into Trump's effort to persuade Ukraine to investigate Hunter Biden's business dealings there. The goal was to tarnish Joe Biden, the father, as he sought the Democratic nomination and the presidency.

Hundreds of millions of dollars in U.S. military aid needed by Ukraine in its conflict with Russia were hanging in the balance. The power and resources of the U.S. government had been put in service of Trump's personal political benefit, said the Democrats.

To many Republicans in Congress, Democrats were merely impeaching Trump for being Trump. For others, Trump's behavior, while troubling, didn't rise to the extraordinary level they said was required to try to remove a president between elections.

“I would like you to do us a favor,” Trump told Ukrainian Volodymyr Zelenskiy, uttering the sentence that emerged from a rough transcript of their phone call and came to symbolize the heavy-handed lobbying by the president and his aides.

Trump unleashed over 270 tweets when his fate was in the Senate's hands, many attacking the process and the participants. “Our case against lyin’, cheatin’, liddle’ Adam ‘Shifty’ Schiff, Cryin’ Chuck Schumer, Nervous Nancy Pelosi, their leader, dumb as a rock AOC, & the entire Radical Left, Do Nothing Democrat Party, starts today," said one.

The verdict came strictly along partisan lines, with one exception. Republican Sen. Mitt Romney of Utah voted with Democrats to convict Trump of abusing power.

McConnell, fully with the president on this one, was ready to move on. “As far as I’m concerned, it’s in the rearview mirror," he said in response to Trump's acquittal.

So it was for nearly everyone, quite suddenly. In the trial's final days, the U.S. declared a public health emergency due to the coronavirus outbreak, already spreading, and the first COVID-19 death was recorded in the country by the end of the month.

Trump went tweetless during impeachment No. 2, blocked from his main social media platforms for his history of false statements and conspiracy theories about the election. He stayed low, no longer popping up for his once-frequent interviews with conservatives on TV, either.

As in the first impeachment, no witnesses were called.

The House Democratic impeachment managers came forward with new and graphic video from the assault and a clearer picture of how close the lawmakers trapped at the Capitol had been to the attackers hunting for them. The peril to Trump's vice president, Mike Pence, who was presiding in the Senate during the day's election certification, also came into sharper relief.

If there was anything like a smoking gun, it had been fired in plain sight.

But there was little more suspense about the outcome than there had been for the Ukraine affair. Democrats never expected to win the necessary two-thirds of the vote. Seven Republicans voted with the Democrats in the end, more than anticipated but not enough. Romney was among them.

It was known on the final day that McConnell would vote to acquit.

It was not known that he would denounce Trump with such scorching words even while passing the hot potato to the Biden Justice Department or state attorneys general, with the observation that Trump the private citizen now is exposed to criminal and civil laws.

“He didn't get away with anything,” McConnell said. “Yet.”