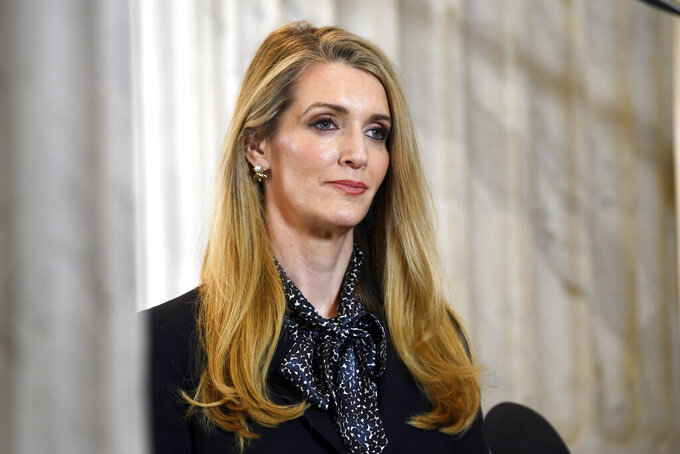 FILE - In this March 20, 2020, file photo, Sen. Kelly Loeffler, R-Georgia, waits to speak in a television interview on Capitol Hill in Washington. Loeffler was appointed to the U.S. Senate last year on the hope that she would help the GOP hold on to moderates uncomfortable with the party’s right turn under President Donald Trump. (AP Photo/Susan Walsh, File)

WASHINGTON (AP) — Two staff members for Republican U.S. Sen. Kelly Loeffler of Georgia tested positive for the coronavirus, but a subsequent test of the senator came back negative, the senator's office said Saturday.

Loeffler was tested on Friday after learning about the positive tests of two Senate staff members, her office said in a brief statement.

The statement did not say whether the senator had close contact with the staff members or planned additional tests. An email to a spokesman was not immediately returned.

The Centers for Disease Control and Prevention says people who have been in close contact with someone with COVID-19 should quarantine for two weeks. Loeffler was “more energized than ever to vote to confirm Amy Coney Barrett as the next Supreme Court Justice on Monday before returning home and traveling the state to meet with hardworking Georgians," the statement said.

She is trying to hold on to the seat this November, but faces a tough challenge from fellow Republican Doug Collins, a four-term congressman, and Democrat Raphael Warnock, pastor of the Atlanta church where the Rev. Martin Luther King Jr. preached.

A Jan. 5 runoff between the race’s top two candidates — likely Warnock and either Loeffler or Collins — will be required if nobody wins more than 50% in November.

Loeffler also tested negative earlier this month and continued campaigning after coming into contact with President Donald Trump, who was treated for the virus.

She attended a news conference in the White House Rose Garden on Sept. 26 where Trump announced Barrett as his nominee to replace Ruth Bader Ginsburg. Photos of the event show Loeffler sitting in the audience in close proximity to other people and not wearing a mask. Several attendees of the event, including Trump, later tested positive for the virus.

Loeffler was also among Georgia lawmakers who greeted Trump as he exited Air Force One at Dobbins Air Reserve Base in Marietta on Sept. 25.