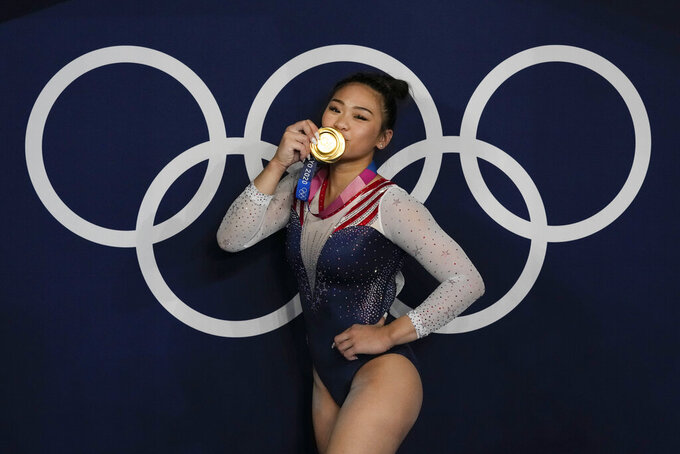 FILE - Sunisa Lee, of United States, reacts as she poses for a picture after winning the gold medal in the artistic gymnastics women's all-around final at the 2020 Summer Olympics, July 29, 2021, in Tokyo. The 2020 women's all-around gymnastics champion announced Tuesday, Nov. 15, 2022, that she will return to training at the elite level following the end of her sophomore season at Auburn next spring. (AP Photo/Gregory Bull, File)

AUBURN, Ala. (AP) — Sunisa Lee is going to make another run at Olympic glory.

The 2020 women's all-around gymnastics champion announced Tuesday that she will return to training at the elite level following the end of her sophomore season at Auburn next spring.

“I’ve been able to experience that once-in-a-lifetime feeling and the indescribable emotion when a gold medal is draped around your neck," Lee said in a social media post. "But I don’t want it to be just once in a lifetime,”

Lee, 19, became the fifth straight American woman to earn the Olympic title when she edged Rebeca Andrade of Brazil in a taut final at Ariake Gymnastics Centre, a victory Lee never envisioned until U.S. teammate and 2016 Olympic champion Simone Biles took herself out of the competition to focus on her mental health.

The victory made Lee, who is Hmong-American, an instant celebrity. It also, however, did not keep her from fulfilling her commitment to compete for Auburn. The Tigers are coached by Jeff Graba, the twin brother of Lee's personal coach, Jess Graba.

Lee became the first reigning Olympic champion to compete at the NCAA level, with attendance at meets spiking wherever she and the Tigers went. Lee is hoping to lead Auburn back to the NCAA championships after they finished fourth in the finals last spring.

Yet with the 2024 games less than two years away, the Minnesota native will return to training at the elite level next spring in hopes of being ready in time to make the five-woman U.S. Olympic team. An American team led by 2020 Olympians Jade Carey and Jordan Chiles won gold at the world championships earlier this month.

“I have my sights set on Paris in 2024 and I know what I have to do to get there,” Lee said. "I’m looking forward to rolling up my sleeves and putting in the work.”