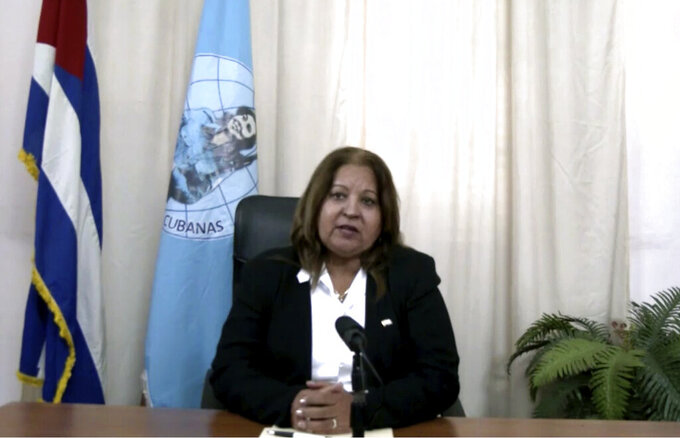 In this image made from UNTV video, Teresa Amarelle Boue, Member of the Council of State of Cuba, speaks during a pre-recorded message which was played inside the United Nations General Assembly Hall, Thursday, Oct. 1, 2020, at U.N. headquarters, in New York. (UNTV Via AP)

UNITED NATIONS (AP) — One by one, leaders and ministers from over 100 nations admitted Thursday that 25 years after the adoption of a road map to achieve equality for women not a single country has reached that goal — and many warned that instead of progress there is now push back. French President Emmanuel Macron put it bluntly, “women’s rights are under attack.”

Addressing a high-level meeting to commemorate the landmark 1995 U.N. women’s conference in Beijing, Macron said it’s no secret that the 150-page blueprint to realize gender equality approved by 189 nations in the Chinese capital “would have no chance of being adopted” in 2020.

So “this is no time for commemoration or self-congratulation,” he warned, because progress achieved by women “is being undermined, even in our democracies.”

The Beijing declaration and platform called for bold action in 12 areas for women and girls, including combating poverty and gender-based violence, ensuring all girls get an education and putting women at top levels of business and government, as well as at peacemaking tables. It also said, for the first time in a U.N. document, that women’s human rights include the right to control and decide “on matters relating to their sexuality, including their sexual and reproductive health, free of discrimination, coercion and violence.”

Macron said in his prerecorded speech that progress is being undercut “starting with the freedom for women to control their own bodies, and in particular the right to abortion.” And he cited continuing inequalities in schooling, pay, domestic work, and political representation.

In today’s more divided, conservative and still very male-dominated societies, he said, “we have seen around the world a pushback against gender equality and women’s rights.”

“Now is the time to push back against the pushback,” he declared.

Fiji’s Prime Minister Voreqe Bainimarama called it “a sad testament to the human condition” that the world is still struggling to achieve the right of women and girls to live free from violence, go to school, participate fully in decision-making affecting their lives and earn equal pay for work of equal value.

“The second-class status of women is deeply engrained in many societies, and it takes time and effort to root it out,” he said.

The head of the U.N. agency charged with promoting gender equality said there has been progress, but not enough and too slow.

But she also stressed significant “push back” on reproductive rights and other issues in developed countries, including the United States, and in the European Union. In Africa and Asia, she said, there are governments “that have not felt any pressure” to move forward on gender equality.

When the United Nations was founded in 1945 on the ashes of World War II, Mlambo-Ngcuka said, not a single woman was a head of state or government. At the time of the Beijing conference in 1995, there were 12 female leaders, and today there are 22 women leaders among the 193 U.N. member nations.

“Women are now calling for a leapfrog to 50 percent representation, or parity in all spheres, including Cabinets, corporate boards, and throughout the economy, including women as beneficiaries of COVID-19 fiscal stimulus packages, engagement in all peace processes, and closing the digital divide,” Mlambo-Ngcuka said.

Secretary-General Guterres said the coronavirus pandemic has hit women and girls the hardest and warned: “Unless we act now, COVID-19 could wipe out a generation of fragile progress towards gender equality.”

Sigrid Kaag, the Netherlands’ overseas trade minister, said the disproportionate impact of the pandemic on women and girls “adds on to an already growing push back against women’s rights and girls’ rights, and gender equality around the world.”

“There is more gender-based violence,” she said. “More women and girls losing their livelihoods, and more girls are sadly not returning to school.”

In her prerecorded speech, German Chancellor Angela Merkel spoke about being in that small group of women world leaders today and recalled Britain's first female prime minister, Margaret Thatcher, saying 26 years ago when she was a minister of education and science that “No woman in my time will be prime minister.”

Looking back at the Beijing conference, Merkel said its platform and declaration remain “an important cornerstone for the implementation of women’s rights around the world” — and 25 years after their adoption “equality should be a given.”

“But we still have a long way to go,” she said, stressing that equality is a question that women and men can only resolve together, and only “if society, business and governments pull in the same direction.”

“Get on board!” Merkel urged. “Let’s work together to really target the Beijing goals! The faster the better.”

The landmark Fourth World Conference on Women in Beijing was the largest-ever formal gathering of women, though hundreds of men were among the 17,000 participants at the official meeting that adopted the roadmap to gender equality. Some 30,000 people, the vast majority women, attended a parallel NGO forum outside the capital.

Iran’s Vice President for Women and Family Affairs Masoumeh Ebtekar told the virtual meeting that she was the head of her country’s delegation at Beijing and witnessed how women from all nations tried to improve the platform for action.

“We have not achieved on many of those areas and have retreated in some like war, poverty and disease,” she said. “The struggle against inequality and racism is ongoing and has emerged as a major issue in the Western Hemisphere.”

China’s President Xi Jinping called for redoubled efforts “to promote gender equality and advance the global cause of women’s development.” He said China will donate another $10 million to UN Women in the next five years, and he proposed that world leaders hold another meeting on gender equality and the empowerment of women in 2025.

At Thursday’s meeting, there were 167 scheduled speakers, each expected to give a three-minute address. But General Assembly President Volkan Bozkir said many prerecorded speeches, because of the pandemic, were longer. The result was that only 115 nations got to speak before the meeting ended.

Bozkir said there would not be another day for speeches, but the U.N. would post those that weren’t heard.

Among the countries unable to give their speeches were the United States, Japan, Mexico, United Kingdom, Russia, Lebanon, Libya, Syria and Afghanistan.

The United States was a key player in drafting the Beijing declaration and platform, but as late as Thursday morning the U.N. speakers list had no name for the speaker from the Trump administration. By mid-morning, Education Secretary Betsy DeVos was added, at number 138, and her video address was posted on YouTube.

DeVos praised the “incredible gains” for American women since the Beijing conference and denounced “evil regimes” elsewhere that deny women’s rights and freedoms, singling out Venezuela, Cuba, Iran and “the worst violator of all,” China.

She accused the Chinese Communist Party of killing “millions of baby girls” since 1995 and attacking Uighurs and other minorities, forcing women to have forced sterilizations and abortions, and urged the United Nations “to stop ignoring and enabling these attacks.”

Edith M. Lederer, chief U.N. correspondent for The Associated Press, has been reporting internationally for nearly a half century, including at the Beijing Women’s Conference in 1995. Follow her on Twitter at http://twitter.com/EdithLedererAP