25 years on: A look at Europe's only post-WWII genocide 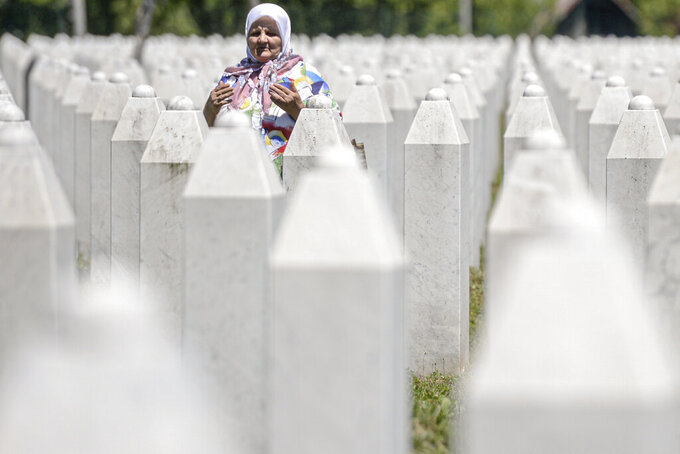 A woman prays at the memorial cemetery in Potocari, near Srebrenica, Bosnia, Friday, July 10, 2020. Nine newly found and identified men and boys will be laid to rest when Bosnians commemorate on Saturday 25 years since more than 8,000 Bosnian Muslims perished in 10 days of slaughter, after Srebrenica was overrun by Bosnian Serb forces during the closing months of the country's 1992-95 fratricidal war, in Europe's worst post-WWII massacre. (AP Photo/Kemal Softic)

SREBRENICA, Bosnia-Herzegovina (AP) — Bosnia on Saturday marks the 25th anniversary of the Srebrenica massacre, the country's worst carnage during the 1992-95 war and the only crime in Europe since World War II that has been declared a genocide.

The brutal execution of more than 8,000 Bosniak Muslim men and boys by Bosnian Serb troops is being commemorated in a series of events and the reburial of some of the victims' remains at a memorial site near the town.

Normally, thousands attend the ceremonies at Potocari, but the global pandemic has made it impossible this year — U.N. Secretary General Antonio Guterres will speak via a video message and many other foreign guests won't come.

Here is a look at what happened in Srebrenica:

Srebrenica is a small town in eastern Bosnia, tucked among green hills that surround the town on all sides. Before the war started, Srebrenica was an industrial hub with about 7,000 people in the town itself and thousands more scattered in the wider area.

Srebrenica's pre-war population was ethnically mixed, including both Bosniaks, who are mostly Muslim, and ethnic Serbs. The two ethnic groups lived peacefully during the era of Communist-run Yugoslavia. But this changed after the breakup of the federation.

WHAT HAPPENED IN SREBRENICA DURING THE WAR?

When ethnic clashes first broke out in 1992, the territory grab started and Bosnian Serb forces took hold of about two-thirds of Bosnia with the aim of creating a mini-state and uniting with neighboring Serbia.

With Bosnian Serb troops taking control over eastern Bosnia — which borders Serbia — thousands of Bosniak Muslim refugees streamed into Srebrenica. The town came under Bosnian Serb siege, prompting the U.N. in 1993 to declare the area a “safe haven" under protection of the world body.

SREBRENICA AS A UN SAFE HAVEN

The U.N. peacekeepers were stationed in Srebrenica, and a cat and mouse game with the Serbs to get in supplies and help the population under siege continued. Reports about desperate people packed in the town without basic facilities shocked the world.

Sporadic clashes persisted throughout the war. Srebrenica had a small group of Bosniak Muslim soldiers, the so-called “defenders," whom Bosnian Serbs blame in the killings of hundreds of people and looting of Serb-populated villages in the area.

THE FALL OF SREBRENICA AND THE MASSACRE:

In July 1995, the Bosnian Serb army under the command of notorious Gen. Ratko Mladic attacked Srebrenica. The shelling started first and soon enough the troops moved in, swiftly overtaking the town whose Dutch U.N. peacekeepers stood no chance.

The Serbs then separated the men and boys from the women, with Mladic promising nothing would happen to anyone and handing out candies to the children. Within the next 10 days, however, Bosnian Serb troops killed the male prisoners and hunted down many of those who tried to escape through the surrounding hills.

Soon, chilling reports of brutal executions started to emerge. In an attempt to hide the massacre, the Bosnian Serbs buried the bodies in mass graves, only to dig them out and move later. The victims were executed by firearms, their throats were slashed or they were locked in a warehouse, their hands often tied behind their backs, and explosives set off.

HAS ANYONE BEEN PUNISHED?

The U.N. war crimes tribunal for the former Yugoslavia has convicted and sentenced Mladic and the Bosnian Serb wartime political leader Radovan Karadzic of the Srebrenica genocide, along with other top Bosnian Serb officials, officers and policemen. Mladic and Karadzic are both serving life in prison.

Bosnian Serbs, however, still largely deny the scope of the killings and refuse to acknowledge they amounted to a genocide. When the war ended in a U.S.-brokered peace deal in 1995, a Serb-run entity was formed within Bosnia, of which Srebrenica became part.

FINDING AND IDENTIFYING THE VICTIMS

For many relatives of the victims, the agony continues as forensic experts still haven't dug out and completed work on all the remains. The bodies were scattered in a number of mass graves and locating them and confirming the identity of the victims takes years.

The International Commission on Missing Persons in 1996 helped set up — at the urging of then-U.S. President Bill Clinton — a DNA-based system to find and identify the remains of the Srebrenica victims, and the other missing as well.

On Saturday, nine Bosnian men and boys will be laid to rest, 25 years after they were killed. July 11 is marked as the remembrance day for the victims of the genocide — the youngest one was a newborn baby while the oldest is believed to have been 94.