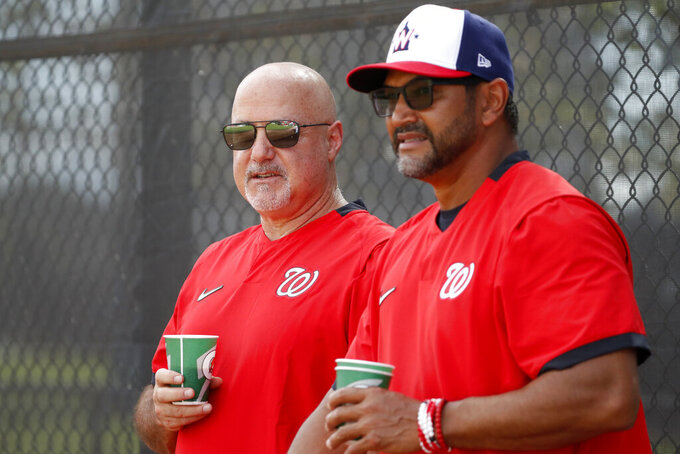 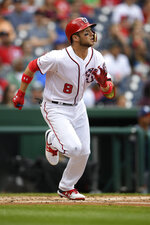 WASHINGTON (AP) — For all of the opt-outs and rule-change oddities, the spring training interruption and social distancing, Washington Nationals manager Dave Martinez figures his team’s bid for a rare repeat World Series championship during this pandemic-affected season might very well come down to what gave the franchise its first title a year ago.

That, of course, would be the quartet of starting pitchers he refers to as the “four horses”: Max Scherzer, who is slated to throw in Washington’s opener against the visiting New York Yankees on July 23; followed by Stephen Strasburg, who re-signed for $245 million over seven years; Patrick Corbin and Aníbal Sánchez.

“We’re getting those guys ready and they look good. I mean, they look really good,” said Martinez, who preached to his players that they should strive to “go 1-0 today” and “stay in the fight” after getting off to a 19-31 start in 2019. “We played so long last year, that maybe the time off did help them, and they got to regroup and stuff. We didn’t want this much time off, but it might be good.”

Scherzer is a three-time Cy Young Award winner and started the Game 7 victory over the Houston Astros last October. Strasburg earned World Series MVP honors and became the first pitcher to end a postseason with a 5-0 record.

Corbin, the lone lefty, proved to be worth every bit of his $140 million, six-year free-agent deal, starting and relieving during the title run. The personal turnaround Sánchez, the man of a million pitches, engineered after an 0-6 beginning to his first year in Washington mirrored his team’s about-face.

“It’s going to be interesting just to see kind of how we start off,” Strasburg said, “because there’s really no time to just make an adjustment.”

Here are other things to know about the 2020 Nationals as they head into the 60-game regular season:

Carter Kieboom will get a shot at being the everyday third baseman, four years after he was a first-round pick in the amateur draft. It’s a jump for a guy who is learning to field that position and went 5 for 39 in 11 games last season for the Nationals as a fill-in shortstop.

“I’ll be honest with you: The first thing that ran through my head was, ‘Let’s keep the job.’ It’s one thing to get one, but it’s another thing to keep it and progress that way,” Kieboom said about learning that Martinez was giving him the starting spot. “So that’s kind of where my head’s at right now.”

The team’s biggest loss in free agency came at Kieboom’s new position, third base: Anthony Rendon, who produced 34 homers and a majors-best 126 RBIs before signing for $245 million with the Los Angeles Angels. Two guys who helped mold the clubhouse camaraderie are also gone: Gerardo Parra, he of “Baby Shark” fame, and Brian Dozier, he of shirtless “Calma” dance fame. A bullpen that was the worst in the majors for much of the regular season got a boost from the addition of righty Will Harris, while the already versatile and deep crop of infielders was joined by Eric Thames and Starlin Castro, who both could be in the DH mix with holdover Howie Kendrick.

Veteran infielder Ryan Zimmerman was among the first major leaguers to opt out of the season, citing concerns about the health of his mother and his newborn son. Backup catcher Wellington Castillo and pitcher Joe Ross also will sit out. Ross’ absence leaves Erick Fedde and Austin Voth to compete for the fifth starter’s spot, a duo Martinez called “two guys that can really fill the void.”

Eight players weren't at the start of “summer camp,” including Kendrick, superstar-in-the-making Juan Soto and starting outfielder Victor Robles. “You’re talking about three guys that are big pieces to our lineup,” Martinez said. “We need ’em.” The Nationals did not say why that trio was missing. But GM Mike Rizzo did say two unidentified players tested positive for COVID-19, and others who came into contact with them were kept away from the rest of the team, too. Two relievers, Wander Suero and Roenis Elías, went on the injured list 10 days before opening day, with no reason given.

Neither Martinez nor Rizzo is assured of a contract beyond 2020. The Nationals hold a club option for 2021 for Martinez; Rizzo’s deal expires at the end of this season.