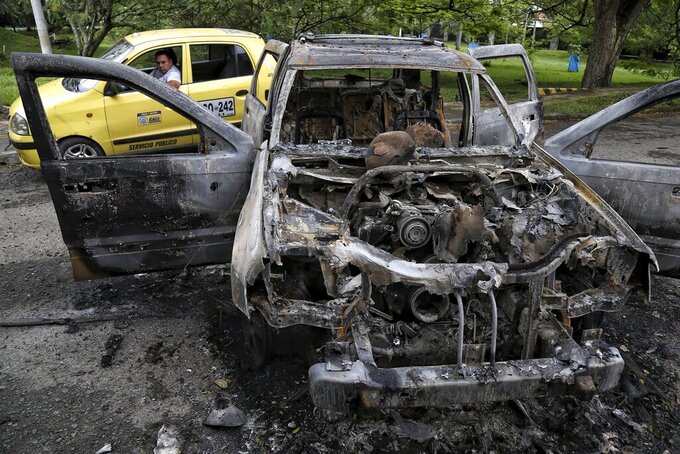 A taxi drives past the charred remains of a car that was burned during clashes between Indigenous people from Cauca state who arrived to support the national strike, with local residents who do not support the blocking of roads in Cali, Colombia, Monday, May 10, 2021. Colombians have protested across the country against a government they feel has long ignored their needs, allowed corruption to run rampant and is so out of touch that it proposed tax increases during the coronavirus pandemic. (AP Photo/Andres Gonzalez)

The new figures from the ombudsman are similar to those recorded by Temblores, a non-governmental group that tracks police violence. Temblores said Tuesday that 40 people had been killed during the protests in incidents related to police violence while one policeman was stabbed to death while trying to stop a riot.

Colombian police have been widely accused of using excessive force to break up demonstrations and riots that started April 28 after the government attempted to increase taxes in what it said was an effort to reduce its deficit and raise funds for health care and social services.

The government withdrew its $6.7 billion tax plan May 2 and the finance minister resigned the following day, but protests have continued across the country. Demonstrators are now pressing demands that include reforming the police, implementing a basic income plan for 10 million people and providing free tuition at public universities.

Colombia’s economy contracted 7% last year and millions of people were left without work by restrictions related to the pandemic. That increased frustration with the government, which had failed to meet demands made during a previous wave of protests in 2019.

On Monday night, the government’s peace commissioner, Miguel Ceballos, said President Ivan Duque’s administration was willing to sit down with protest leaders to negotiate on some of their demands. Ceballos asked the United Nations and the Roman Catholic Church to mediate the talks.

The protest leaders met with government officials earlier Monday and said that basic conditions for negotiations, such as security guarantees for protesters, had not been met. Protest leaders are expected to respond to the government’s new offer later this week.

The protests are being staged as coronavirus infections reach record levels in Colombia, where more than 78,000 people have died from COVID-19, the disease that can be caused by the virus. Over the past week Colombia has averaged more than 15,000 new infections a day. The current rate of infections is five times greater than at the beginning of March.