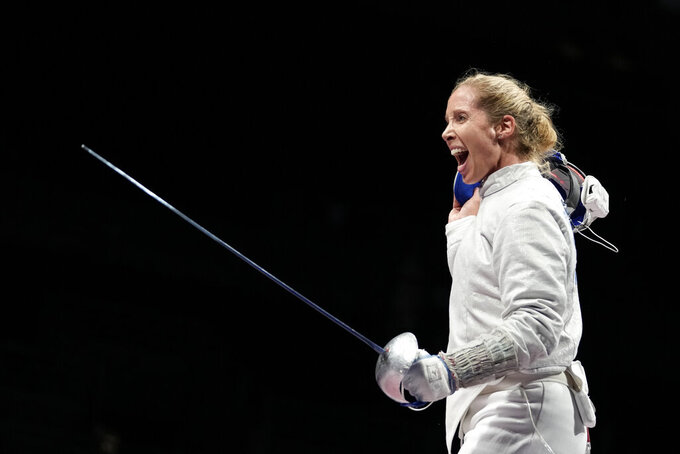 Mariel Zagunis of the United States celebrates after defeating Kim Jiyeon of South Korea in the women's individual round of 16 Sabre competition at the 2020 Summer Olympics, Monday, July 26, 2021, in Chiba, Japan. (AP Photo/Andrew Medichini)

CHIBA, Japan (AP) — Mariel Zagunis, the first American woman to win an Olympic gold medal in fencing, was eliminated in the quarterfinals of the saber event on Monday at the Tokyo Games.

The 2004 and 2008 champion is competing at her fifth Olympics. She's already looking ahead to another medal shot in the team event, and maybe even a sixth trip for the 2024 Paris Games.

"It was over too soon because I feel like I have more in the tank and I’ve just put in so much work,” she said.

Zagunis said it was fitting that her quarterfinal bout was against one of her oldest rivals. Russian fencer Sofya Velikaya, the 2016 Olympic runner-up, ended Zagunis' bid for a third individual saber title 15-8 after scoring seven unanswered points after it was tied 8-8. They have competed many times before, including in the 2011 world championship final, but hadn't met in competition in several years. The bout was typical saber fencing, a mix of lightning reactions and smart strategy.

Zagunis said she had an “unspoken understanding of why we're here” with Velikaya since both are mothers competing among the world's best.

"I’m just really proud to be here and show that it can be done," Zagunis said as Velikaya went on to win a third consecutive silver medal in the individual saber.

Over the past five years, much has changed in Zagunis' life. For one thing, she's no longer the only American woman with an Olympic fencing gold. Lee Kiefer's win in foil on Sunday changed that.

Zagunis suffered a severe foot injury in late 2016, became a mother in October 2017 and then had to deal with the coronavirus pandemic. Zagunis made sure of qualifying for Tokyo in March 2020, just before the virus shut down sports around the world. She found it difficult to deal with a year of uncertainty about whether the Games would go ahead.

An extra year of training “makes your brain want to explode," she said.

The pandemic also means there are now only three years until the Paris Olympics.

“I’m not ruling out Paris, especially knowing what I’ve been through the past five years," she said. "To feel the way I did out there today really gives me good confidence going forward.”