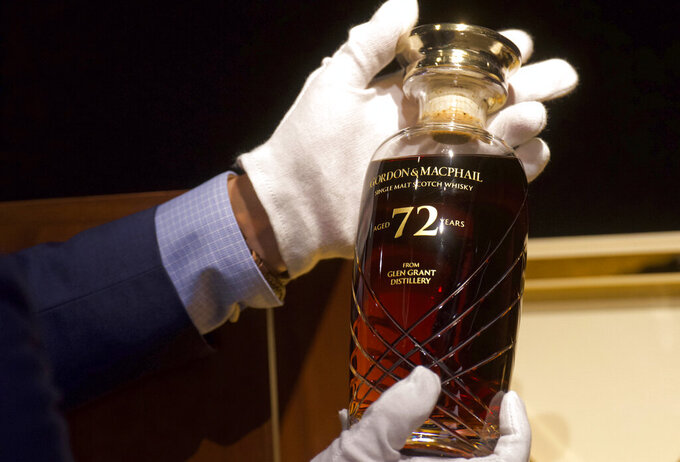 Expecting to fetch up to US$49,000 at auction, a 72-year-old bottle of Glen Grant single malt whisky from Scotland is displayed at a Bonhams auction preview in Hong Kong, Thursday, Jan. 28, 2021. Despite the economic uncertainty brought on by the pandemic, interest in the rare whisky remains high. Compared to other investment commodities, collectable whisky is doing strong in the past 10 years, with a four-fold increase in its price, Bonhams specialist Christopher Pong said. (AP Photo/Vincent Yu) 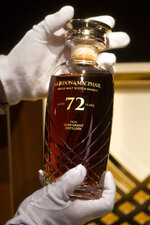 HONG KONG (AP) — A 72-year-old bottle of Glen Grant single malt whisky from Scotland fetched more than $54,000 in an auction in Hong Kong on Friday.

It is the first time that the 1948 Glen Grant whisky, by independent bottler Gordon & MacPhail, was offered in an auction. It is number 88 of 290 decanters bottled by the company and was auctioned off by Bonhams, fetching a price of 421,600 Hong Kong dollars ($54,300) including premium.

The whisky, the oldest from the Glen Grant distillery, is in a Dartington crystal decanter with an American black walnut presentation box.

Despite the economic uncertainty brought by the pandemic, interest in rare whiskies remains high. Compared to other investment commodities, collectable whisky has done well in the past 10 years with a four-fold increase in prices, said Christopher Pong, wine and whisky specialist at Bonhams.

Other whiskies featured in Friday’s auction included a 35-year-old Hibiki whisky from Japan in a Kutani ceramic decanter that sold for 372,000 Hong Kong dollars ($48,000).