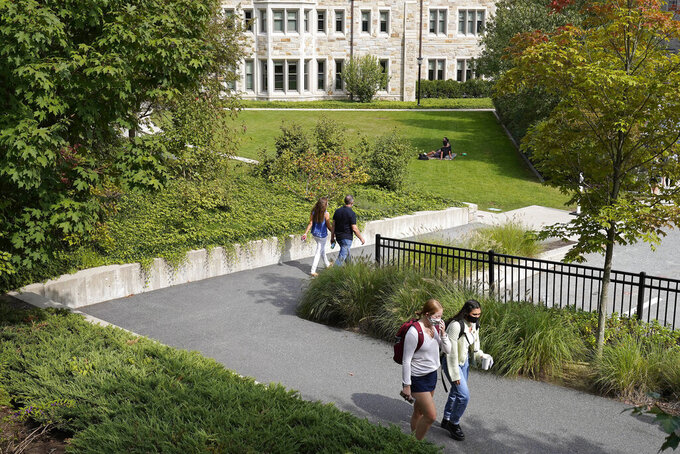 College students wear masks our of concern for the coronavirus on the Boston College campus, Thursday, Sept. 17, 2020, in Boston. (AP Photo/Steven Senne)

BOSTON (AP) — A look at developments related to the coronavirus in New England on Saturday.

An eighth death has been linked to a coronavirus outbreak stemming from a wedding and reception in the northern part of Maine.

The man who died was in his 80s and from Somerset County, the Maine Center for Disease Control and Prevention said Saturday.

The wedding and reception in the Millinocket area on Aug. 7 is linked to more than 170 cases of COVID-19, including in an outbreak at a nursing home in Madison and a jail.

The Maine CDC said Saturday that the number of deaths related to an outbreak at the Maplecrest Rehabilitation and Living Center in Madison is now seven.

In other developments, the number of coronavirus cases at a Rumford paper mill has increased to 18, the company said Friday.

ND Paper mill has said it was testing the more than 600 workers.

In March, the company said it implemented stringent requirements for employees and added a mask mandate in May, WMTW-TV reported.

The head of the union that represents the workers has urged all community members to follow protocols to limit the spread of the virus.

“You’re killing us. You’re putting me and everybody else out of work. Not just in the mill but in the community, and people are gonna die,” Gary Hemingway said. “It’s not funny. You don’t want to wear a mask, you’re the idiot, but you’re hurting us.”

Ortiz said Friday that he was asymptomatic, but that his brother who was also infected had to spend a week in the hospital and lost 25 pounds (11 kilograms). Ortiz was speaking during the NESN broadcast of the Red Sox game against the New York Yankees on Friday.

“This is no joke,” Ortiz said. “You don’t realize how crazy this is until it hits home. And I learned so much about this COVID-19 thing while I was going through the process. It’s an experience to be honest with you.”

City officials are thanking the Providence College administration for taking quick action after a surge of about 120 new coronavirus cases among students.

Rev. Kenneth Sicard, the school's president, announced Friday that the private Roman Catholic college was moving to remote-only learning for at least two weeks. Students who live off campus cannot leave their apartments, and students who live on campus are not allowed to leave campus, with gatherings of any kind are banned, he said.

The college has been in constant contact with the Health Department and city of Providence since the incident started, said Providence Mayor Jorge Elorza and Providence City Council majority leader Jo-Ann Ryan.

“We all have a role to play in keeping our community safe, including the student population that live in close quarters,” they said in a written statement. “That’s why it is so important for our student population to adhere to social distancing mandates and the number of people that can gather at any one time. To not only keep themselves safe, but the residents that live around and work on the campus.”

The House of Representatives has been meeting at the university’s Whittemore Center so legislators can follow COVID-19 guidelines for social distancing.

Speaker Steve Shurtleff said he learned that some representatives were drinking beer in the hall after the Wednesday's meeting and others were outside the center without wearing marks, which violates the ordinances of the town and school, WMUR-TV reported.

CONNECTICUT The University of Connecticut on Saturday placed a second dormitory under medical quarantine after several students tested positive for the coronavirus.

UConn officials notified all 96 residents of the Willard C. Eddy residence hall that they were being placed under medical quarantine as of 4 p.m. Saturday because four students living in the dorm tested positive for the virus over the past week.

UConn officials said 28 students living in Eddy were already in quarantine or isolation.

Nearly 150 UConn students living on the main campus have tested positive for the virus since returning to Storrs last month.

Vermont reported two new cases of the coronavirus on Saturday for a statewide total to date of 1,710 since the pandemic began. Two people were currently in the hospital with COVID-19, the Health Department said. The total number of deaths remained at 58.