About half fully vaccinated in MA; NH gets ready for beach 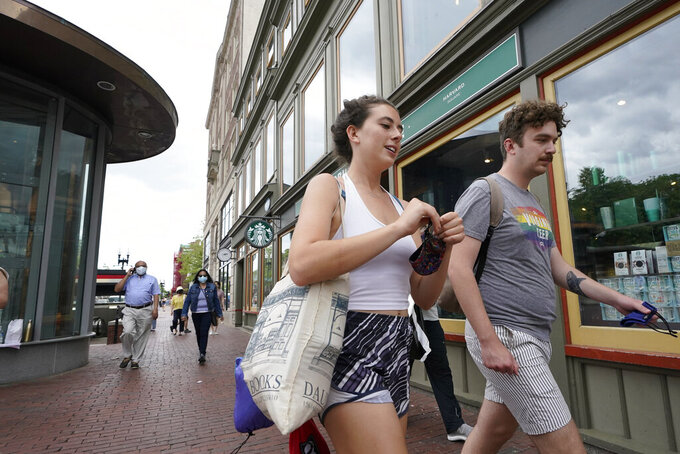 Pedestrians, some wearing masks out of concern for the coronavirus, left, while others, right, go without masks, while walking in the Harvard Square neighborhood, of Cambridge, Mass., Sunday, May 23, 2021. Massachusetts officials say the number of people fully vaccinated against coronavirus in the state is approaching 50%. (AP Photo/Steven Senne)

The number of people fully vaccinated against COVID-19 in Massachusetts is approaching 50%, state officials said.

The Massachusetts Department of Public Health said Sunday that nearly 3.5 million people in the state are fully vaccinated. Massachusetts has about 7 million residents.

The public health department tweeted on Saturday that it will continue to promote coronavirus vaccines in the state, as many residents still need to get a second shot.

“Be sure to get both,” the agency tweeted.

A Walgreens in Maine accidentally gave deactivated doses of COVID-19 vaccines to the public, the Maine Center for Disease Control and Prevention has said.

The vaccines are usually diluted with saline solution before they are injected into a patient, but workers at the Sanford location of the pharmacy chain accidentally used sterile water, the Portland Press Herald reported. That renders the dose ineffective.

Walgreens said the customers who received the deactivated doses are being contacted to return for an active dose.

Maine CDC said there was no immediate public health risk from the mistake, which was reported to state authorities.

New Hampshire residents are feeling more comfortable with activities like eating inside a restaurant, going to a state beach, and getting their hair cut, according to a Granite State Poll conducted by the University of New Hampshire Survey Center.

About half of those polled said they are currently comfortable with attending a wedding with 50 or more people, going to a bar or pub, going to a gym or health club, and going to a movie theater, according to the survey published Wednesday.

Even though New Hampshire no longer has a statewide mask mandate and the Centers for Disease Control and Prevention announced that fully vaccinated individuals no longer need to wear masks in most situations, people responding to the survey said they are wearing masks at only slightly lower rates than in December. The survey said 83% said they always wear a mask while shopping at a grocery store or pharmacy, down from 89% in December, while only 10% said they rarely or never do this. A total of 69% said they wear a mask when getting restaurant takeout food, down from 75% in December.

Relatively few people continue to wear a mask when socializing with family or friends they don’t live with or while exercising outdoors.

Also nearly 75% surveyed said they are at least partially vaccinated against COVID-19. Seventeen percent said they will probably not or almost certainly not be vaccinated, unchanged since April.

The survey center said 1,824 people completed the survey online between May 13 and May 17. The margin of sampling error for the survey was plus or minus 2.3 percentage points.

Vermont Amtrak service will start running again on July 19 after being suspended for more than a year because of the coronavirus pandemic.

Tickets are currently available for the Vermonter and the Ethan Allen Express state-supported train service, officials said, according to WCAX-TV.

“The trains will be running on the same schedules that were in place when the state suspended service on March 26, 2020,” Transportation Secretary Joe Flynn said in a statement this past week. “We appreciate the patience of all of our customers, including the many Vermonters who relied on these trains for transportation when the pandemic struck.”

The train service was suspended last March after the the governor issued a state of emergency.

The Vermonter runs between Washington D.C. and St. Albans and the Ethan Allen Express runs between New York City and Rutland.

The average number of daily COVID-19 deaths in Rhode Island has fallen to less than one.

The AP is using data collected by Johns Hopkins University Center for Systems Science and Engineering to measure outbreak caseloads and deaths across the United States.

Elsewhere in southern New England, the average number of daily new coronavirus cases in Connecticut is less than half what it was two weeks ago.