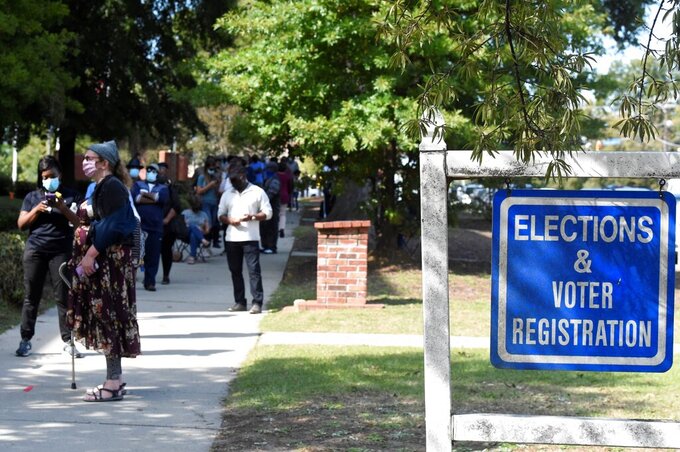 Voters wait in line outside the Richland County election office on the first day of in-person absentee voting in South Carolina on Monday, Oct. 5, 2020, in Columbia, S.C. A number of counties have polling places where people can vote almost like they would in person on Election Day, instead of having to mail in their absentee ballot. (AP Photo/Meg Kinnard)

COLUMBIA, S.C. (AP) — Nearly 20,000 votes have already been cast in November's general election in South Carolina as the first voters on Monday got to make their choice in person.

A number of counties opened polling places where people can vote almost like they would in person on Election Day, instead of having to mail in their absentee ballot.

Lines formed in Greenville, Columbia, Charleston, Spartanburg, Rock Hill and other places Monday. Some people waited as long as two hours, but waits of about an hour were more common.

Most of South Carolina's largest counties plan to open additional places to cast in-person absentee ballots either later this week or next week. The offices are typically open from 8 a.m. to 5 p.m. weekdays and some will be open Saturday mornings in the last few weeks before Election Day.

Pastor Adeira Black waited about two hours to vote Monday in Richland County. He spends a lot of time out of town and wanted to make sure he got his ballot in.

Black voted on election day in the June statewide primaries. First he found his Columbia polling place closed. Then he waited 3 1/2 hours to vote in an election where experts think turnout was only a third of the more than 2 million people expected to vote in the general election.

“I didn’t want to run into that again,” Black said.

More than 18,000 ballots have already been cast in the election in South Carolina, according to the state Election Commission. About 3,500 of them are from military members and their families stationed overseas.

As of Monday morning, the commission had already issued more than 215,000 absentee ballots.

Absentee voting is open to everyone after South Carolina lawmakers citing the COVID-19 pandemic removed the requirement that voters have an excuse to vote absentee such as being over 65 or being out of town on Election Day.

Election workers are also bracing for a number of absentee ballots by mail. A federal judge has ruled mailed-in absentee ballots don't need a witness signature, but that ruling is being appealed to the U.S. Supreme Court.

The president, a U.S. Senate seat and races in all seven U.S. House districts in South Carolina are all on the ballot.