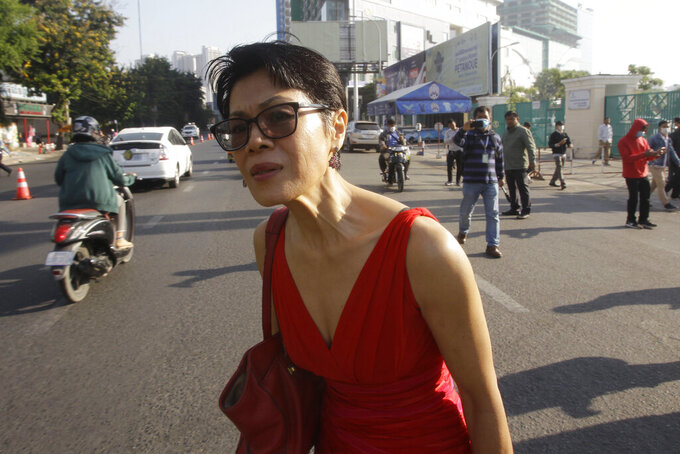 Theary Seng, a Cambodian-American lawyer, stands near the Phnom Penh Municipal Court in Phnom Penh, Cambodia, Thursday, Jan. 14, 2021. Theary Seng said Thursday she was being persecuted for her political opinion as she and dozens of other government critics charged with treason and other offenses returned to court in a trial criticized by rights advocates. (AP Photo/Heng Sinith)

More than 60 defendants were summoned, mostly former members or supporters of the Cambodia National Rescue Party, which had been the sole credible political opposition until Cambodia’s highest court in late 2017 ordered its dissolution. But only 10 defendants attended, according to defense lawyer Sam Sokong.

The reasons for the absences were not immediately explained, though some defendants reside abroad. Under Cambodian law, defendants can be tried in absentia.

The court announced that because of the courtroom's limited capacity and coronavirus precautions, only the defendants, their lawyers, and representatives of some civil society organizations and several foreign embassies would be allowed inside.

Many of the defendants are accused of being involved with a failed effort by former opposition leader Sam Rainsy to return from exile in November 2019 to challenge the country's longtime ruler, Prime Minister Hun Sen.

Other exiled activists have announced they also will try to return this Sunday, although their plans are again opposed by Hun Sen's government, which has launched a sweeping crackdown on its opponents.

Theary Seng, a Cambodian-American lawyer who has long been one of the most outspoken critics of Hun Sen, told reporters at the court that she was not afraid of his regime and would not be intimidated.

Describing the charges as baseless, and the proceedings as “a sham trial,” she said “the decision will be made by politicians, not judges.”

“I’m being persecuted for my political opinion, for expressing my opinion,” she said.

Hun Sen has been in power for more than three decades and tolerates little opposition. An adroit political operator, he has employed both guile and force to maintain his position in an ostensibly democratic state.

“These mass trials are an affront to international fair trial standards, Cambodia’s human rights commitments and the rule of law,” the group’s Asia-Pacific regional director, Yamini Mishra, said in a statement. “This onslaught of cases is the culmination of a relentless campaign of persecution against Cambodia’s political opposition and other dissenting voices.”

Virtually all of the defendants have been charged with conspiracy to commit treason and incitement to commit a felony, which together carry a maximum penalty of 12 years in prison.

An initial hearing by the Phnom Penh Municipal Court in the cases of about 130 defendants was held in November, when the judge agreed to split the defendants into two groups to make the proceedings easier and allow those who did not yet have lawyers to find representation. The hearings for the second batch are slated to begin March 4.

Thursday's session was adjourned after the judge questioned two defendants and announced the hearing would continue on Jan. 28. There is no estimate of when the trial might conclude.

Several Western nations have imposed sanctions on Hun Sen's government, mainly after concluding that elections in 2008 without the opposition were neither free nor fair. The harshest measure came from the European Union, which last year withdrew some preferential trading privileges.

The U.S. Embassy in Phnom Penh said on its Facebook page that it had observers at the court Thursday. “We have serious concerns about the lack of due process and urge Cambodian authorities to preserve the constitutional right to peaceful expression,” it said.

This story corrects the number of defendants appearing in court to 10 based on new information from lawyer.