After a forgettable season, Warriors ready to move forward 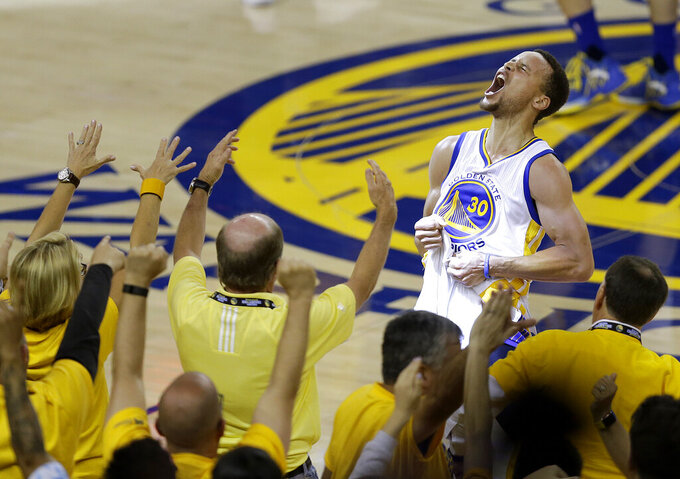 FILE - In this May 30, 2016, file photo, fans cheer as Golden State Warriors guard Stephen Curry yells after the Warriors beat the Oklahoma City Thunder in Game 7 of the NBA basketball Western Conference finals in Oakland, Calif. The roar of the crowd has been a staple of major sports and an advantage for the home team. Playing in empty buildings would require a significant recalibration. (AP Photo/Ben Margot, File)

The Warriors had the worst record in the NBA at 15-50 with a roster of largely unknowns taking the court night after night.

Andrew Wiggins arrived and never got to showcase his star talent alongside the team's top rotation before pro sports were halted because of the coronavirus pandemic.

Steve Kerr's coaching got tested like never before as he relied on rookies and young players to learn on the fly because that's all Golden State had available.

Then the Warriors were one of the teams left out when the NBA’s Board of Governors approved a 22-team format for restarting the league season next month.

“We all recognize that there are much more important and pressing issues in our world right now that need to be addressed and corrected," general manager Bob Myers said in a statement.

“Basketball is secondary at this point. Nonetheless, it is helpful to have a definitive resolution to our season. We can now focus our efforts on preparing for the 2020-21 season and, ideally, putting ourselves in position to be a very successful team. In many respects, despite our won-loss record, we had a productive season this year.”

Here are some things to take away from Golden State's forgettable season, which snapped seven straight playoff appearances:

Curry, Kerr, Thompson and the rest of the Warriors realize there's a core in place to take this group back to the top. Even perennial winners have a down year at some point, after all.

"This is an amazing opportunity the way I see it in terms of moving into another championship window that we are extremely capable of doing," Curry said. “This year has been tough, so many injuries, so many new faces.”

The two-time NBA MVP missed 58 games after falling on his left hand Oct. 30 against Phoenix. He returned at last on March 5 to face the Raptors only to contract the flu and sit out again before the season was stopped.

Curry knew he wouldn't be fully healthy the rest of the way, but now he has the time he needs to recover. And so do teammates like Thompson and Draymond Green.

In February, the faces everyone had just begun to get to know were gone just like that.

Golden State dealt D’Angelo Russell, Jacob Evans III and Omari Spellman to the Minnesota Timberwolves ahead of the trade deadline for Wiggins and draft picks

"That’s unprecedented,” Myers said at the time, while noting the moves provided financial flexibility to plan for the future.

“As painful as it was to move some of these guys and do that, the thinking was that going into 2020 summer it provided some flexibility and maneuverability with our payroll,” he said.

The Warriors lost 10 straight during one especially ugly stretch. They went just 8-26 at home and had a hard time getting through the close games, dropping all five overtime contests they played.

The frustration mounted and even Kerr begged for a victory just to keep morale up in the locker room.

“We understand where we are record-wise, but we still have a standard that we have to play to,” Kerr said.

He was forced to use 33 different starting lineups, most since a franchise record-high 49 in 2009-10 — and the sixth-highest total used in a single season.

Out of necessity to keep a lineup on the floor, fans got to know young players they likely wouldn't have seen so soon: Seven rookies played for Golden State and together they averaged 29.1 points.

From Ky Bowman and Eric Paschall to Jordan Poole and Alen Smailagić, they all had to play significant roles. Not since the Philadelphia Warriors of 1952-53 played eight rookies had the franchise used so many first-year players.

Golden State will get a top-five draft pick.

“We've got Klay coming back, we've got Draymond doing his thing, we've got Andrew Wiggins, we've got a lot of the young guys that are going to be a part of our team going forward," Curry said.