After medals, Humphries, Meyers Taylor back on Olympic ice 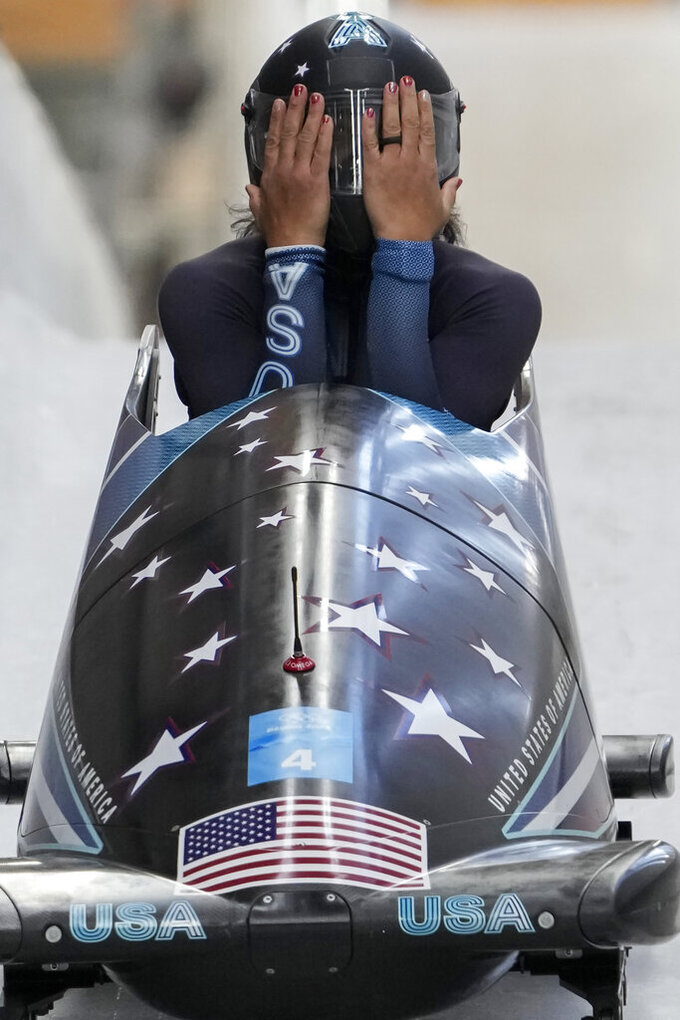 Elana Meyers Taylor, of the United States, reacts after the finish during the women's monobob heat 4 at the 2022 Winter Olympics, Monday, Feb. 14, 2022, in the Yanqing district of Beijing. (AP Photo/Pavel Golovkin)

BEIJING (AP) — The Olympic routine for Kaillie Humphries and Elana Meyers Taylor has always been the same. They would arrive, train, compete, win a medal and go home.

The celebration after the monobob competition was short-lived for Humphries and Meyers Taylor. Barely 24 hours after they won their fourth Olympic medals — gold for Humphries, silver for Meyers Taylor — they were back at work at the Yanqing Sliding Center, with Tuesday being the first day of official training for the traditional two-woman competition that begins Friday.

And their answers, in separate post-training interviews Tuesday, were eerily similar.

Ah, but neither minded being tired, either.

The Beijing Games are the first in Olympic history with two medal events for women’s bobsledders, something that Humphries and Meyers Taylor began seriously pushing for when they took it upon themselves to start competing in four-man events eight years ago. In 2018, the International Olympic Committee said the second bobsled event for women would be added to the program starting this year — but went with monobob, with just a driver in the sled, instead of the four-person sled that Humphries and Meyers Taylor wanted.

Clearly, they fought through their disappointment. Humphries was the world monobob champion last year, Meyers Taylor won the monobob World Series — the equivalent of a World Cup — this season and their 1-2 finish in the Olympic race was the first gold-silver result for the U.S. in a bobsled event since the 1932 Lake Placid Games.

“The biggest thing is trying to recover as much as possible while still getting some quality training runs in,” Meyers Taylor said.

They became the seventh set of American women to grab gold and silver in the same event in Winter Olympic history, the first since Lindsey Vonn and Julia Mancuso did so in the women’s downhill at the 2010 Vancouver Games — and the first in sliding since Tristan Gale and Lea Ann Parsley finished 1-2 in women’s skeleton at the 2002 Salt Lake City Games.

“It’s been a hurry-up-and-wait type of scenario,” said Hoffman, who arrived in Beijing about three weeks ago but hadn’t been able to get on the ice. “I’ve been pretty antsy to get into the sled. I’ve been going on track walks and trying to support the ladies the best way I can until it’s my turn to jump into the sled and my turn to do what I need to do to make sure me and Elana get down the hill as fast as possible.”

Love got a few runs on the track with Humphries in the first week of February but hadn’t been on the ice in about two weeks.

“Yesterday was just incredible,” Love said. “Just to watch the way she handled all the pressure and everything that came her way, it was just inspiring and it made me super-excited to know that I’m going to be in the back of her sled in a couple days.”

“I feel like I’m making some good progress,” Meyers Taylor said. “Switching to two-man from monobob, that’s just going to take some time to get my hands ready.”

Humphries was the fastest out of 16 sleds in the first heat and second-fastest in the second heat behind defending Olympic women’s champion Mariama Jamanka of Germany. The other two German sleds in the Olympic field — piloted by Laura Nolte and Kim Kalicki — did not take part in the training Tuesday.

“It’s different having to plan and prepare and knowing that you can’t just stay up until all hours and not really care afterwards," Humphries said. “I have another race. I’m accountable to another person and still to Team USA. This is what we asked for — so here we go, right back into it again, a whole other event, but I’m really, really excited for it. I’m excited to be teammates with Kaysha and to see what we can do."