After a year of drama, the Lakers reach NBA Finals anyway 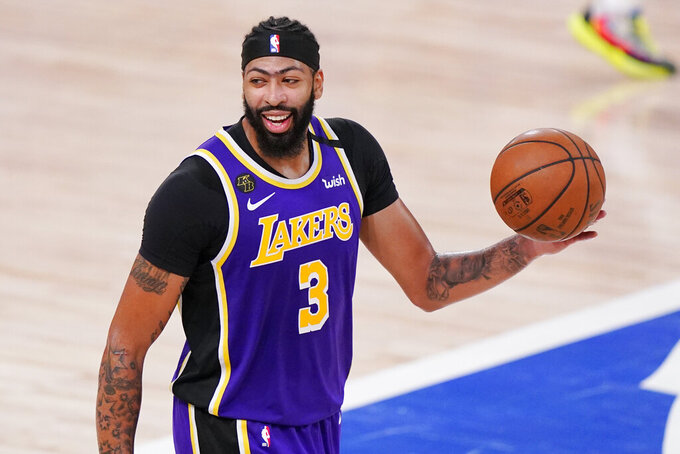 LAKE BUENA VISTA, Fla. (AP) — Here’s a list of just some of the things the Los Angeles Lakers have gone through in the last 12 months: playing through a politically charged situation in China during the preseason and more massive fallout after returning home, the death of Kobe Bryant in a helicopter crash, a pandemic and four-plus-month suspension of play, the season being moved to a bubble 2,500 miles from their homes, the ongoing battle against racial inequality in this country and emotions fraying to the point where giving up was considered.

And here they are.

After all that drama, all that angst, all those challenges, the NBA Finals await.

A most unpredictable season has a very predictable finalist. LeBron James, the once-perennial Beast of the East, is now the Best in the West. James and the Lakers are the Western Conference champions, the team’s best player now set to go to the finals for the 10th time — the first nine of those coming during his Eastern Conference stints with Cleveland and Miami — and his team set to hit the title series for the first time in 10 years, when Bryant won his fifth and final championship.

The Lakers clinched that finals berth Saturday night, ousting Denver in Game 5 of the West finals, the game just happening to be 365 days removed from the team’s first media session to start this season. Yes, that means this season is now stretching into a second year for the Lakers.

Get four more wins, and a season filled with anguish will have the sweetest possible finish.

“This is what I came here for,” James said.

James is making his ninth finals trip in the last 10 seasons; the lone exception in that stretch was last year when the Lakers didn’t make the playoffs. Anthony Davis is going to the title round for the first time. So is Frank Vogel for the first time as a head coach, after having three excellent chances with Indiana in 2012, 2013 and 2014 thwarted by James and the Heat in each of those seasons.

James has often said that he's been motivated by doubters who said he couldn't lead the Lakers back to the NBA mountaintop. Vogel has seen how that motivation drove him all season.

“So much respect for him and love for him," Vogel said. “He's empowered this whole group with just buying into the plan that we had with how we wanted to play this year and getting the whole group to buy in."

The NBA Finals will have a made-for-TV matchup, no matter what happens in the remaining one or two games of the East finals.

Miami leads Boston 3-2 in that series; if the Heat advance, it’ll be James vs. the franchise that helped him win his first two rings during the famed “Big 3" era there from 2011 through 2014, and Heat President Pat Riley going up against an organization that started him on his path toward becoming one of the best winners in the history of the game when he guided the “Showtime” Lakers to four titles in his first seven seasons running the show.

If the Celtics advance, the finals will be the two most storied clubs in NBA history — the 17-time champion Celtics vs. the 16-time champion Lakers, going head-to-head in the title series for the 13th time. And as the confetti fell late Saturday night, James confessed he looked ahead to what's next.

This season has gone on for so long, with so many twists and turns, that it's easy to forget that this is still the first run for all these Lakers being together. Vogel is in his first season as the team's coach. Davis and James were teammates this season for the first time. Just about the entire roster was overhauled last summer, which is technically two summers ago now, but still “last summer" in the NBA parlance.

They made this season look easy at times. It was anything but, and James knows the next four wins will be the toughest to get.

“The job is not done," James said.