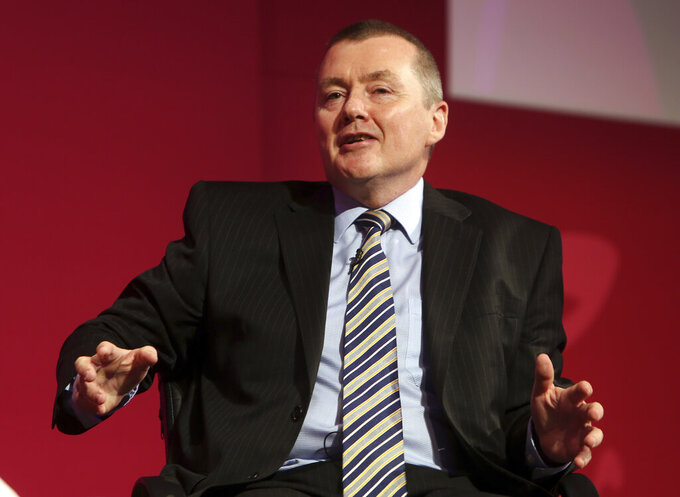 FILE - In this June 2, 2014 file photo, Willie Walsh, chief executive officer for International Airlines Group, speaks during a panel discussion of the 70th International Air Transport Association (IATA) in Doha, Qatar. The airline industry's main trade group, the International Air Transport Association, said Wednesday, June 2, 2021 that governments should use screening measures, such as testing passengers for the virus, rather than imposing quarantines and other restrictions. The group's leader, Willie Walsh, says some risk needs to be accepted in order to revive travel and tourism. (AP Photo/Osama Faisal, File)

The airline industry is ratcheting up its campaign to ease border restrictions and allow more international travel — even by people who aren’t vaccinated against coronavirus — despite high infection rates in many countries.

The industry’s trade group, the International Air Transport Association, said Wednesday that governments should use screening measures, such as testing passengers for the virus, rather than imposing quarantines and other restrictions.

The group cited studies that indicate vaccinated travelers pose little risk of spreading COVID-19. To bolster its argument to let unvaccinated people travel too, the airline group said only 2.2% of travelers to the United Kingdom between late February and early May tested positive for COVID-19 after arrival.

“There is no risk-free approach,” the group’s top official, Willie Walsh, the former CEO of British Airways and Aer Lingus, told reporters. Governments need to accept some risk “and get on with our lives,” he said.

The comments underscore the concern among airline officials that a recovery in travel might not be fast enough to make the peak summer vacation season a success. They hope that officials from the wealthy G7 countries agree to ease travel restrictions during or before a summit meeting of leaders in England next week.

Last month, U.S. and U.K. airlines asked President Joe Biden and U.K. Prime Minister Boris Johnson to lift restrictions on travel between the two countries before the summit, but neither government has acted.

The airline trade group projects that the industry will lose $48 billion this year after losing $126 billion in 2020. The group’s chief economist said last week that air traffic this year will be 52% of 2019 traffic and won’t recover to pre-pandemic levels until 2023.