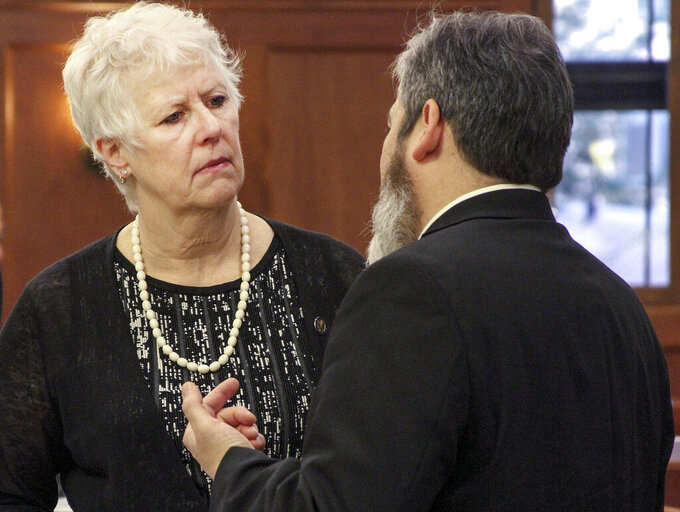 JUNEAU, Alaska (AP) — The Alaska House voted Thursday to elect Kodiak Rep. Louise Stutes as speaker, more than three weeks into the legislative session. It was not immediately clear, however, what shape a majority might take.

Merrick, in a statement released following requests for comment on her vote, said she has not joined the coalition.

“However, like most Alaskans, I have been frustrated by taking the same fruitless votes day after day and I felt we could no longer afford to delay” acting on legislation, such as Republican Gov. Mike Dunleavy's proposed extension of Alaska's disaster declaration aimed at aiding the state's response to the COVID-19 pandemic.

Merrick said Stutes has relationships with lawmakers from both parties and that her vote ensured that “no matter how organization comes together, there will be a Republican speaker.”

The vote came on the session's 24th day. One week ago, the House agreed on a temporary speaker, independent Rep. Josiah Patkotak of Utqiagvik, with members from the coalition and the Republican caucus, a member of which put forth Patkotak's name, praising his selection. But he was limited in his duties and could only entertain nominations for a permanent speaker.

In Alaska, the House and Senate don't always organize along party lines. Policy positions and personalities can also be factors. The majority caucus guides the legislative agenda and holds advantages on committees.

Stutes, in brief floor remarks after her election, said she looked forward to uniting the House. She said she was "very excited to be instrumental in bringing this House back together. Thank you. Thank you for the confidence.”

She pointed to that statement when later asked for comment and said she was “hopeful that we can come together as a House majority.”

Stutes, first elected to the House in 2014, joins Ramona Barnes and Gail Phillips as women who have been elected House speaker.

Pressure to organize has been mounting with Dunleavy's COVID-19 disaster declaration expiring this weekend. Dunleavy, who issued successive new disaster orders when lawmakers weren't in session, on Wednesday said an extension fell within the Legislature's purview, now that they are meeting.

Health and emergency officials have warned that a failure to extend the order could restrict the state’s ability to distribute vaccines and set back progress made in combating COVID-19. Adam Crum, the state health commissioner, told lawmakers expiration of the state's disaster declaration also could cost the state $8 million a month in expanded food stamp benefits.

Dunleavy said if the declaration is not extended, “we're not going to throw up our hands. We're going to just roll up our sleeves like we always have" and approach the virus in a science- and data-based way, he said.

Many lawmakers questioned the legal underpinnings of Dunleavy's prior orders even as some recently have urged him to issue a new order amid the House disorganization. House coalition members sent Dunleavy a letter Wednesday expressing support for continuing the declaration for another 30 days.

The letter came a day after Rep. Bryce Edgmon, a coalition member, said an option being considered was a “consent document” that would provide an assurance of support for another 30-day order from Dunleavy.

Dunleavy, in a news conference Wednesday, said with the Legislature in session, “it's in their hands as to whether this health emergency is extended or whether it's not. But again ... we'll take a look at what they’re offering and see if it can work.”

The Republican-led Senate has been holding hearings on Dunleavy's disaster extension bill.