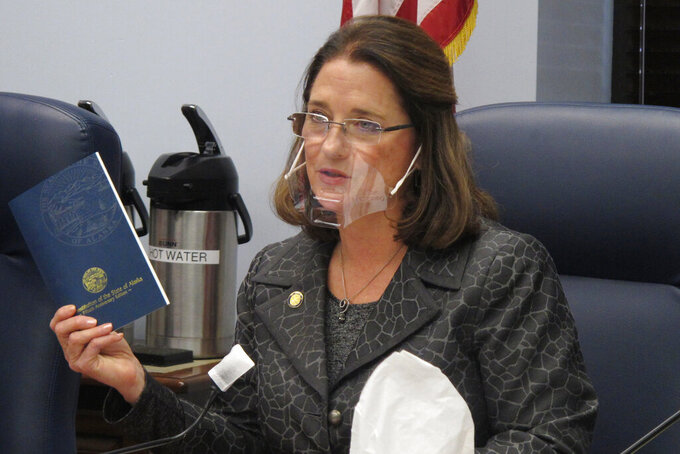 FILE - In this Wednesday, Jan. 27, 2021 file photo, Alaska state Sen. Lora Reinbold, an Eagle River Republican, holds a copy of the Alaska Constitution during a committee hearing in Juneau, Alaska. The Alaska Senate voted Wednesday, March 10, 2021, to allow leadership to restrict access to the Capitol by Reinbold, who fellow lawmakers say has refused to follow measures meant to guard against COVID-19. The 18-1 vote came 51 days into a legislative session throughout which Reinbold has worn a clear face shield that legislative leaders say runs afoul of masking rules. (AP Photo/Becky Bohrer)

JUNEAU, Alaska (AP) — The Alaska Senate voted Wednesday to allow leadership to restrict access to the Capitol by Republican Sen. Lora Reinbold, who fellow lawmakers say has refused to follow measures meant to guard against COVID-19.

The 18-1 vote, allowing leadership to enforce COVID-19 mitigation policies on members “until they are fully compliant,” came 51 days into a legislative session throughout which Reinbold has worn a clear face shield that legislative leaders say runs afoul of masking rules. This week marked the first apparent public signs of pushback against the face shield by leadership.

Senate Rules Chair Gary Stevens, a Kodiak Republican, said Reinbold also is not following testing protocols or submitting to temperature checks and questions that are standard for admittance to the building. “Inordinate” amounts of time have been spent “trying to reason” with her or provide masks that meet U.S. Centers for Disease Control and Prevention guidelines, he said.

Senators on the floor do not use each other's names but after recent dustups, including a back-and-forth between Reinbold and Senate President Peter Micciche before Wednesday's floor session, it was clear who Stevens was speaking about. Reinbold was not present for the vote.

Micciche later told reporters things came to a head following COVID-19 cases associated with the Capitol, including a person he says is close to him and hospitalized with the illness. He said the Legislature needs to ensure it can get its work done, and staff have raised safety concerns. While many people do not like the rules, “we recognize the responsibility to keep each other and our employees safe,” he said.

“And we have a zero tolerance at this point for anyone unwilling to observe those rules,” said Micciche, a Soldotna Republican.

Reinbold, of Eagle River, did not immediately respond to an email seeking comment. On social media, she said she is under “intense pressure by Senate leadership to follow controversial and arbitrarily applied” rules, and said she does not like “anyone to be forced to disclose health issues or test results,” citing privacy concerns.

She said she took a COVID-19 test this weekend “under pressure” and conveyed, “begrudgingly," the negative result to leadership.

Her actions “are to protect my constitutional rights, including civil liberties and those who I represent, even under immense pressure and public scrutiny,” she said.

Micciche said Reinbold remained chair of the Senate Judiciary Committee and a member of the Republican-led majority. He said she would be given access to the Senate gallery for floor sessions and be able to participate in committee hearings remotely. He said an “adequately equipped space” in another location would be found for her to work from in what he said he hopes is a temporary situation.

Senate Majority Leader Shelley Hughes, a Palmer Republican, said it’s the duty of lawmakers to change the rules if they don’t like them, and she said she hoped they could do that.

She changed her vote from no to yes, noting that accommodations would be made so that “every senator can still represent their district.”

Sen. Mike Shower, a Wasilla Republican, was the lone no vote. Reinbold was listed as excused.

Reinbold also has been at odds with Gov. Mike Dunleavy, a fellow Republican, who has accused her of misrepresenting the state's COVID-19 response and has refused to send members of his administration before her committee. She has called his accusations baseless.