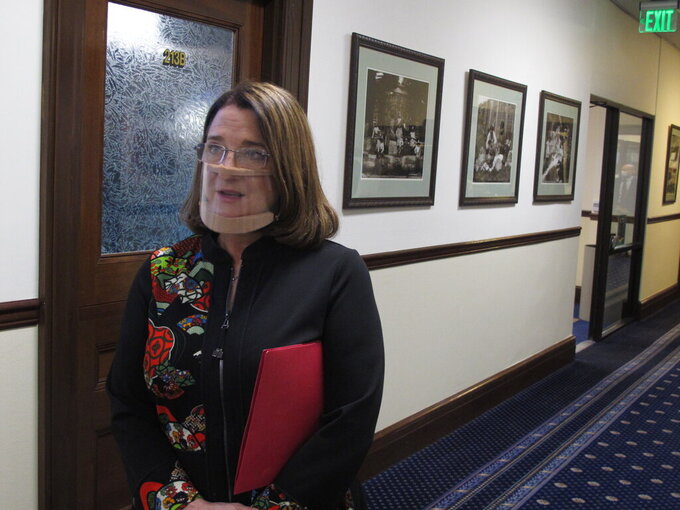 Alaska state Sen. Lora Reinbold, an Eagle River Republican, speaks to reporters on Monday, March 15, 2021, in Juneau, Alaska. Reinbold returned to her seat on the Senate floor Monday with a new face-covering meant to comply with COVID-19 mitigation policies after Senate leaders last week took action to restrict her access to the floor and committee hearings for what they said were policy violations. (AP Photo/Becky Bohrer, Pool)

JUNEAU, Alaska (AP) — An Alaska senator returned to her seat on the Senate floor Monday wearing a new face covering after Senate leaders last week restricted her access to the chamber and committee meetings for what they said was a lack of compliance with rules meant to guard against COVID-19.

Sen. Lora Reinbold walked to and from the floor session with Senate President Peter Micciche. She was wearing a clear face covering with padding that goes over the nose and cheeks and along the bottom of her face. Reinbold previously had worn a looser-fitting face shield.

“What you’re seeing this morning is the Senate organization is 100% compliant on following the rules of the COVID-19 mitigation policy,” Micciche said in brief remarks to reporters.

Reinbold, an Eagle River Republican, said agreements had been made “behind the scenes that we’re working towards because some of us are more inquisitive, and we want to know what the policy is based on and why, what the testing is based on and why and why healthy people are wearing masks with negative testing,” she said. “There’s got to be philosophical, logical reasoning behind policies.” She also cited cost concerns.

On Wednesday, 51 days into the session, the Senate voted to allow leadership to restrict access by Reinbold to the Capitol until she complies with rules aimed at curbing the spread of the coronavirus. Senate Rules Chair Gary Stevens at the time said Reinbold also had not been following testing protocols or submitting to temperature checks and questions that are standard to be allowed into the Capitol.

Meanwhile, Alaska Rep. Christopher Kurka, a Wasilla Republican, left the House floor Monday after removing his mask. Kurka had given a floor speech questioning the masking policy and how evenly it is enforced.