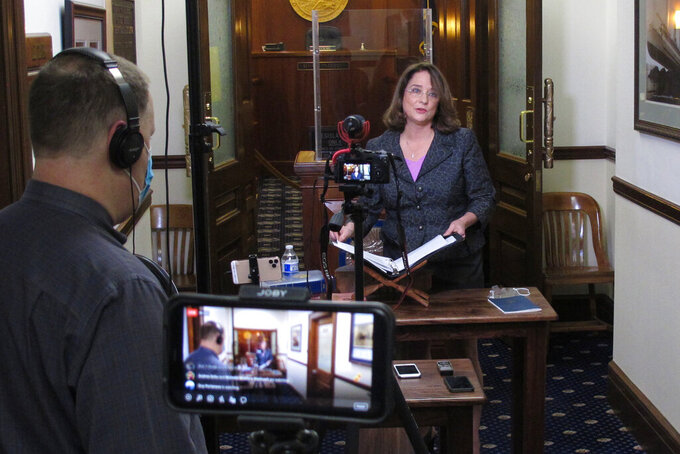 Alaska state Sen. Lora Reinbold holds a news conference outside the Senate chambers in the Alaska Capitol on Thursday, March 4, 2021, in Juneau, Alaska. Reinbold said she wants an apology from Gov. Mike Dunleavy, a fellow Republican, after he sent her a letter last month accusing her of misrepresenting the state's COVID-19 response. A Dunleavy spokesperson said the governor will not be retracting his letter to Reinbold. (AP Photo/Becky Bohrer)

JUNEAU, Alaska (AP) — An Alaska state senator sought an apology Thursday from Gov. Mike Dunleavy for a scathing letter in which he accused her of misrepresenting the state's COVID-19 response and said his administration would no longer participate in hearings she leads.

Sen. Lora Reinbold during a news conference called the reaction by Dunleavy, a fellow Republican, “outlandish” and said the Feb. 18 letter was an “attempt to intimidate those who question him and his administration and to silence those with opposing views.”

Jeff Turner, a Dunleavy spokesperson, listened to the news conference, held in a Capitol corridor. In an email later, he said Dunleavy “will not be retracting his letter” to Reinbold.

Dunleavy has been working from home while recovering from COVID-19.

Several bills that are key parts of Dunleavy's legislative agenda, including proposed constitutional amendments and a proposed change to the yearly oil-wealth check residents receive, are in the Senate Judiciary Committee, which Reinbold chairs.

The committee also has been designated to hold a confirmation hearing for Dunleavy's attorney general nominee, Treg Taylor.

Reinbold did not say whether she might seek to compel testimony from the administration. But she said she will not meet with Dunleavy "until he withdraws the letter and issues a formal apology. That is my first step, and that is what I'm hoping for.”

“We’re all grown-ups here and the public expects us to be professional and get our work done on time,” he said in a statement, adding later: "However this works out between those two individuals, the Senate’s business is going to get done in a legal and timely manner – including hearings on the governor’s appointees.”

Micciche has said he expects Senate committees to take a balanced approach. Reinbold, who has held hearings highlighting views of those who question the usefulness of masks and criticize the effects of government emergency orders, said Thursday she has brought a “diversity of thought” to the committee that has gone against the Dunleavy administration's “fear-mongering” COVID-19 message.

Reinbold and other lawmakers saw Dunleavy as overstepping in issuing pandemic-related disaster declarations when the Legislature was not in session. But she also has taken aim at health restrictions imposed by local governments and the Legislature, such as mask requirements, and raised concerns with COVID-19 vaccines.

She was pointed in November, when Dunleavy used the state's emergency alert network to warn of rising case counts, ask Alaskans to consider celebrating the holidays differently and said he would require masks at state work sites. He also urged groups to meet remotely and encouraged people to use online ordering or curbside pickup. Dunleavy at the time said hospitalizations and sick health care workers were reaching “untenable levels.”

In a social media post, Reinbold said Dunleavy “wants us to dramatically change our lives, in other words, basically to help frontline workers, that have supposedly been gearing up to take care of patients all year. Things aren’t adding up.”

She said Thursday some of the information she had requested from the administration included data on hospital capacity. The state health department has long posted online data on available hospital beds and hospitalizations related to COVID-19. The department last fall, including around Thanksgiving, was reporting weekly highs in hospitalizations.

“The bottom line is, we as Alaskans want to know why the disaster was extended over the Thanksgiving" holiday, she said, adding that seeing the data on hospital capacity that played a role in a disaster declaration around that time was important. “We need to be able to ask the tough questions.”

Dunleavy, in his letter, said Reinbold had made “many superfluous inquiries" and that her “baseless, deleterious, and self-serving demands on government resources amounts to an abuse of public services and will no longer be endured.”