Alderson: `Some of our players aren’t defensive geniuses' 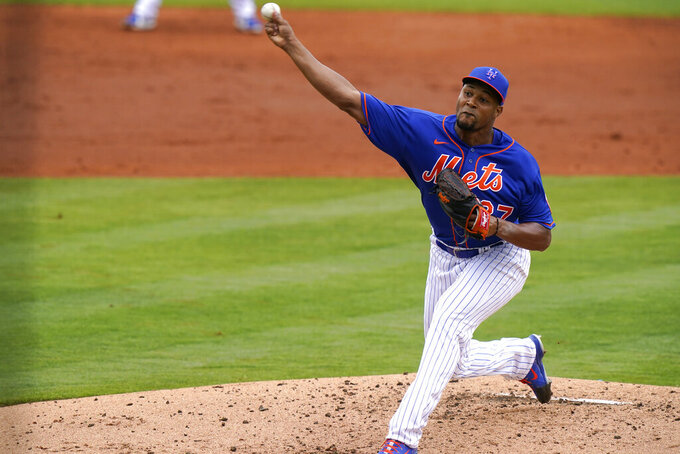 New York Mets president Sandy Alderson says he is emphasizing offense over defense but Kevin Pillar and Albert Almora Jr. were brought in to help with their gloves.

“While some of our players aren’t defensive geniuses, we think that the overall blend that we have is pretty good," Alderson said during an interview on the ESPN telecast of Thursday’s 8-4 win over Washington in Port St. Lucie, Florida.

“I totally agree with Sandy,” Mets manager Luis Rojas said. “That’s one of the things that we’re working on in this camp. We talk about baserunning. We failed today in baserunning. We got picked off at first base on a 3-2 count. That should never happen. We gave up I think it was three stolen bases, even though McCann threw the ball well. So defensively we can hurt ourselves. And we’ve seen it happen in the past. It happened last year.”

A spring training grand slam was special for the Mets’ Pete Alonso. The 2019 NL Rookie of the Year hit an opposite-field home run to right-center off Cole Henry in the fifth inning.

Alonso did not have any home runs in 45 exhibition at-bats last year after hitting 53 home runs during the 2019 regular season, the most in the major leagues and a rookie record. And he hit the slam with some special fans in the seats at Clover Park.

“Big shout out — happy birthday, mom!” Alonso said of his mother Michelle, who was at the ballpark with dad Peter. “Glad I could get a birthday bomb for you. So thank you guys for coming. It’s really nice to have my parents here at the games.”

Fans are back at spring training games in limit numbers after the entire 2020 regular season was played in empty ballparks because of the novel coronavirus pandemic.

“After the ball went over the fence, I’m like, yeah, it’s my mom’s birthday today. I got to hot a a home run on her on her birthday while she got to see me play. So this is really special,” he said. “I don’t know how to spot her in the stands anymore. It’s weird because now’s there’s people again. I don’t know, I lost my knack for it.”

Nimmo led off the game with his first home run. and David Peterson, allowed one hit in two shutout innings. Jeurys Familia, who struggled with control issues last season, walked two in a scoreless 31-pitch inning. Newcomer Trevor May walked one in a scoreless inning. Ryan Zimmerman hit his second home run, a three-run drive off Dellin Betances.

Each appeared in a Nationals uniform against major league hitters from another team for the first time, each threw one scoreless inning and each struck out a pair of batters.

“It being my first big league spring training game, it was good nerves. I wasn’t scared or nervous like that. I was just excited and just had to settle in,” Cavalli said. “I took a look around. I’m in a Nats uniform in a big league game. That’s what I’ve dreamed of since I was a kid.”

Nationals manager Dave Martinez said that righty reliever Tanner Rainey has been shut down and is limited to throwing from about 90 feet now because of a minor muscle strain around his collarbone area.

Alex Bohm hit a three-run homer off Albert Abreu, who gave up four runs in a nine-run fourth that included Rhys Hopkins' RBI single. Matt Moore allowed one hit and one walk in two shutout innings.

Deivi García allowed solo homers to Scott Kingery in the first and Odubel Herrera in the second.

Miguel Cabrera drove in his first run with a double for Detroit. Ace Spencer Turnbull allowed two runs and four hits in two innings. Cavan Biggio had an RBI triple for Toronto. Bo Bichette went 0 for 3 with two strikeouts and an error.

Alex Wood fired a scoreless inning in his first appearance since signing with San Francisco, and Joe McCarthy and Darin Ruff homered during a three-run fifth. Prized prospect Heliot Ramos had two hits. Lance Lynn, also making his debut with a new team, struck out three in two scoreless innings for Chicago.

Joey Gallo had a three-run homer and an RBI double to account for most of Texas' offense. Brock Holt doubled and scored on Nick Solak's single. MacKenzie Gore walked three over two scoreless innings in the start for San Diego. Nick Tanielu hit a three-run homer in the first inning.

Sonny Gray allowed one run and one hit in two innings for Cincinnati, a one run by Ryan O’Hearn. Kansas City's Danny Dufy gave up one run and two hits in two innings. Three days after he was scratched because of a sore right hip, Reds left fielder Jesse Winker went 0 for 2 with a walk in his first exhibition action.