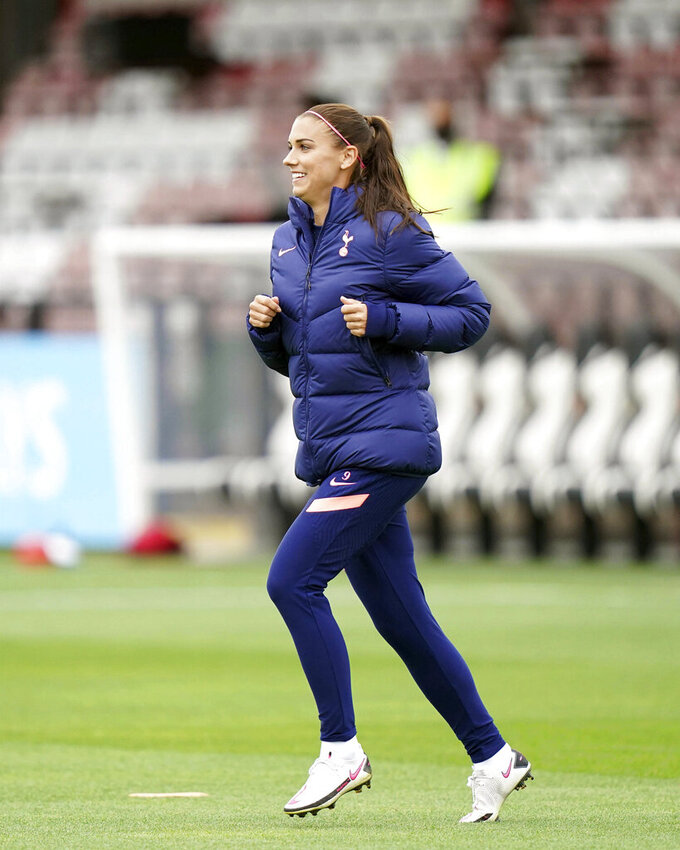 It took Alex Morgan a moment to wonder what all the laughter was about after a penalty was scored during a Tottenham training session.

The celebration, of course.

Her new teammates could not resist mimicking the tea-sipping celebration that drew the ire of the English after Morgan scored against them in the 2019 Women's World Cup semifinal victory for the Americans.

The first time Morgan could score — and play — in the Women's Super League is on Sunday when Tottenham travels to Manchester City, although she does not feel ready to play a full 90 minutes.

A month ago, the 31-year-old forward didn't envisage being in London right now. The disruption to the women's soccer season in the United States due to the pandemic led to a rapid decision to find a way to play meaningful games for the first time since giving birth in May — with the rescheduled 2021 Tokyo Olympics on her mind.

She thought staying with the Orlando Pride might mean having only four games until October and then potentially not playing again until March. Five days before the WSL transfer window was closing on Sept. 10, Morgan started quickly looking around at her options.

“By Tuesday (three days later) I had a contract drafted up by Spurs," Morgan said, “and this was when I was 50-50 if I was ready to make the move with my daughter and pull my family apart from each other.”

By the early hours of the deadline, Morgan decided to sign up for a season at Tottenham. The following week she flew to London with daughter Charlie Elena Carrasco. Husband Servando Carrasco, who plays for Fort Lauderdale in the USL, has stayed in Florida for now.

“The decision was so last minute and down to the wire with the transfer window closing," Morgan said. “Once I signed, Heather O’Reilly texted me saying that I was crazy but she respected it.”

O’Reilly, who won the 2015 World Cup with Morgan, won the WSL in 2019 with Tottenham's north London rival, Arsenal. It is a rivalry that has raged for more than a century in the men's game, but Tottenham is playing only its second season in the WSL that Arsenal has won three times.

Even before she makes her Tottenham debut, Morgan has experienced the rivalry while encountering Arsenal fans in London.

“When I wear my Spurs gear they were booing me or cheering me seeing me walking down the street,” she said. “It’s quite fun to see just how competitive clubs are here and how people are so invested in their teams.”

Morgan has played in Europe before, winning the French league and cup, and UEFA Champions League, with Lyon in 2017. But with Tottenham, Morgan knows she has joined a far bigger global brand. The men's team was filmed last season for an Amazon “All or Nothing” documentary series.

“It’s just crazy to see just the outreach that a single club can have globally,” Morgan said. “I don’t think I’ve been part of a club that has real presence in every country.”

With Morgan on board, the status of a women's team that turned fully professional only last year has been elevated further.

But she's not the only American to come across the Atlantic in recent weeks for a stint in the WSL. Tobin Heath and Christen Press signed for a Manchester United side that also debuted in the WSL only last season. Rose Lavelle and Sam Mewis joined 2016 WSL champion Manchester City, which will contest the FA Cup final next month thanks to Mewis' first goal on Thursday.

“All of them somehow landed in Manchester,” Morgan said. “I’m not sure how that happened and why I didn’t get the memo."

Not that she has any complaints that Tottenham made an offer. She grew to love the team last year after using its training complex with the U.S. before heading to France to win the World Cup.

Now it's about scoring for Spurs.

“It’s been about a year since I’ve competed in a match, and so I’m really eager to get on the field,” she said. “I am in a different part of my life, juggling being a mother, being away from my husband, and bringing my daughter here."

There's no time for tea-sipping antics.