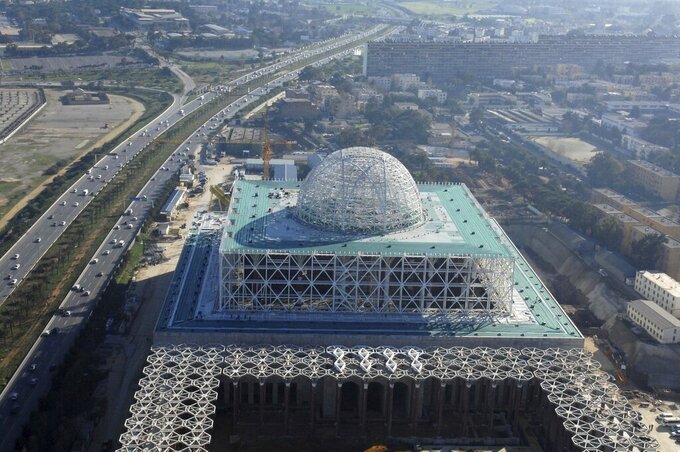 *File* In this Saturday, Jan. 7, 2017 file photo, the Mosque of Algiers is under construction in Algiers. Algeria's prime minister is finally to inaugurate a landmark mosque Wednesday that was completed last year but shuttered because of coronavirus. (AP Photo/Sidali Djarboub)

ALGIERS, Algeria (AP) — Algeria’s prime minister was set to inaugurate a landmark mosque Wednesday that was completed last year but shuttered because of coronavirus.

Abdelaziz Djerad was to open the Great Mosque of Algiers — that boasts the tallest minaret in the world — in the evening with a ceremony in the the large prayer room, and a call to prayer. The inauguration was taking place on the festival of Mawlid, that celebrates the anniversary of the birth of the Prophet Muhammad.

Because of coronavirus restrictions the public was not allowed to attend.

The North African country’s President Abdélmadjid Tebboune, who had closely followed the construction of the Great Mosque, will also be absent as he is in hospital with an unknown illness. Some of his entourage recently had coronavirus symptoms, and the 75-year-old was in isolation prior to his hospitalization, that the presidency announced Tuesday.

A more official inauguration, which will be attended by the president, dignitaries from other Muslim countries and the public, will take place at a later date.