Allmendinger back at Daytona in 1st Cup race since 2018 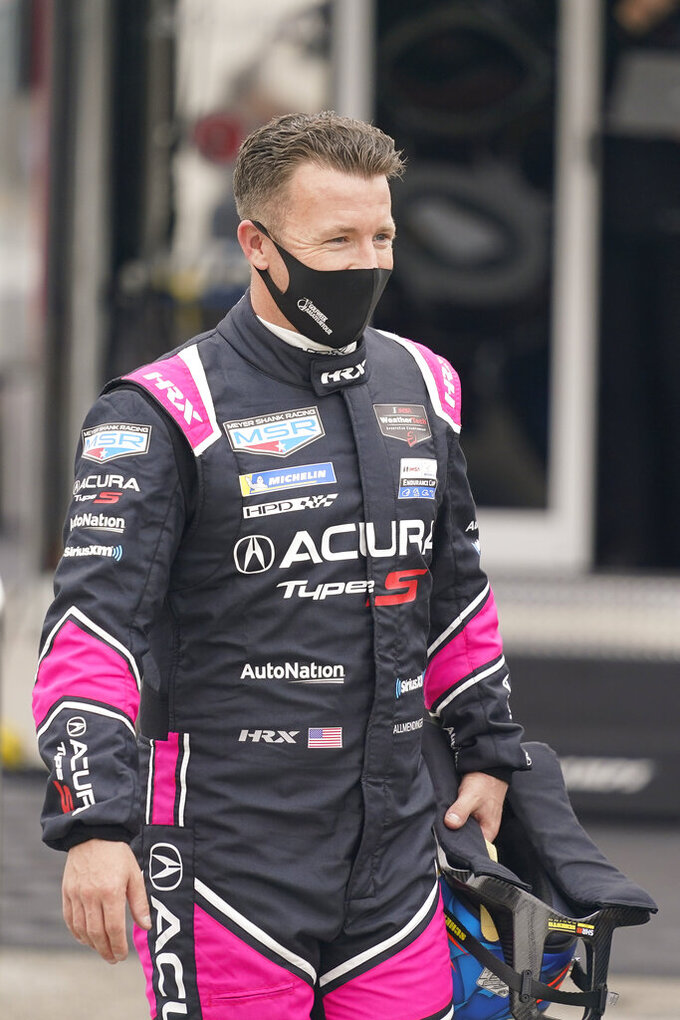 AJ Allmendinger walks back to his garage after a practice session for the Rolex 24 hour auto race at Daytona International Speedway, Saturday, Jan. 23, 2021, in Daytona Beach, Fla. (AP Photo/John Raoux)

Allmendinger will run his first Cup race since the 2018 season finale in Kaulig's first Cup race not at a superspeedway. The team last week made its second Daytona 500 — a critical first step in trying to become a full-time Cup team — and now its dusted off ol' ‘Dinger to take another shot Sunday on Daytona’s road course.

Allmendinger is a ringer with 15 appearances in the Rolex 24 sports car race in Daytona. Nearly everyone else? The bulk of the Cup field ran it for the very first time last August, when the pandemic pushed Daytona's winding 14-turn, 3.61-mile circuit onto the calendar for the first time.

His familiarity with Daytona made Allmendinger the smart pick for Matt Kaulig to take another step forward. NASCAR added Sunday's road course race to the schedule in December and Kaulig persuaded his “trophy hunter” Allmendinger to help pull the team to the top level.

“I am pumped to be racing in the Cup Series for Kaulig Racing,” Allmendinger said.

Allmendinger was weary of the grind when he lost his job at the end of 2018. He had no desire to drive for mediocre teams just to have a seat. He decided to move on with his life.

He planned to do television work and maybe moonlight for team owners he considers friends. Kaulig kept Allmendinger engaged in 2019 by giving him quality cars that could win in five Xfinity races. The program swelled to 11 races last season and the “Trophy Hunter” had three victories in 16 starts.

Allmendinger was helping Kaulig grow a program. The team started in 2016 and this season Allmendinger will run full time for the Xfinity championship as one of three Kaulig contenders. He'll also drive select Cup races as part of Kaulig's development.

Having a central role in Kaulig's push to the top has made NASCAR enjoyable again for Allmendinger. He remembered last week when Kaz Grala made his first Daytona 500 start just how special the sport had once been to him.

“I was standing next to Kaz by the car during driver intros and I think veterans sometimes, we lose sight of how big the 500 is,” Allmendinger said. “When you are just standing there and you see somebody who has made his first 500, his eyes lit up — it made me feel good.”

NASCAR this week tweaked the backstretch chicane on the Daytona course after dirt and grass played a pivotal role in the Feb. 9 messy Busch Clash.

Drivers in that exhibition learned the hard way not to cut that chicane because in short-cutting some asphalt they were dragging debris all over the speedway. Martin Truex Jr. wrecked while leading when he drove through dirt; others complained about windshield visibility.

“If there’s dirt on the track, don’t run through the dirt, that’s pretty simple,” Elliott said. “As long as there’s grass there, I’d say there’s going to be dirt underneath.”

He fell short in the Clash after spinning good friend Ryan Blaney in the 13th of the 14 turns as the two raced for the victory. Kyle Busch cruised past Elliott and Blaney for the win. Blaney had words with his buddy as they stood alongside Blaney's wrecked car.

Elliott was remorseful for ruining Blaney's race, but the Cup champion said he probably wouldn't change how he raced.

“If I’m not trying to win, then what am I doing? And I think that’s pretty cut and dry, right?” Elliott said.

Elliott is bound to be just as aggressive Sunday when he looks for a fifth consecutive road course victory. It would be his sixth overall and tie him for third on the career list with — get this — NASCAR greats Bobby Allison, Richard Petty, Ricky Rudd and Rusty Wallace.

Elliott in just five years has filled NASCAR's vacancy for king of the road. Jeff Gordon's record nine wins and Tony Stewart's mark of eight are within reach for the 25-year-old.

Daytona 500 winner Michael McDowell has a strong opportunity Sunday to give Front Row Motorsports the best start in team history.

The team has always concentrated on its road course and superspeedway programs because those circuits give small teams a competitive chance. These are the exact tracks where FRM thought it would do well, and a pandemic scheduling change gave FRM a legitimate two-week chance.

The longshot Daytona 500 win earned McDowell his first playoff berth and FRM now is positioned to build a once unthinkable cushion. McDowell was 10th in NASCAR’s debut on Daytona's road course last August.

This road course race was added to NASCAR's schedule in December because COVID-19 restrictions would not allow a stop at Fontana, California. It took maneuvering to make it work and Homestead-Miami Speedway, the original second race of the season, was pushed back one week into Fontana's original dates.

The Daytona road course was wedged into the open slot, creating two weekends of very different racing that very much suits Furniture Row. The team can now take gambles it never would dare before, and now McDowell can seriously attempt another upset. This one would make him just the sixth Daytona 500 winner to also win the next race.

NASCAR goes next to Homestead to begin a stretch of oval racing — typically the time the top teams begin to pull away.

Austin Dillon is the points leader for the first time. He finished third behind McDowell and Elliott in the Daytona 500 and ran his first Rolex 24 sports car race in January to experience the road course for the first time. Dillon missed the Cup race in August because he'd received a positive COVID-19 test. ... Elliott is the 9-5 betting favorite, followed by Truex at 3-1. Truex had one of the best cars in the Clash until he crashed from the lead and finished last in 21st. ... Kevin James is the grand marshal in a promotion for a Netflix show about a NASCAR team. “The Crew” features a handful of current Cup drivers and cars owned by Spire Motorsports.