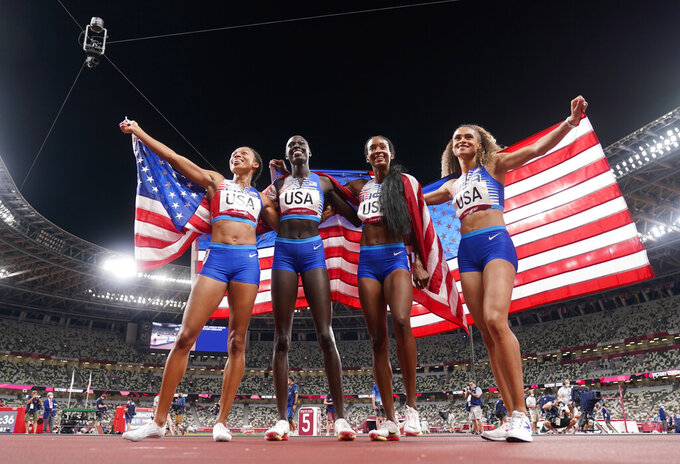 TOKYO (AP) — The second to last day of competition at the Tokyo Olympics produced a gold medal bonanza for the United States.

The Americans kept up their domination in men's basketball and women's water polo with gold medal victories in both on Saturday, and Allyson Felix won her 11th career medal with a gold one as part of the U.S. women's winning 4x400-relay team.

And the American men finally delivered a sprint gold medal in the 4x400-relay, the final track race of the Tokyo Games.

Kevin Durant scored 29 points and joined Carmelo Anthony as the only three-time men’s gold medalists in Olympic history as the U.S. held off France 87-82 to win the gold medal for the 16th time in 19 tries.

The Americans had started their tournament with a loss to France, then ran off five consecutive victories.

“Everybody was questioning us,” U.S. forward Draymond Green. “This is special.”

It certainly was for Durant, who carried the team through so many victories, and coach Gregg Popovich, who adds the gold medal to five NBA championships he’s won with the San Antonio Spurs.

“This one feels good because we went through a lot. We had a lot of first-time guys on the team, new experience for everyone on the team, COVID, the kind of bubble we were in, no fans, no one expecting us to lose," Durant said.

Popovich called coaching in the Olympics “the most responsibility I've ever felt.”

“You’re playing for so many people that are watching, and for a country, and other countries involved. The responsibility was awesome," Popovich said.

“I think when we look back at the competition we’ll be proud of ourselves," said France's Even Fournier. “We weren’t far off ... We're getting better.”

Felix became the most-decorated woman in Olympic track history when she won bronze in the 400 Friday night. She passed Carl Lewis for the most track medals of any U.S. athlete. Of her 11 medals, seven are gold.

Paavo Nurmi of Finland holds the all-time mark in track with 12 medals from 1920-28.

The team of Felix, Sydney McLaughlin, Dalilah Muhammad and Athing Mu was never in jeopardy in this one. Poland finished second, 3.68 seconds behind, and Jamaica finished third.

“Allyson is an amazing athlete. I’m astonished by everything she does, even coming out here at her last Games,” Mu said. “It’s just great to be with her, kind of starting my career off. That’s really nice.”

The American men's relay team of Michael Cherry, Michael Norman, Bryce Deadmon and Rai Benjamin won the fifth gold for the U.S. men in the 4x400 since 1996.

Masato Morishita and four relievers combined on a six-hitter, and the Japanese men matched the accomplishment of the women’s softball team, which upended the Americans for their second straight gold medal.

Malcom scored in the 108th minute and Brazil won its second consecutive gold medal in men’s soccer with a 2-1 victory over Spain. Brazil also won gold on home soil five years ago.

Brazil had a 1-0 lead at the half, but Mikel Oyarzabal tied it for Spain in the 61st minute off a cross from Carlos Soler.

Gil Bryan nearly scored in the 88th for Spain, but his shot hit the crossbar and the match went to extra time.

Spain won the gold medal in 1992 and was also seeking its second Olympic title.

China’s 12 diving medals tied the record for most won in the sport at a single Olympics. The U.S. also won 12 at the 1932 Los Angeles Games, when the Americans swept all four events and nine of the 28 divers were from the host country.

The only event the Chinese didn’t win in Tokyo was men’s platform synchro, where they finished second.

In sprint canoe, Ronald Rauhe became the first man to win a medal in canoe sprint in five Olympics when Germany won the men’s kayak four 500 meters in the final race at the Sea Forest Waterway.

Lisa Carrington of New Zealand had already won three gold medals but missed out on a fourth when the Kiwis finished fourth in the women’s kayak four 500. Hungary won the race.

Serghei Tarnovschi of Moldova returned to the Olympics to win a bronze medal in the men’s canoe 1,000 after being stripped of his 2016 bronze medal for a positive doping test.

Sifan Hassan won the 10,000 meters for her second gold and third medal of the Tokyo Olympics after entering three long-distance races.

It completed an astonishing 5,000 and 10,000 double for the Ethiopian-born runner, who now competes for the Netherlands. She also won a bronze in the 1,500 meters. Her victory in the 10,000 was her sixth race in eight days in Tokyo.

Peres Jepchirchir led a 1-2 Kenyan finish in the women’s marathon. She withstood the heat and humidity while running through the streets of Sapporo more than 500 miles north of Tokyo, winning in 2 hours, 27 minutes, 20 seconds. Her teammate Brigid Kosgei was second and American Molly Seidel, a relative newcomer to the marathon stage, took home the bronze.

Nelly Korda gave the U.S. a sweep of gold medals in golf, holding on for a one-shot victory. Korda led by as many as three shots on the back nine. In the end, she needed two putts from just inside 30 feet on the 18th hole for par and a 2-under 69.