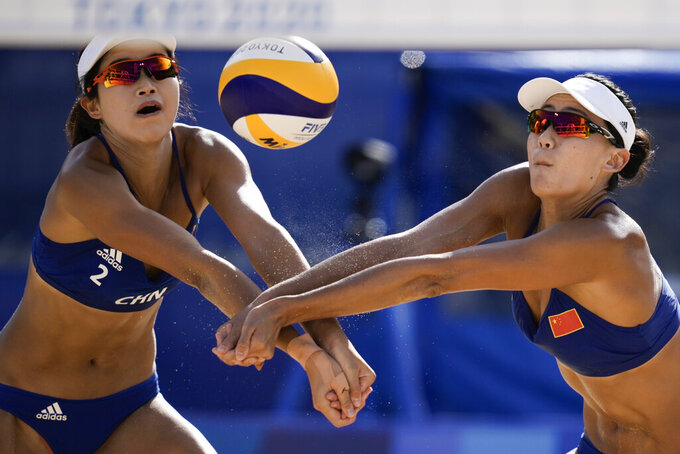 Xue Chen, right, of China, and teammate Wang Zinzin, close in on the ball during a women's beach volleyball match against the Netherlands at the 2020 Summer Olympics, Tuesday, July 27, 2021, in Tokyo, Japan. (AP Photo/Felipe Dana)

TOKYO (AP) — Americans April Ross and Alix Klineman have guaranteed themselves at least one more beach volleyball match at the Tokyo Olympics.

U.S. men Phil Dalhausser and Nick Lucena helped their chances of making the knockout round as well.

The U.S. women beat Spain 21-13, 21-16 on Tuesday morning for their second straight win. With one more game in the preliminaries left, they can do no worse than a three-way tie for first, which would be broken during a “lucky loser” matchup after the round robin.

Ross, a three-time Olympian who has already won silver and bronze, and first-timer Klineman will play the Dutch team of Sanne Keizer and Madelein Meppelink on Friday.

Dalhausser and Lucena improved to 1-1 in the round robin by beating Brazil's Alison, the reigning gold medalist, and Alvaro Filho, 24-22, 19-21, 15-13. The Americans will meet Argentina on Thursday.

Elsewhere in the men's bracket, Bruno Oscar Schmidt, Alison's partner for the gold medal win in Rio in 2016, and his new partner Evandro beat Morocco. The Polish team of Michal Bryl and Grzegorz Fijalek beat Chile, Germany beat the Polish team of Piotr Kantor and Bartosz Losiak and the Netherlands beat Argentina.

In other women's matches, the Canadian pair of Heather Bansley and Brandie Wilkerson beat Argentina, China's Wang Xinxin and Xue Chen beat the Netherlands, and the other Chinese team of Wang Fan and Xia Xinyi beat Brazil's Agatha and Duda.