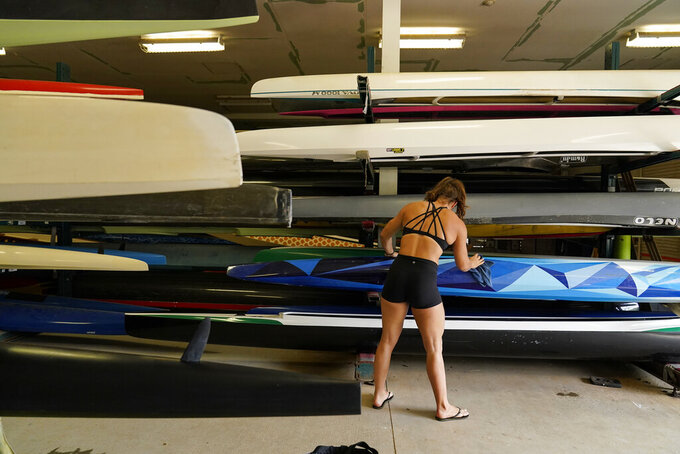 Canoe sprint world champion Nevin Harrison, 19, of Seattle, cleans her boat before she trains near Lake Lanier Olympic Park on Thursday, July 1, 2021, in Gainesville, Ga. Harrison won the world championship in the women's sprint canoe 200 meters as a 17-year-old in 2019. Now she'll try to duplicate that at the Olympics in Tokyo where the race will be a new event in a bid for gender equity. (AP Photo/Brynn Anderson)

Sometime before she races across Tokyo Bay, American teenager Nevin Harrison will likely paddle her canoe to a quiet spot and have a good cry.

Harrison’s pre-race tears are a pressure-valve release, meant to settle and refocus the 19-year-old before the start of a furious sprint of pain and muscle across 200 meters of water.

She knows it's a bit odd. But who can argue with a routine that helped crown her world champion at age 17 and has her as a favorite to win the first women's Olympic gold medal in the debut event of women's sprint canoe?

“I get really stressed, I get really worked up and bottle it up, and right before the race, it just kind of comes out," Harrison said. “And then ... everything is a little bit more calm.”

At least until the race start, when Harrison attacks the water — “like a horserace” — with a powerful thrust that won her a stunning world title in 2019, and upended the pecking order in a sport she'd picked up barely five years earlier on a lark at the end of summer camp.

She followed that championship with world cup victories in 2020 and 2021 and heads to the Tokyo Games carrying a mountain of expectations on her broad shoulders.

Spoken like a teenager who was perhaps surprised by her meteoric success, and who is now both awed by, and prepared for, the Olympic stage.

But an extra year of maturing, physical growth and enhanced training forced by the Olympic pandemic delay, allowed Harrison to shed the shock of the world title and embrace the role of favorite.

“I was nowhere near ready to be competing in an Olympics a year ago,” Harrison said. “In 2019, winning worlds was a shock to me. Even going into 2020, I didn’t really know what I was doing. Everything was coming really fast and I had no idea how I got to where I was and had not enough time to get to where I needed to be ... It was stressful and scary.”

And it was a long way from that summer camp outside Seattle when she first tried the sport at the urging of a counselor. She needed a sport. Track and field, her love, was going to be painfully impossible with a diagnosis of hip dysplasia that promised constant pain.

Sprints on the track turned into sprints across water and learning how to not fall out of the boat.

Her parents quickly sensed big things could be on the horizon as they watched her first learn how to stay dry, then develop skill, rhythm and raw muscle in the pre-dawn chill of practice in the winter mornings in the Pacific Northwest.

“She was falling out of the boat for a year before she really learned how to balance it out,” said her mother, Laura Worthen. “By 13 and 14 she was starting to pull away from the pack.”

She started climbing the junior ranks and won an Olympic hopefuls event in 2017.

“That’s when I knew," said her father Mark Harrison, "that I was going to enjoy this ride.”

Still, she was an outlier internationally in a sport long dominated by the Europeans. Then came her lighting strike win in Hungary in 2019.

Nevin went to the championships hoping to finish top six with an outside shot at a medal. That's when a teammate shook his head at a naive 17-year-old who didn't realize what was really in front of her.

“You don't get it,” he laughed. "You realize you can win this thing?’”

“The first time she won the world championship, no one was noticing her. The announcer was essentially asking where did she come from during the race," Mark Harrison said.

Nevin bolted to an early lead and never let up. At the finish line, she looked at the results in disbelief and covered her mouth to stifle a gasp. The medal ceremony was briefly delayed because event officials couldn't find an American flag. They'd never needed one before.

That was two years ago. The competition won't overlook her at the Olympics, when everyone is chasing the same dream to win the first gold medal in the women's canoe sprint 200. Harrison's race and the women's canoe 500 double will debut as Olympic events in Tokyo.

Women's canoe sprint is still a young sport at the international level. It wasn't a world championship event until 2010. And to balance gender equity among events in Tokyo, Olympic officials dropped the men's canoe 200 and the men's kayak double 200, moves that didn't sit well with some male athletes who complained events were being sacrificed.

At the Rio Games in 2016, several male athletes mocked the idea of women in canoe sprint.

Harrison said she's sympathetic to anyone who lost an Olympic spot, but is determined that the women have earned their shot in Tokyo.

“It's exciting to be leading that charge showing we are equal and we can do the same things," she said. “Once an event becomes an Olympic sport, the depth and the athlete pool become so much bigger because it becomes something people want to invest their time in.

"Everyone wants to be an Olympian," Harrison said. "I think it's more important to have every group represented rather than having a lot in just one gender or discipline.”