Amid COVID, many businesses in precarious spot as 2020 ends 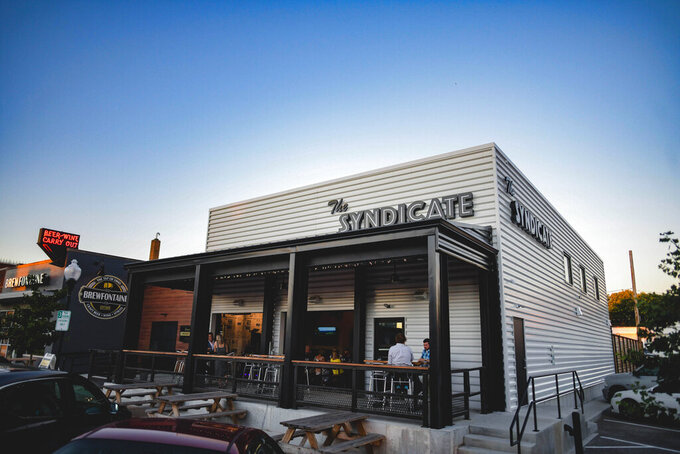 This photo provided by Adam M. Rammel shows The Syndicate on Aug. 20, 2020 in Bellefontaine, Ohio. Ohio’s restrictions forced Adam Rammel to at least temporarily abandon plans for a catering and event space designed for parties and that opened last month, in time for the holidays. Rather than have the space sit unused, Rammel turned it into The Syndicate, a restaurant located next door to his 5-year-old brewpub, Brewfontaine. (Susie Jarvis/Adam M. Rammel via AP)

NEW YORK (AP) — The final three months of the year, usually a boom time for many small businesses thanks to holiday shopping and celebrations, looks precarious as the coronavirus maintains its grip on the economy.

Owners contending with government restrictions or crumbling demand are trying to hold on, with some creating new products and services or desperately searching for new customers. Others, however, have found they’re already well equipped to meet the lifestyle changes brought about by the pandemic.

The big corporate and non-profit parties and events that Sophia D’Angelo ran before the virus outbreak have just about vanished. Large in-person gatherings that companies typically use to launch or promote their brands aren’t possible because of social distancing requirements.

“The fourth quarter was always the bulk of my business,” says D’Angelo, who owns Boston Experiential Group, based in Boston.

D’Angelo has had to get creative. She’s using her expertise to arrange small gatherings like holiday-themed dinners and parties at people’s homes, usually for no more than 10 guests.

The fourth quarter is a key time for many industries and companies of all sizes. Some retailers typically expect to make as much as half their annual revenue during the holiday shopping season, as do many of their suppliers. Any business connected with holiday parties and celebrations also has high hopes for the October-December period.

But conditions are dicey this year. The coronavirus has devastated many small businesses; it’s estimated that hundreds of thousands already have closed forever. Many of the survivors are expected to struggle further during this quarter, especially as cases of the virus surge in some areas of the country. More businesses — restaurants and retailers in particular — will likely go out of business if they cannot bring in the revenue they need.

Restaurants face a difficult time as state and local governments limit the number of people they can serve. The impact of the social distancing can be seen in sales figures — the National Restaurant Association reported that 70% of restaurants suffered a drop in revenue during August from a year earlier.

Ohio’s restrictions forced Adam Rammel to at least temporarily abandon plans for a catering and event space designed for parties, in time for the holidays. Rather than have the space sit unused, Rammel turned it into The Syndicate, a restaurant located next door to his 5-year-old brewpub, Brewfontaine.

Rammel, who worried about the future of his Bellefontaine, Ohio, business when he was interviewed by The Associated Press in April, said he’s “hanging in there” but still concerned because dining is limited by social distancing. With tables six feet apart, he can serve 65 people at Brewfontaine instead of his full capacity of 100. And he has to stop serving alcohol at 10 p.m., four hours earlier than pre-pandemic. Combined revenue from both restaurants is down more than a third from where Rammel projected it would be.

“I don’t think there’s any chance to break even with where we expected to be,” Rammel says.

Barking Irons, a maker of apple brandies, is heavily dependent on the bars, restaurants and liquor stores of New York City for its business. The company typically makes half its revenue in the fourth quarter.

The city’s social life, and economy, remains constrained by the pandemic. Restaurants can have only a quarter of their capacity indoors and there’s no bar service. And while outdoor dining will continue indefinitely, it’s hard to predict how many people will be willing to brave the cold — even with a brandy to warm them.

The other side of Barking Irons’ business is picking up some slack — the distiller has boosted sales to liquor stores as more people drink at home. Overall sales won’t double, as they had every year since the brand launched in 2017, but Ashley Purdum, marketing director for Barking Irons, is hoping to break even.

“If we can just remain even in a time of pandemic, if we can hit our same numbers as last year, we’ll be happy,” she says.

Business is down sharply during what’s normally the busy season for Tower Press, a manufacturer of promotional items like pins and shot glasses. Trade shows and conferences have been canceled, so companies no longer need to order giveaways to hand out to attendees. They’re also not buying holiday gifts for customers.

“Many of our clients are small businesses who need to decrease their spending in order to stay afloat,” owner Susannah Caviness says. While before the pandemic she might take in a total of $1,000 in orders in a day, Caviness now often sees less than half that amount.

Caviness, who’s based in Atlanta, moved her office to her home and scrapped plans for a second office in Los Angeles, given the uncertain prospects for the fourth quarter and beyond. She’s trying to bring in new business; she’s increased her social media marketing budget by 50% and is emailing prospective clients.

The cancellation of weddings, parties, formal dinners and other social events means less need for invitations and other products from Dulles Designs, a creator of upscale printed stationery. But the company has discovered a saving grace.

Owner Emilie Dulles says printed holiday cards that have seemed outdated in recent years are suddenly popular again among individuals as well as businesses. Dulles’s customers say the pandemic has made them rethink how they stay in touch. They are sending cards they never bothered with before, like Thanksgiving cards, and some recipient lists can include hundreds or even thousands of names.

“They’re trying to connect with people they haven’t seen in years,” Dulles says.

Dulles believes the shift in fourth-quarter business will help offset the loss of wedding and event business. But she’s not rushing to hire her usual contingent of seasonal workers.

“We’re going to take a look and see how the next few weeks go,” she says.