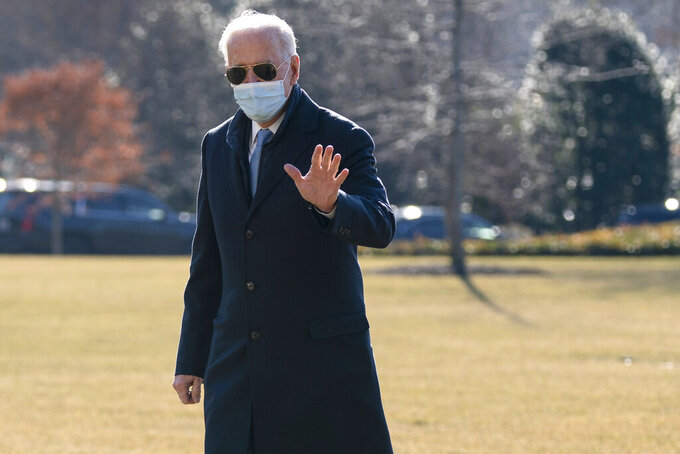 President Joe Biden waves to reporters as he arrives on the South Lawn of the White House, Monday, Feb. 8, 2021, in Washington. (AP Photo/Evan Vucci)

BALTIMORE (AP) — Tucked inside President Joe Biden’s $1.9 trillion coronavirus relief plan is a seemingly radical notion that children should not grow up in poverty.

Congressional Democrats are now sketching out that vision more fully by proposing to temporarily raise the child tax credit, now at a maximum of $2,000, to as much as $3,600 per child annually. Their plan would also make the credit fully available to the poorest families, instead of restricting it based on the parents’ tax liability.

“The Democratic plan would likely mark the most significant step in the fight against child poverty since LBJ’s Great Society,” said Daniel Hemel, a law professor at the University of Chicago, who noted that a family with two school-age children and no income would get $6,000 under the proposal.

This one-off benefit is intended to help relieve millions of families hurt by the fallout from the coronavirus pandemic. Parents have lost their access to child care, pushing them out of the labor force and hindering the economic recovery. Children have gone without the classroom time needed for social and academic progress.

When Lyndon Johnson became president in 1963, nearly 25% of children lived in poverty. The combination of Great Society programs that included nutrition aid and preschool funding helped slash the child poverty rate to 14% by 1969, according to the Census Bureau. The rate has since bounced up and down with the broader economy, but it has never fallen meaningfully below that 1969 level.

Biden has pitched his rescue plan as an immediate response to the pandemic, but the child tax credit expansion might end up seeding the kind of lasting change that tends to bring a political fight. Some conservatives say the plan would discourage parents from working and would not reduce poverty as a result. But liberals view it as an investment in children that needs to stay in place to ultimately improve people’s lives and the economy.

“This is a really bold idea,” said C. Nicole Mason, CEO of the liberal Institute for Women’s Policy Research. “Things that we wouldn’t have been talking about as possible a year before the pandemic are suddenly on the table — and this is one of those things.”

In a Friday speech about his full COVID-19 relief proposal, Biden said the spending would ultimately lead to durable economic gains. His plan includes funding for school reopenings, child care and other programs to help the youngest Americans.

“The simple truth is, if we make these investments now, with interest rates at historic lows, we’ll generate more growth, higher incomes, a stronger economy and our nation’s finances will be in a stronger position as well,” Biden said.

Past economic research has shown that each dollar spent on health insurance programs for children led to a $1.78 return for the government, according to a 2020 paper by Harvard University economists Nathaniel Hendren and Ben Sprung-Keyser. The argument from many economists is that financial relief for children would produce similar benefits for decades to come.

But conservatives say the increased child tax credits could discourage poor people from seeking jobs. Robert Rector, a senior research fellow at the conservative Heritage Foundation, said he believes the proposal would eventually undo the work requirements that were part of the 1996 overhaul of welfare, a reform that Biden voted for as a Delaware senator.

As outlined by the House Ways and Means Committee, the expanded child tax credit would likely help about 20 million lower-income people. Families would receive up to $3,600 annually for each child under age 6 and as much as $3,000 for those up to 17. The credit would start to phase out for individual parents earning more than $75,000 and couples making $150,000. Payments of the credit would be made monthly, even to families who owe no federal income taxes — a change from current policy.

The plan has shifted some of the politics around child poverty. Republican Sen. Mitt Romney of Utah last week proposed his own plan to provide at least $3,000 per child to families, but the payments would be funded by cutting other government programs and tax credits for parents. It’s unlikely that Democrats would back Romney’s plan because it would cut other forms of aid to children, meaning it has not gained much political traction so far.

Researchers at Columbia University estimated that Biden’s entire $1.9 trillion relief plan would slash the child poverty rate to less than 7% this year.

Supporters of the package also see a return to grappling with big ideas about poverty that has not occurred for decades. The child tax credit is possibly the start of a larger transformation in how the government addresses child poverty.

“A one-year improvement is great, and it puts the architecture in place,” said Michelle Dallafior, senior vice president for the advocacy group First Focus on Children. “But we need to keep doing more and build something permanent. ... No child should live in poverty.”

EDITOR'S NOTE: Josh Boak has covered the U.S. economy for The Associated Press for six years.