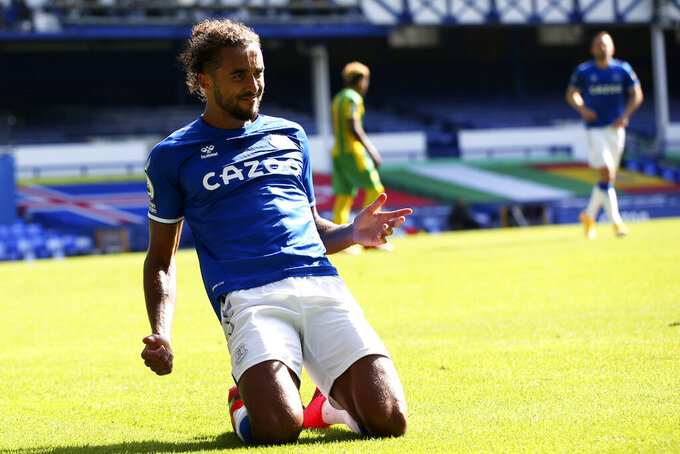 A stoppage-time goal by Gabriel Jesus did more than just clinch a significant win for Manchester City at Wolverhampton.

It capped a record-breaking round of scoring in the English Premier League, too.

A total of 44 were scored in a wild second round of games from Saturday to Monday, surpassing the record for a single round since the league was reduced to 20 teams in 1995.

At least seven goals were scored in three separate games, only the third time that has happened in the Premier League era (since 1992).

From Dominic Calvert-Lewin’s hat trick for Everton in the early kickoff on Saturday to Son Heung-min’s four-goal burst for Tottenham a day later to Man City’s commanding 3-1 win at Wolves on Monday, the goals flew in across the empty grounds of the world’s most-watched league at an average of 4.4 per game.

Maybe it was just one of those weekends.

Or maybe there are some logical reasons behind the high goal count.

Without fans in the stadiums, there's a different atmosphere for games that can sometimes resemble high-intensity training ground exercises. Players invariably are more relaxed without the crowd on their backs. Playmakers and forwards, especially, might feel more able to express themselves without being subjected to groans if an ambitious pass or speculative shot doesn't come off. Players might feel under less pressure when they are through on goal. Penalty-takers, for example, might not feel under so much strain without crowd noise during their run-up. There have been 11 spot kicks converted already this season — though two have been saved, too. In an English League Cup match last week, there was a score of 11-10 in a penalty shootout. However, there were no fans in Premier League grounds after play restarted post-lockdown near the end of last season and the 2.72 goals per game in that period was exactly the same ratio as pre-lockdown. There were two fewer shots per game post-lockdown, too, so other reasons also might be pertinent.

Coaches typically use the preseason to get their players fit and nail down an approach or tactics ahead of the new campaign. Yet for 2020-21, there has barely been a preseason because of the late finish to last season. Teams have had very few friendlies to get sharp or organized, and trainings have been disjointed because of an international break and, in some cases, players testing positive for COVID-19. Look, for example, at Manchester United, whose players returned late to preseason training because of their involvement in the latter stages of the Europa League and had one hastily arranged friendly against Aston Villa. Paul Pogba contracted the coronavirus, while Aaron Wan-Bissaka and Mason Greenwood had to quarantine for various reasons. United lost at home to Crystal Palace 3-1 in its first game. “They were sharper than us in the challenges, tackles,” United manager Ole Gunnar Solskjaer said. “We had a long season last season and we didn’t finish until Aug. 16, and we’ve not had enough preparation time to be sharper.” Because of the abnormally short offseason, players are unlikely to be as fit as they usually are for the start of a season. Tired bodies and tired minds can lead to more mistakes — and more goals.

Two rounds into the new season and it is already clear that the three promoted clubs have low-quality defences which are going to be conceding plenty of goals. Leeds, Fulham and West Bromwich Albion have allowed 22 between them — accounting for about a third of the total scored so far. Fulham conceded a league-high 81 goals when the team was relegated two seasons ago and its defense, which contains the same players who played in the Championship last season, looks just as porous this time. Similarly, West Brom hasn’t improved its back line in the offseason and has an attack-minded coach in Slaven Bilic who showed in a previous stint at West Ham that building a solid defense isn’t his forte. Then there’s Leeds manager Marcelo Bielsa and his gung-ho tactics, which were on display for all to see at Anfield on the opening weekend when they went man-to-man against the defending champions. It was entertaining, but Liverpool scored four goals and it could have been many more.

There is an abundance of top-quality forward players in the Premier League at the moment, and more are arriving. Manchester City and Liverpool have long had the most devastating strikeforces but Tottenham’s will look just as exciting when Gareth Bale links up with Harry Kane and Son Heung-min, the pair who combined for four goals against Southampton on Sunday. The arrival of James Rodriguez has improved the scoring output of Everton, right winger Willian had three assists on his debut for Arsenal, while Chelsea has spent around $200 million to bring in attackers Timo Werner, Kai Havertz and Hakim Ziyech. Add Christian Pulisic to the mix, and imagine what that quartet could do this season? Also adding to the likelihood of more goals this season is the fact that the Premier League has been told by FIFA to be stricter with its application of handballs by defenders, therefore falling in line with other European leagues. “The directive now is that any outstretched arm from the body, any hard or arm below the shoulder, will be punished, irrespective if its deliberate or not,” former referee Dermot Gallagher told Sky Sports. Leeds’ Robin Koch and Man United’s Victor Lindelof have already fallen foul of that. There have been 13 penalties already.