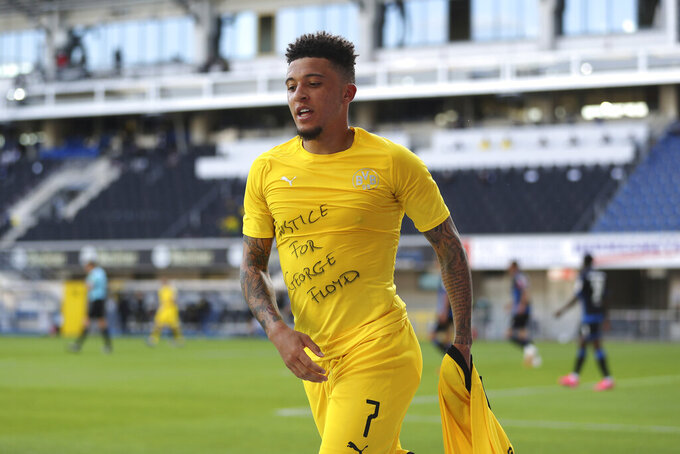 Jadon Sancho of Borussia Dortmund celebrates scoring his teams second goal of the game with a 'Justice for George Floyd' shirt during the German Bundesliga soccer match between SC Paderborn 07 and Borussia Dortmund at Benteler Arena in Paderborn, Germany, Sunday, May 31, 2020. Because of the coronavirus outbreak all soccer matches of the German Bundesliga take place without spectators. (Lars Baron/Pool via AP)

To most watching Borussia Dortmund star Jadon Sancho remove his jersey to reveal a handwritten “Justice for George Floyd” message on his undershirt, it was a powerful expression of activism on a soccer field.

To the Bundesliga referee overseeing that game, it was an action requiring punishment.

Rarely has a rule looked so out of touch.

At one of the world’s few globally televised sports on Sunday, Sancho showed the soccer world Floyd’s death resonated far beyond the United States.

Floyd, a black man, was filmed gasping for breath on Monday in Minneapolis while being pressed under the knee of a white police officer for several minutes. Floyd’s death has sparked days of protests across the U.S.

And four players this weekend in German soccer took a stand in support of the protesters, making their point in the first major soccer league to resume during the coronavirus pandemic.

The German soccer federation confirmed on Monday that the referee who penalized Sancho, Daniel Siebert, was following global soccer rules when he showed Sancho a yellow card. FIFA rules state players should be cautioned for removing their jersey while celebrating. Sancho could face a further sanction for breaching a 6-year-old rule prohibiting messages on undergarments — from the political and religious to the personal.

But in removing his jersey to reveal the slogan, Sancho highlighted a cause far bigger than sports.

“The booking of Jadon Sancho, or any other player, for making a statement in support of a man who has been unjustly killed is the wrong decision,” Piara Powar, executive director of soccer’s anti-discrimination Fare Network, told The Associated Press. “This is not a party-political cause, or an issue that poses a threat to football but an expression of concern and solidarity from minority players.”

Dortmund teammate Achraf Hakimi revealed his own yellow “Justice for George Floyd” T-shirt when he netted Dortmund’s fourth goal against Paderborn. The Moroccan was not booked because he only partially removed his jersey.

“Rather than commenting on what a player should or shouldn’t be doing,” said Mary Harvey, chief executive of the Centre for Sports and Human Rights, “shouldn’t our focus be on why players felt the need to do this in the first place?”

San Francisco 49ers quarterback Colin Kaepernick took a knee during the national anthem in 2016 in silent protest of police brutality and racism that kicked off a period of pregame activism in the NFL.

Bundesliga player Marcus Thuram invoked Kaepernick on Sunday after he scored for Borussia against Union Berlin, dropping to his left knee. and resting his right arm on his right thigh and bowing his head.

A day earlier, American midfielder Weston McKennie of Schalke, wore an armband with the handwritten message “Justice for George” around his left arm.

“I am proud of them,” Keller said. “From a moral standpoint, I completely understand their actions on the weekend.”

But Keller's expression of sympathy appeared within a statement announcing the players could yet face disciplinary action because the federation says games “should remain free of political statements or messages of any kind.”

“Denying high-profile athletes an opportunity to express concern on big issues,” Piara said, “is neither correct nor can it be controlled in the post-Kaepernick era.”

European soccer has been plagued by racial incidents at games, with few people facing consequences. As a young black player, Sancho has spoken out against the scant punishment for offenders in the stands and on the field.

“It puts the confidence down in players,” he said last year, “and the love of the sport will go very soon if it doesn’t stop.”

From Kaepernick to the NBA’s LeBron James to Sancho, athlete activism is not going away.

Had Sancho, a 20-year-old England international, received a second yellow card in Sunday’s match for Dortmund, he would have been ejected.

“It is a disciplinary reaction to a fundamental assertion of human rights and that is precisely what we don’t need right now,” Brendan Schwab, executive director of World Players Association, told the AP.

Three years ago, FIFA made a commitment to respect human rights in places the governing body hosts events. Denying players the right of freedom of expression inside stadiums is in direct conflict with that commitment.

“How can it be that certain rights are not available on a sports field?” Schwab said. “Sport needs to embrace the positive consequences that will come from it being a social leader, particularly at a difficult time.”

English teams took up the cause on Monday. Players from Premier League leader Liverpool posted images of themselves taking the knee on the field at their Anfield stadium. Chelsea said it stood with Floyd and “all victims in the fight against discrimination, brutality and injustice”. Manchester United star Paul Pogba spoke of his “indignation, pain."

Sanctioning players in Germany for campaigning against intolerance will create fresh indignation.

Rob Harris is at www.twitter.com/RobHarris