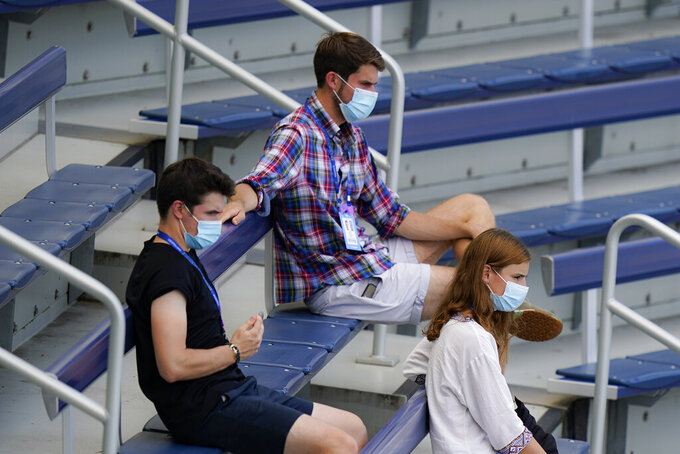 NEW YORK (AP) — Andy Murray wore a coronavirus-conscious mask on his way to the unusual, no-spectators setting and avoided handshakes when he left. In between, the three-time Grand Slam champion offered his usual mix of hustling and muttering.

Murray's first match in nine months as he resumes his climb back from two hip operations came at the first ATP tournament for anyone in five months, a 7-6 (6), 3-6, 6-1 victory over Frances Tiafoe at the Western & Southern Open on Saturday.

“Physically, I thought I did pretty well,” said Murray, who won Wimbledon twice and the U.S. Open in 2012. “I moved maybe better than what I expected to.”

The men's tennis tour had been suspended since March because of the pandemic; the resumption came at a hard-court event moved from its home in Ohio to the site of the U.S. Open, which begins Aug. 31.

“To have no sound during the whole match, it was really odd,” said No. 15 seed Auger-Aliassime, the first winner of an ATP match since March, 6-4, 6-1 against Nikoloz Basilashvili. “Obviously, we’re used to it in practice, but now it's an important match, it’s a Masters 1000, and to have nobody, to have no crowd, it feels weird.”

“I was ready. I was training ... these last couple months and throughout the pandemic,” Shapovalov said. “It didn't really faze me that I hadn't played in a while.”

The women's tour returned earlier this month, and among Saturday's first-round results in New York was No. 13 seed Maria Sakkari's 6-1, 6-3 win over 16-year-old Coco Gauff, while No. 9 Elena Rybakina was eliminated by Ekaterina Alexandrova 7-5, 7-6 (6), and 18-year-old Amanda Anisimova beat No. 11 Alison Riske 6-3, 6-3. Two-time Australian Open champion Victoria Azarenka defeated No. 15 Donna Vekic for her first tour win in a year, while 40-year-old Venus Williams lost to 20-year-old Dayana Yastremska 5-7, 6-2, 7-5.

Murray had surgery on his hip in January 2018, and again in January 2019, and while returned to action later last year, a pelvic problem prevented him from playing at the start of 2020.

There were stretches against Tiafoe — who pulled out of an exhibition event in Atlanta last month after testing positive for COVID-19 — where Murray looked as if he'd never left. That included when the former No. 1-ranked man erased a 5-2 hole in the tiebreaker to grab six of that set's last seven points, capped by a down-the-line forehand passing shot.

After Tiafoe was better in the second set, Murray quickly regained control. He broke for a 2-0 edge in the third with some classic scrambling defense on a 13-stroke exchange until Tiafoe flubbed a volley.