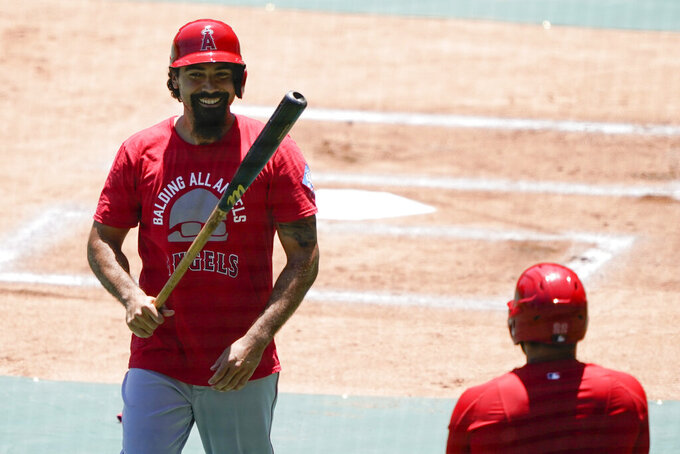 Anthony Rendon is more than ready to get to work earning his riches, and the World Series winner doesn't think it will take long for baseball's best players to get back into championship form.

“As we get older, we know what we need to do to prepare ourselves for a game as men, as professionals,” Rendon said Thursday. “I think there's a little bit of a light switch deal, where we know that we’ve got to go right now. We can kind of turn it on and say we need to get down to business, and I need to bear down because the real deal is about to happen. If the season started today, I think a lot of the guys, including myself, would be ready.”

Rendon is getting to know his teammates again after his first year with the Angels was interrupted by the coronavirus pandemic before he even got a chance to play in Anaheim.

The most coveted hitter on the free agent market earned his mammoth deal by hitting .319 with 34 homers and a majors-leading 126 RBIs last season before leading the Washington Nationals to their first World Series title.

Rendon symbolically closed out the first chapter of his pro career Thursday morning by getting his World Series ring from the Nationals, although the straight-faced third baseman said his next step was to “find the closest pawn shop.”

He was only joking about his frustration over the lengthy coordination process of getting the ring shipped, but he's firmly focused on his future in Orange County.

Manager Joe Maddon also left the National League to join the Angels this season, and he has a long-standing familiarity with Rendon's bat and mentality. He agrees with the third baseman's belief that good ballplayers will find motivation on their own terms in this short season, whether it's about dealing with the lack of a full spring training or the absence of fans.

Rendon has thought about the challenges of playing without fans, but the preternaturally calm playoff performer doesn't think artificial crowd noise is the answer. Angel Stadium experimented with piping in fans' cheers during an intrasquad game Wednesday, but Rendon called it “stupid.”

“It's like you have two of your senses that aren't coinciding with one another,” Rendon added. “It's like you're looking at a pizza, but you're smelling a hamburger. You hear noise, but you know nobody is in the stands. You don't see anybody. It's dumb. I'd rather listen to music.”

Rendon is much more supportive of baseball's health and safety measures, although he admits he wasn't going to be interested in doing much partying anyway with two daughters under age 3 waiting at home.

The Angels have collectively vowed to stay out of restaurants and bars for the duration of the short season, and Rendon thinks it's smart.

“We have a lot of high-risk people that are on staff,” Rendon said. “We have a lot of players that have family members at home that are higher risk, so we have to wear our masks to protect other people. At this time, we have to be selfless toward everyone around us, because we don't know what everyone's situation is. This is a good opportunity for us as a world to realize that selfishness doesn't go a long way, so we have to look out for one another.”

NOTES: Left-hander Patrick Sandoval and two-way player Jared Walsh both reported to the Angels' summer camp and went through workouts Thursday. They were among several players who hadn't been in camp without any explanation from the Angels. ... The Halos also added right-hander Adrian De Horta to their player pool. ... Thursday's intrasquad game featured mostly minor leaguers. The big-league starters are expected to play Friday.