Antibody drugs are no cure but seem promising for COVID-19 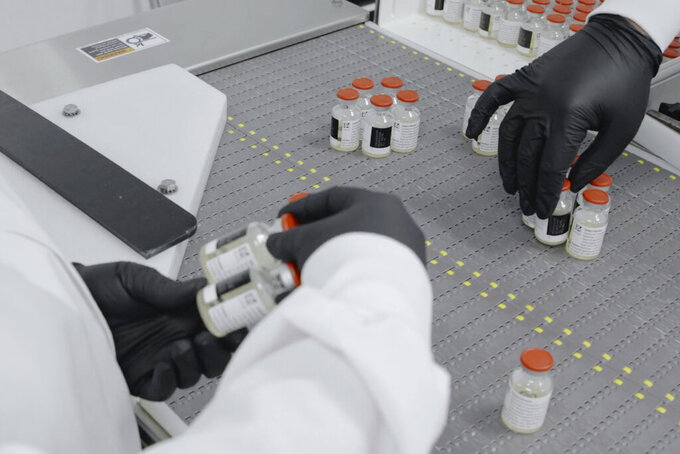 In this undated image from video provided by Regeneron Pharmaceuticals on Friday, Oct. 2, 2020, vials are inspected at the company's facilities in New York state, for efforts on an experimental coronavirus antibody drug. Antibodies are proteins the body makes when an infection occurs; they attach to a virus and help the immune system eliminate it. (Regeneron via AP)

WASHINGTON (AP) — They’re not cures and it’s not likely that everyone will be able to get them as President Donald Trump has suggested. But experimental antibody drugs like the one Trump was given are among the most promising therapies being tested for treating and preventing coronavirus infections.

Eli Lilly and Regeneron Pharmaceuticals Inc. are asking the U.S. government to allow emergency use of their antibody drugs, which aim to help the immune system clear the virus. The medicines are still in testing; their safety and effectiveness are not yet known.

Trump is among fewer than 10 people who were able to access the Regeneron one under “compassionate use” rules, without enrolling in a study.

Q: How do they work?

A: Antibodies are proteins the body makes when an infection occurs; they attach to a virus and help it be eliminated. Vaccines mimic an infection to spur antibody production. But it can take several weeks after a vaccine or natural infection for the most effective antibodies to form. The experimental drugs are concentrated versions of specific antibodies that worked best against the coronavirus in lab and animal tests. In theory, they start helping right away. The one-time treatment is given through an IV — it's not like a pill that people can take at home.

Q: How do the drugs differ?

A: Regeneron is using two antibodies to enhance chances its therapy will work even if the virus evades one. The company made a successful Ebola combo antibody treatment this way. Lilly is testing two different antibodies -- one with the Canadian company AbCellera and another with a Chinese company, Junshi Biosciences — individually and in combination. Others testing similar drugs are GlaxoSmithKline and Vir Biotechnology Inc., which says it has engineered antibodies to last longer than they usually do. Amgen, Adaptive Biotechnologies and the Singapore biotech company Tychan Pte Ltd. also have studies underway.

A: Eli Lilly and Regeneron have asked the Food and Drug Administration for emergency authorization. During public health emergencies the FDA can speed drugs to market based on a lower standard of evidence than is normally required. Drugmakers need only show that the expected benefits of their therapies outweigh the risks for treating COVID-19. There is no deadline for the FDA to rule on the drugs, but it typically makes decisions on such emergency applications within days or weeks.

Q: Who would get them?

A: Researchers are still trying to determine the best candidates for antibody treatment. Some studies involve newly infected people to see if early treatment can lower the risk of becoming sick. Other studies in hospitalized patients aim to prevent serious illness, complications or death. Researchers also are testing these drugs to try to prevent infection in people at high risk of it, such as health workers, housemates of people with COVID-19, and nursing home workers and residents.

Q: Will there be enough for everyone?

A: It depends on how potent the drugs prove to be, something still being studied. If a high dose is needed to be effective, it will mean that fewer people can be treated with limited supplies. Regeneron says it has enough doses for approximately 50,000 patients and expects 300,000 available within the next few months. Under a $450 million contract, the federal government has agreed to buy initial supplies of Regeneron’s drug and distribute them at no cost to U.S. patients. Lilly says it expects to have 1 million doses this year of the single antibody that it submitted to FDA. However, the company’s research has focused on a combination of two antibodies to treat COVID-19 patients. Lilly said it expects to have just 50,000 doses of that combo this year.

Q: What’s the evidence that they work?

A: Lilly and Regeneron have revealed only partial results in news releases; they haven’t been published or vetted by independent scientists. Lilly said Wednesday that its two-antibody combo reduced symptoms, the amount of virus, hospitalizations and ER visits for patients with mild or moderate COVID-19. The results are an interim look at a mid-stage study in which 112 people received the antibodies and 156 got a placebo. The amount of virus was significantly lower 11 days later in those given the drug -- the main goal of the study. About 5.8% of patients given placebo required hospitalization or an emergency room visit versus 0.9% of those given the antibodies. Previously, Regeneron said its drug reduced the amount of virus and symptoms in non-hospitalized patients. The partial results came from the first 275 patients enrolled in ongoing studies.