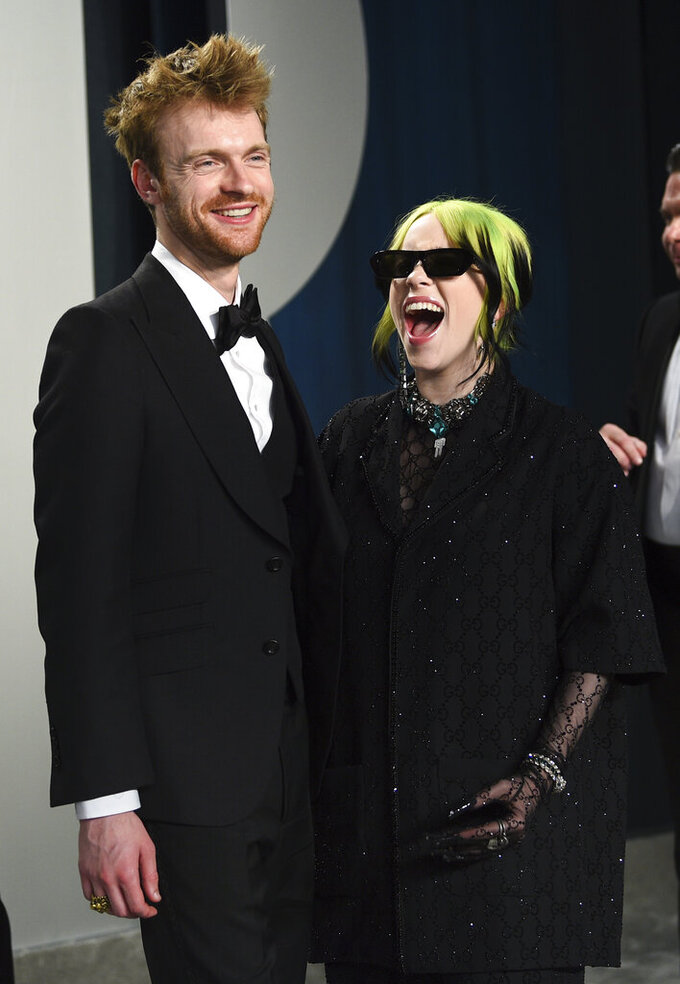 FILE - Finneas O'Connell, left and Billie Eilish arrive at the Vanity Fair Oscar Party in Beverly Hills, Calif. on Feb. 9, 2020. O'Connell has been named one of The Associated Press' Breakthrough Entertainers of 2020. (Photo by Evan Agostini/Invision/AP, File) 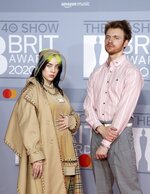 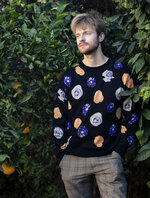 NEW YORK (AP) — Onstage, Finneas and Billie Eilish come across like a seasoned, veteran musical duo. With her beautifully aching and raw tone singing relatable and profound lyrics in the starring role, Finneas brilliantly supports on piano or guitar, giving her voice much room to shine.

That was how the pair spent last year on the road promoting Eilish's debut album, which went on to connect with audiences around the world and helped make the then-17-year-old a breakout star.

But as Eilish’s star power grew brighter, so did Finneas’. He was recognized for producing and engineering his baby sister’s music. He also co-wrote the hits that made her famous — some of them he even wrote alone.

The 2020 Grammy Awards solidified this: In January, Eilish won five honors — making her the night’s second big winner, only to be behind Finneas.

He won six awards and became of one of the youngest acts to be named non-classical producer of the year at 22.

It kicked off a productive year for the artist: In 2020 he re-released his debut EP, dropped the theme song for the upcoming James Bond film with Eilish, earned three nominations for the 2021 Grammys and began lending his talents to folks who don't share his last name, including Justin Bieber, Demi Lovato, Halsey, Kid Cudi, Ben Platt and Tove Lo.

The success has easily made Finneas one of The Associated Press’ Breakthrough Entertainers of the Year, a list that also includes “Watchmen” actor and Emmy winner Yahya Abdul-Mateen II and breakout President Donald Trump lip-sync-er Sarah Cooper.

Finneas is the white-hot producer on the pop music scene, and he’s got a few collaborations cooking up, though he’s not spilling all the tea: “It’s like when they interview ‘Avengers’ cast members — they can never say anything," he said.

He’s fielding calls left and right from artists about getting together to make magical music, but Finneas said he’s careful about who he works with.

“The baseline is — if it’s something that I like — I’m interested. I don’t play a game with that. I’m not trying to do the thing that’s the best strategic career move,” he said. “Sometimes there’s a huge opportunity and I’m like, ‘I don’t like their music, I can’t do it.’ The other criteria is that I do try to work with people who I know I’m going to be effective and helpful with. Some people don’t need me.”

One of the calls Finneas took was from good friend Benny Blanco. The hitmaker who has collaborated with Bieber on the successes “Love Yourself” and “Cold Water” said the pop star’s camp was looking for ideas for his next album.

“I was like, ‘Gosh, I think being the most famous person in the world, consistently, has to be the most isolating thing. I’d seen it to some degree with my sister, but even then, I was kind of there. She has this brother, not that I’m anywhere near as famous as her, but I’m next to her during the whole thing. For Bieber, especially because he started even younger than Billie — even though Billie was young when she started — Bieber was like the most famous at 15,” he said.

“The biggest sales artist in the world is singing a song about being commercially successful and deeply anxious and unhappy — I’m very proud to play a small role in that,” Finneas said.

This year, Finneas helped Lovato direct a song to President Donald Trump with “Commander In Chief,” which features the lyrics: “We’re in a state of crisis, people are dyin’ while you line your pockets deep/Commander in Chief, how does it feel to still be able to breathe?”

The year impacted heavily by the coronavirus pandemic and racial injustice also fueled Finneas’ songwriting: The Black Lives Matter movement and Broadway star Nick Cordero’s death due to COVID-19 inspired him to write and release “What They’ll Say About Us,” giving Finneas’ his biggest solo success on the Billboard rock charts.

“It’s hard to reflect on this year in a succinct easy way. It’s such a multi-faceted time. In some ways, you could define this year by coronavirus alone, but then you’d also have to define the year as the murder of George Floyd and the movement across the country and across the planet,” Finneas said.

“I think the name of my game was reassessment and reevaluation of how much stuff I was taking for granted before this year, or undereducated about or unaware of. This year’s been a learning experience for me and my friends and taking stock in the simple things that you don’t necessarily think about every day, otherwise, but they have been so on my mind this year. That’s the summation of my year — counting smaller blessings that mean everything to me.”