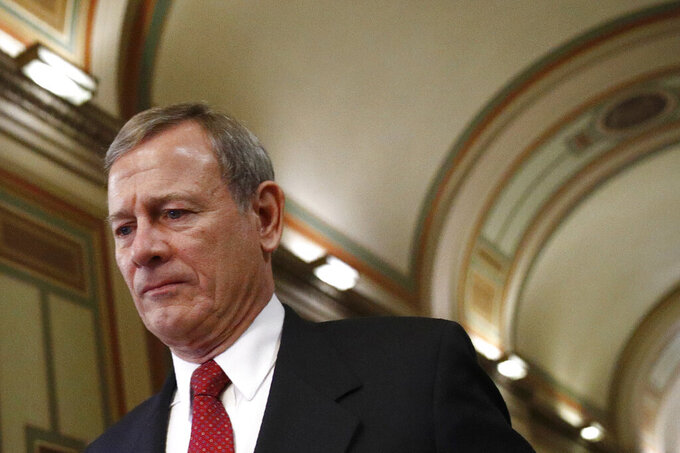 FILE - In this Jan. 29, 2020, file photo Chief Justice of the United States John Roberts departs at the end of the day in the impeachment trial of President Donald Trump on charges of abuse of power and obstruction of Congress on Capitol Hill in Washington. (AP Photo/Patrick Semansky, File) 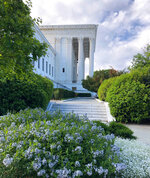 WASHINGTON (AP) — The Supreme Court is holding its second week of arguments by telephone because of the coronavirus pandemic, with audio available live to audiences around the world.

The highest profile cases are up this week, including two on Tuesday involving the potential release of President Donald Trump's tax returns. On Monday, the justices heard two cases, including one from California about the appropriate separation between church and state.

Some observations, trivia and analysis from our Supreme Court reporters (all times local):

The Supreme Court has wrapped up its fourth day of historic arguments over the phone because of the cornorvirus pandemic. The justices heard two cases Monday. The first was a case about whether an Indian tribe retains control over a vast swath of eastern Oklahoma. The court tried to resolve it in 2018 but ultimately didn’t.

The second case they heard Monday involved two ex-Catholic school teachers and how broadly Catholic schools and other religious employers should be exempt from certain lawsuits by employees.

The court ruled eight years ago that religious employees of a church cannot sue for employment discrimination, but did not define exactly who would be covered.

The pandemic forced the high court this month to hear arguments over the phone for the first time. The court is hearing a total of 10 cases over six days, including President Donald Trump’s bid to keep certain financial records private.

The Supreme Court has has begun hearing arguments in Monday’s second case, a dispute involving a pair of former 5th grade Catholic school teachers and whether religious schools are exempt from anti-discrimination law.

The court ruled eight years ago that religious employees of a church cannot sue for employment discrimination, but did not define exactly who would be covered.

The Trump administration is siding with the Catholic schools in California in urging the court to rule that the teachers count as religious employees and should not be able to sue for employment discrimination.

The questions Justice Neil Gorsuch is asking in a case before the Supreme Court suggest he’s favorable to Native Americans who claim a big chunk of eastern Oklahoma remains an Indian reservation. Gorsuch is likely the pivotal vote in this case. He sat out the last time the court heard a case about the same issue and eight other justices were split. Gorsuch didn’t participate in the previous case because he’d participated at an earlier stage when he was a judge on the 10th U.S. Circuit Court of Appeals in Denver.

Also happening in Monday's arguments: Justice Samuel Alito seems to be having difficulty with his phone. The chief justice called his name twice and passed him on the first round of questioning when he didn’t respond. Justice Sonia Sotomayor had difficulty taking herself off mute last week. Also, Justice Stephen Breyer becomes the first to “pass” and not ask a question when it comes to his turn at one point in the argument.

The Supreme Court has begun its second week of arguments by telephone.

Ian Gershengorn is the first of four attorneys arguing in a case about whether an Indian tribe retains control over a vast swath of eastern Oklahoma.

Gershengorn told The Associated Press in a recent interview that he planned to make what is his 16th Supreme Court argument from the guest bedroom of his home in Bethesda, Maryland. He said he wouldn't memorize his opening as he usually does, because the justices won’t be able to tell if he’s looking at notes.

Gershengorn said in previous arguments he'd try to relax by looking around at the marble courtroom and friezes of the Supreme Court and think: “this is pretty awesome that I get to do this for a living.” Looking around his guest bedroom would inspire different thoughts, he said, like: “This is a really weird way to do this.”

Gershengorn said he wouldn't change his before-argument breakfast: a muffin and a Diet Coke.

The first case the Supreme Court will hear Monday is about whether an Indian tribe retains control over a vast swath of eastern Oklahoma. The court tried to resolve it in 2018 but ultimately didn’t.

Both sued their former employers, with Morrissey-Berru alleging age discrimination and Biel alleging disability discrimination. A lower court said both lawsuits could go forward, but the schools have appealed and have the support of the Trump administration.

Ready for round 2? The Supreme Court is hearing arguments by phone for a second week. Arguments are being held on Monday, Tuesday and Wednesday and, like last week, they will be livestreamed.

If you followed along last week, you know how Monday's telephone argument will go: The justices are asking questions in order of seniority with Chief Justice John Roberts going first. Justice Clarence Thomas asked questions during each argument last week.

And Justice Ruth Bader Ginsburg is out of the hospital after a gallstone infection. It didn't stop her from hearing cases from her hospital bed last week.