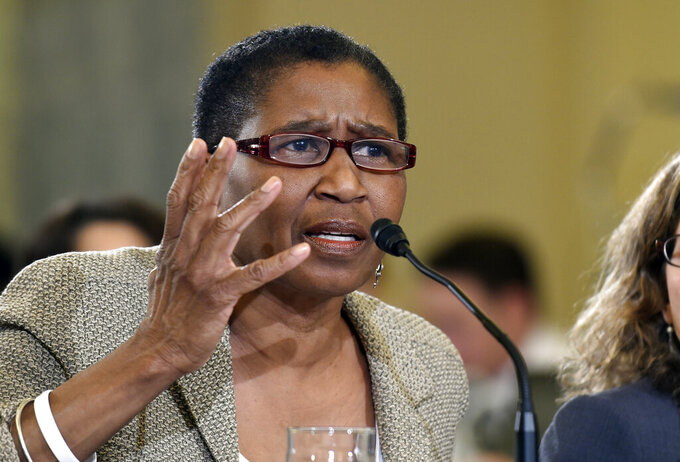 FILE - In this Dec. 2, 2014, file photo, Michele Roberts, executive director of the National Basketball Players Association, testifies on Capitol Hill in Washington. Roberts planned on being in the NBA’s restart bubble at Walt Disney World for a few days. Three weeks, at the most. She never left. (AP Photo/Susan Walsh, File)

LAKE BUENA VISTA, Fla. (AP) — Michele Roberts planned on being in the NBA’s restart bubble at Walt Disney World for a few days. Three weeks, at the most.

The executive director of the National Basketball Players Association will be in the bubble from start to finish, meaning she’ll be there when either the Los Angeles Lakers or Miami Heat get their hands on the Larry O’Brien Trophy at the conclusion of the NBA Finals that resume Friday night. Her reason for staying: Her realization of how much work that could be done on matters relating to social justice and the fight against racial inequality, along with the chance to connect with so many players individually on such a regular basis.

“I wouldn’t trade having done this for the world,” Roberts said in an interview with The Associated Press. “You have a chance to interact at a level that I, through the last 6 1/2 years, have never had. We’ve had our meetings, around each other for a day and a half or two days, but this was different. It’s been worth every second of it. Hard, but worth every second.”

Players have raved about her presence, how much it meant to them. And outside of the Lakers and Heat, she’s been at Disney longer than any player.

It took weeks of intense talks just to come up with the health and safety rules for the bubble, not to mention the format. There were negotiations to get “Black Lives Matter” painted on the courts and for the league to make the unprecedented allowance for social expressions to be sewn onto the backs of jerseys. And there was the very delicate three-day period in late August when players, led by the Milwaukee Bucks, considered abandoning the season because of ongoing issues related to police brutality toward Black people in this country.

“The struggle has predated my life. Sadly, it’ll probably postdate my life,” Roberts said. “What I think the platform has done, is given players an opportunity to contribute to the struggle, to help to move the needle that is so stubbornly wanting to be moved at a pace much less rapid than we’d like. I think they’ve done that.”

“She performs well in any environment, and it seems like the uglier the environment, the higher she performs,” said Miami guard Andre Iguodala, who also serves as a NBPA officer. “And especially when it gets tense and it gets pressure time. That’s when she shines brightest. We’ve had some tough days even before we got to the bubble and it really wasn’t looking good, and she was a voice of reason.”

Roberts touched on many topics in the interview with AP, including:

Once the season ends, or at least shortly afterward, the NBPA and the NBA -- meaning Roberts and NBA Commissioner Adam Silver, primarily — will start trying to figure out what the finances for next season will look like. The NBA will miss its revenue target this season by hundreds of millions of dollars — not just because of the pandemic, but because of the effect of the now-frosty relationship the league has with some Chinese business partners including some television outlets.

Players already are feeling some effects, such has having 25% of their checks going into escrow in recent months. The salary cap, which was forecast to rise to around $115 million next season, is now expected to remain around this season’s $109 million total — or perhaps less.

“We have to talk about money and what we’re going to do about this reduced revenue situation,” Roberts said. “It can be easily resolved if everyone agrees.”

Her goal, for now, is to simply find a way to get into next season. Start there, and the rest could be easier to figure out.

“If there’s an effort to do more than that, then it’s going to be more complicated,” Roberts said. “Then we’re back to full-blown CBA negotiations. And that’s not something that’s going to be resolved in a couple of weeks or a couple of months.”

There are five current vacancies, and Black candidates like Tyronn Lue and Sam Cassell — both, most recently, were assistants for Rivers with the Los Angeles Clippers — are often mentioned as candidates.

But Roberts said the union clearly would like to see improvement, not just on sidelines but in front offices.

“Before we even restarted one of the agenda items in our conversations with the league related to the questionable diversity of both the league’s front offices and the team’s front offices to include coaches, general managers, team presidents,” Roberts said. “And one of the things we all agreed we needed to do was to try to figure out a way to improve those numbers. We agreed that there was room for improvement, and now we are where we are. Not only have we not improved, but the numbers have gotten worse.”

Make no mistake: When her second four-year term as executive director is up in 2022, Roberts is retiring.

The union announced that it was beginning a search for her replacement back in March, less than a week before the league had to shut down because of the pandemic. The search was halted a couple months later.

“I’m not going to leave until I think that we’ve returned to some semblance of stability,” Roberts said.

She doesn’t think that will disrupt her plans, however.