AP PHOTOS: COVID-19 tests at Olympics not just for people 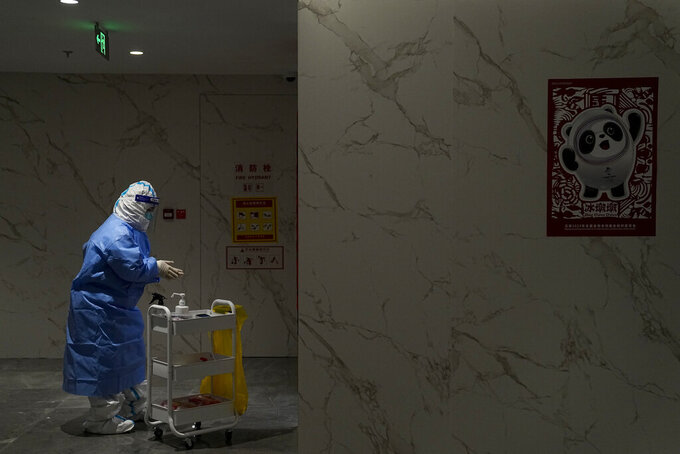 A medical worker disinfects her hands while collecting samples for COVID-19 testing in the main media center at the 2022 Winter Olympics, Friday, Feb. 11, 2022, in Beijing. (AP Photo/Jae C. Hong)

It’s all part of the elaborate protocols to prevent the spread of the virus at the Games that also include limiting the movement of athletes and others to dedicated Olympic locations and daily testing for everyone inside that “closed loop" of sites.

The sight of workers testing surfaces might be surprising for many international visitors, since health experts say the virus spreads mainly through the air when infected people talk, cough or sneeze. They note the virus can't survive or multiply on surfaces.

Still, Deb Fuller, a virus expert at the University of Washington, says the testing could be another way to determine if the virus is getting the bubble. She notes studies have shown that traces of dead virus can linger in rooms where infected people have stayed.

“They may be testing the surfaces as a marker for whether virus was in the air recently,” she said.

If that’s the case, she notes the limitations of the testing. A positive result might indicate where infected people might've been. But negative results couldn't rule out the possibility, since workers could have just missed the spot that got sneezed or coughed on.

Alternately, Fuller says the testing could be for show or habit, with some places still being more cautious about spread from surfaces.