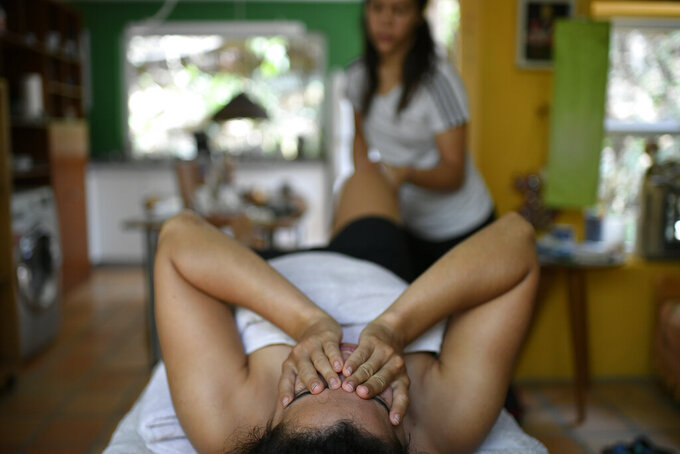 Venezuelan Olympic medalist Stefany Hernandez, a BMX racing cyclist, reacts to pain during a muscle relaxation session with her physical therapist at her home in Caracas, Venezuela, Monday, May 25, 2020. Despite a quarantine to curb the spread of COVID-19, Hernandez trains three times a week in hopes of qualifying for the 2021 Tokyo Summer Olympics. (AP Photo/Matias Delacroix)

CARACAS, Venezuela (AP) — Stefany Hernández zips on her bike across a vast, empty boulevard in Venezuela's capital, getting in training where she can find it.

A 2015 world champion bike motocross racer, she's trying to prepare for the Tokyo Olympics, now delayed until next year, while coping with restrictions imposed due to the coronavirus pandemic. The BMX paths are all closed, so the largely vacant streets will have to do.

To get at least a glimpse of the mountains, she wrestles her bike through a window onto a flat rooftop and practices maneuvers there.

The delayed competition has one benefit: helping her recover from a foot injury. A personal trainer comes to her duplex to help with treatments that relax some of her muscles and build elasticity and strength in others. Hernández, 28, has already been to two Olympics, winning bronze at Brazil in 2016.

Elsewhere in Caracas, other athletes have Olympic dreams — and perhaps their only chance at a medal. A two-time world champion in karate, 39-year-old Antonio Díaz-year-old delayed retirement for a crack at the Tokyo Games, which will include karate as a one-time added sport. It's not usually part of the Olympic program.

Díaz had to shut down the commercial dojo he owns. He trained at the vacant dojo for awhile, but the country's gasoline shortage has led him to do more practice at home — where he can be with his wife and child, who was born in August.

“It's allowed me to be with my baby all day,” Díaz said.

Andrés Madera, a gold medalist at the Pan American Games in Lima, Peru, last year, is also shooting for a spot on the karate team in Tokyo.

“It will be the first and perhaps the last time” karate will be on the program," said Madera, who manages to give some classes by video link over the internet.