AP PHOTOS: Rome churches beckon with art and no 'hordes' 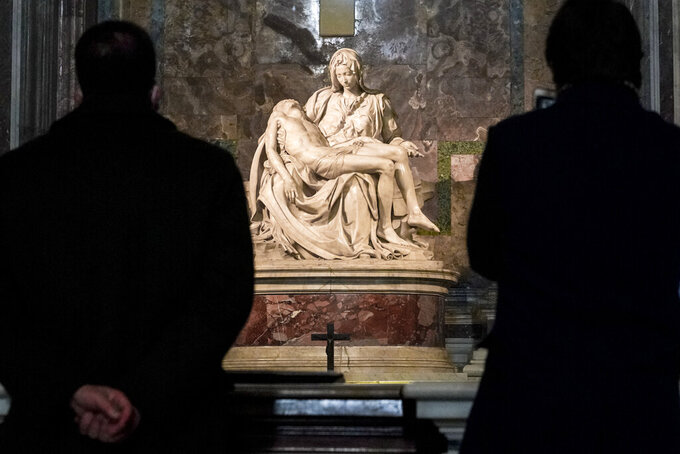 Visitors admire the marble sculpture "The Piety", made in 1499 by Italian sculptor Michelangelo Buonarroti, inside St. Peter's Basilica, at the Vatican, Monday, Dec. 14, 2020. Like elsewhere in Europe, museums and art galleries in Italy were closed this fall to contain the spread of COVID-19, meaning art lovers must rely on virtual tours to catch a glimpse of the treasures held by famous institutions such as the Uffizi in Florence and the Vatican Museums in Rome. However, some exquisite gems of Italy's cultural heritage remain on display in real life inside the country's churches, some of which have collections of renaissance art and iconography that would be the envy of any museum. (AP Photo/Andrew Medichini)

ROME (AP) — Like elsewhere in Europe, museums and art galleries closed in Italy in the spring and again in the fall to contain the spread of COVID-19, leaving virtual tours as the best option for art lovers who wanted to see the treasures held by institutions such as the Uffizi Galleries in Florence and the Vatican Museums in Rome.

But some exquisite pieces of Italy's cultural heritage remain on display for in-person viewing inside the country's churches, which stayed open during the autumn resurgence of the virus. Some churches hold collections of Renaissance art and iconography that would be the envy of any museum.

Residents of Rome — and, in a normal year, tourists — can admire masterpieces by Michelangelo and Caravaggio in the city's lavish cathedrals and churches.

San Luigi dei Francesi, the French community church in Rome, has three majestic works by 16th century painter Michelangelo Merisi, known as Caravaggio. Visitors who deposit a coin to illuminate the church's Contarelli Chapel can enjoy the paintings, centered around the life of St. Matthew.

Two other Caravaggio paintings, depicting the crucifixion of St. Peter and the conversion of St. Paul on the way to Damascus, can be admired in the Santa Maria del Popolo church together with “The Assumption of the Virgin,” by Annibale Carracci.

Works by another Renaissance master, Raphael, can be found in several churches in Rome, including Santa Maria della Pace. That's where the artist painted “Sybils," a fresco also known as "Sybils receiving instruction from Angels,” starting around 1514.

The pandemic interfered with plans to mark the 500th anniversary of Raphael's death. In Rome, the largest Raphael exhibition opened in March and closed three days later when the Italian government ordered a nationwide lockdown. The exhibit reopened in June as restrictions were lifted and ran until the end of summer.

A work of art in its own right the Vatican's St. Peter’s Basilica is packed with masterpieces, including Michelango's "Pieta," a touching sculpture of the Virgin Mary holding the dead body of Christ.

That Italian church-goers now can admire art without having to compete with the usual throngs of tourists is a mixed blessing, Mazzanobile said.

“Surely the pandemic has allowed us to reflect on the hordes of tourists who would be now invading, sometimes in an unworthy way, the streets and galleries of museums," she said. "But I certainly believe that, like me, most of the guides and tour leaders are waiting for those hordes."