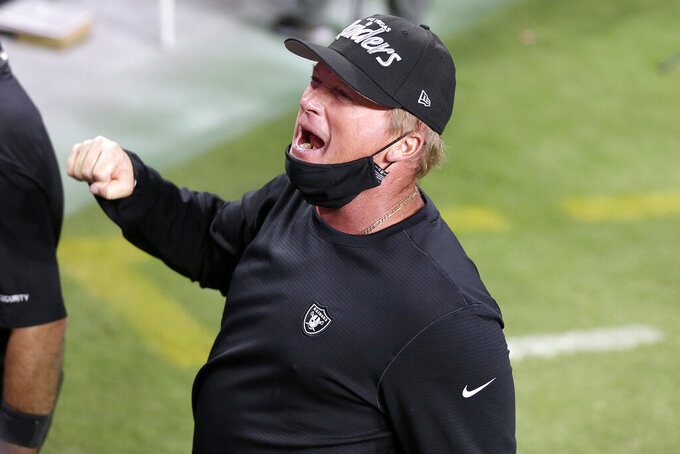 LAS VEGAS (AP) — Two more NFL head coaches and their teams have been fined for not wearing masks on the sideline.

A person with knowledge of the punishment said Tuesday that Jon Gruden of the Raiders and Sean Payton of the Saints were each fined $100,000 for not wearing masks on the sideline on Monday night.

The person, who spoke on condition of anonymity because the league wasn’t announcing specific fines, said the teams were also fined $250,000 for the infractions. The league already handed out similar punishments to Denver’s Vic Fangio, San Francisco’s Kyle Shanahan and Seattle’s Pete Carroll, the person said.

Gruden apologized after the game for failing to wear his mask and also acknowledged for the first time that he had the coronavirus during the offseason.

“I don’t want to get into it really,” he said Tuesday. “It wasn’t pleasant. It was reported that I made up that I had the virus and it really ticked me off, because I would never do something like that. But it’s a very serious matter, and obviously I’m sensitive about it. It was a tough deal, that’s for sure, just like everybody else that’s had it.”

Payton also had the coronavirus this offseason.

League rules require coaches to wear coverings over their mouths and noses at all times. Players are exempt from these protocols.

NFL Network and ESPN first reported the fines for Gruden and Payton.